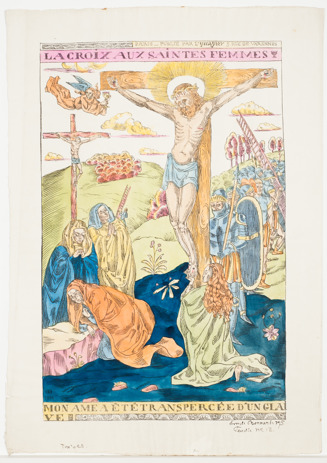 In the Paper Lab this month is a group of prints by artists who made an impact on Vincent van Gogh and his art.  This print by his close friend Émile Bernard is a zincograph that has been hand colored with watercolor.  Bernard’s zincographs are similar to lithographs, but he used a zinc plate rather than traditional limestone for the matrix (the surface on which the design is drawn before printing it onto paper).  It is likely that Bernard colored the print himself, although some prints in the edition of 25 were left uncolored.  The subject, style, and even the handmade rag paper give this print the feeling of religious prints of a much earlier era.  See this print and find out Van Gogh’s opinion of his friend’s work in Unlocking Van Gogh’s World, opening October 15.

Émile Bernard (French, 1868-1941), The Cross with the Holy Women/ My Soul has Been Pierced by a Sword, 1894, hand-colored zincograph, Mr. and Mrs. Ross W. Sloniker Collection of Twentieth Century Biblical and Religious Prints, 1958.77