November is Native American Heritage Month–a time to celebrate rich and diverse cultures, traditions, and histories and to acknowledge the important contributions of Indigenous peoples.

The Cincinnati Art Museum began acquiring Native American objects before it opened its doors in 1886 thanks to a handful of key donors who understood the importance of preserving objects made by our nation’s first inhabitants. In fact, many of the artifacts predate The Exposition of Indian Tribal Arts, the first exhibit of Native American Art held in New York City in 1931. The Exposition’s organizers included American artist John Sloan, anthropologist Oliver LaFarge and Amelia Elizabeth White, an activist and gallery owner. White championed native peoples’ rights and encouraged them to make artistic objects in the tradition of their ancestors. Her contribution of more than 130 objects, including some of the earliest Pueblo paintings, was significant in building the museum’s collection. Holdings encompass notable examples of traditional and contemporary Pueblo pottery, including works by Virgil Ortiz and Maria Martinez. In particular, the peoples of the Great Plains, Pueblos, Northwest Coast and Mesoamerica are represented by textiles, dress, and pottery.

Enjoy these works by indigenous peoples in the museum’s permanent collection. 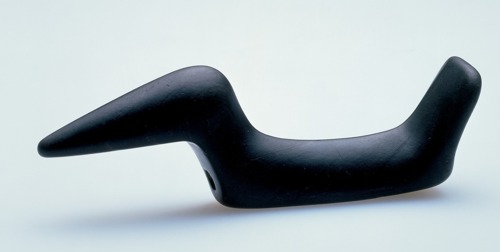 Toward the end of the Archaic period (4000–1500 B.C.), a variety of ground and polished stone objects made their appearance in eastern North America. One distinctive form, known as the birdstone, was characterized by an elegant, simple shape depicting a wingless bird with a short, upturned tail and a flat-bottomed body. Its precise function remains unclear. Like the “bannerstones” of an earlier period, it may have served as a weighted appendage for an atlatl, a launching stick for spears. The longitudinal perforation suggests that it is designed to be attached or secured to an implement of some sort.

The art museum’s birdstone is a particularly refined example of its type with its elegant form and highly polished surface. Like most birdstones, it shows no sign of use, this fact points to a ceremonial rather than a practical function. It may have served a magical purpose, perhaps as an effigy of an actual bird decoy. The distribution of the birdstone over an area encompassing the Great Lakes basin and the Upper Ohio River Valley–a place of vast wetlands rich with waterfowl–supports this idea. A common grave good, the birdstone was valued as a funerary offering. Through an elaborate network of exchange, it circulated widely through the Eastern Woodland region of North America. 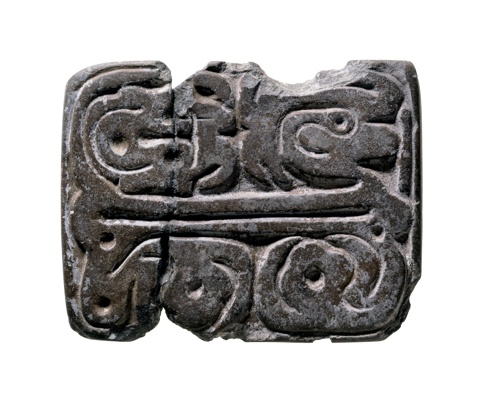 During the Early Woodland period, in the final centuries of the first millennium B.C., the native population of the central Ohio River Valley flourished under the Adena culture, known from its principal site near present-day Chillicothe in southern Ohio. Like the Hopewell peoples who followed them, the Adena were great mound builders; hundreds of their ceremonial funerary complexes were found over an area extending from southeastern Indiana to southwestern Pennsylvania.

One of the distinctive features of the late Adena complex in Kentucky and Ohio is the presence of small, rectangular stone tablets incised with curvilinear designs. The museum’s example is of one of thirteen discovered so far; all come from mounds in Ohio, Kentucky, and West Virginia. Like most pieces in the group, the art museum’s tablet bears a highly stylized representation of what appears to be a raptor, of bird or prey. Raptorial birds, symbols of the sky and the celestial sphere, were represented so frequently that they must have played an important symbolic role in the Adena and later Hopewell cultures.

Traces of pigment found on several of these tablets indicate that they were used as stamps, possibly for decorating organic materials such as textiles or the walls of bark houses. They also may have served as body stamps designed to distinguish and identify members of a particular cult or kin group.

Listen to a museum staff member discuss this artwork in our CAMLook episode published on June 12, 2020. 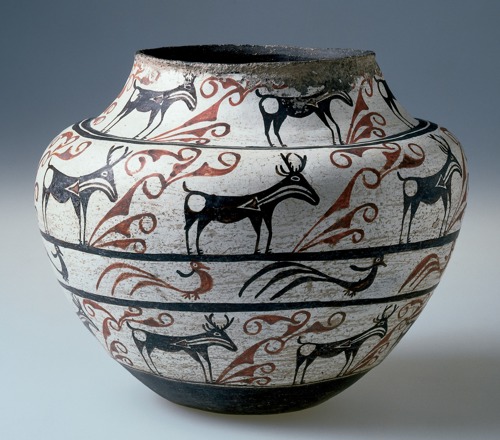 The ceramic arts best exemplify the extraordinary cultural continuity that is the hallmark of the Native American Southwest. Modifications in materials and technology aside, the region’s pottery has remained remarkably stable from its first appearance around 300 B.C. to the present. While nearly all Southwestern Native American participated in the pottery-making tradition, the Pueblo peoples of northwestern New Mexico, with their longstanding ceramic history, surpassed all others.

One of the best-documented and most graceful of Pueblo ceramic traditions is that of the Zuni people. Beginning in the mid-nineteenth century, Zuni polychrome painted pottery evolved from an integrated geometric tradition based on the triangle to a more ornate style emphasizing the curvilinear. The museum’s vessel exemplifies the latter tradition, the hallmark of which was a line of animals. The primary subjects, arranged in concentric friezes, consist of small birds and deer, which are presented against a background of subsidiary scrollwork.

An essential aspect of the Zuni-style deer is the red arrow of life or beath, extending from its mouth to its heart. This characteristic Zuni feature, the heart line, was borrowed by other Pueblo peoples, including the Hopi and the Acoma.

The Cincinnati vessel is an olla, or water jar, acquired by James Stevenson during a Smithsonian Institution ethnographic expedition dispatched to the Zuni in 1879. It was given to the Cincinnati Art Museum in 1885 by the Smithsonian’s United States National Museum in exchange for Cincinnati Rookwood Pottery.

This artwork is currently on view in Gallery 216. 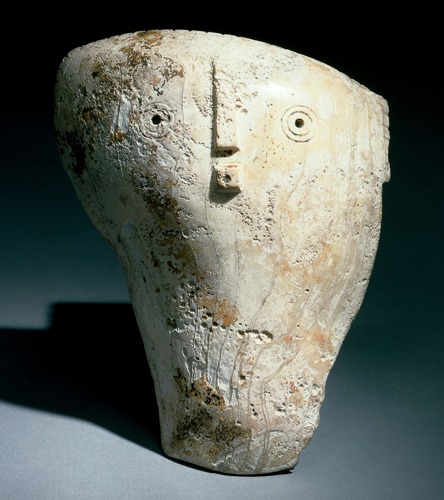 In the last centuries before the European’s arrival, a new cultural tradition evolved in the Mississippi Valley from the mound-builder cultures of the preceding Woodland period. Stimulated by renewed contacts with Mesoamerica–Mexico and Central America–the Mississippians developed a civilization and culture with a highly sophisticated ceremonial structure and belief system based on the concept of ritual death and regeneration. This belief system, known as the “southeastern ceremonial complex,” was distinguished by an elaborate iconographic tradition recorded on engraved shell pendants, drinking cups, and embossed copper plaques.

The museum’s shell mask is one such manifestation of this tradition. Designed as a gorget–a pendant worn on the chest–it depicts a stylized human face with staring, pierced-hole eyes and a nose and mouth in relief. Such masks, which were contained in sacred war bundles, reflect the importance of warrior cults in Mississippian society. 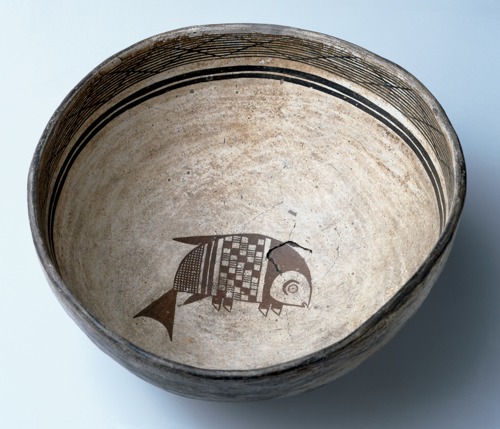 The Mimbres people, inhabitants of the highlands and deserts of southern New Mexico, formed part of a vast trade network in the greater Southwest. The pottery created by this branch of the Mogollon culture is distinctive in prehistoric Southwestern ceramic art. The bowls, produced by village women, fulfilled both a practical and a ceremonial function. The most finely decorated examples, which represent only a small portion of the output of painted pottery, served a funerary purpose. Excavations have revealed that such bowls were frequently placed over the head of the deceased in burials situated directly beneath the floor of the family house.

The pottery of the Mimbres, made in a distinctive black-on-white style, is remarkable for its vibrant, symbolic depictions of humans and animals. Some pieces, painted with multiple figures, tell a story; most, however, like the museum’s vessel, show a single figure, usually an animal, either individually or paired. The subjects–rabbits, lizards, insects, bats, birds, fish, mountain sheep–are depicted whimsically. The museum’s bowl features a fish, a common motif on such painted bowls. Because water was a matter of great concern to the Mogollon farmers of the arid Southwest, many Mimbres designs include references to animals that live in the water. 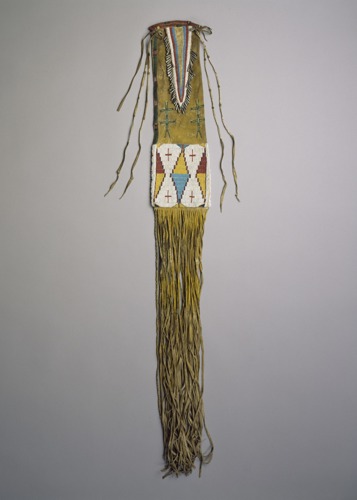 The tobacco bag is an important personal accessory for Native Americans who live in the Western Plains. Smoking tobacco is a sacred activity used to communicate with spirits; the smoke carries one’s prayers to the Creator. This tubular bag was designed to hold both tobacco and the stone bowl of the pipe, when not in use.

The ornamental decoration on this bag is typical of the Cheyenne people located in the southern Plains. The Cheyenne favored triangular designs outlined by stepped contours. The long deerskin fringe is also characteristic of their workmanship.

The woman who beaded this bag created an hourglass motif that alternates with triangles. The crosses within the hourglass mark the four cardinal directions. At the top of the main panel are two beaded dragonflies, admired by the Cheyenne for their speed, agility, and ability to conceal themselves. The beaded color combinations on this bag change from front to back, incorporating white, yellow, blue, and red. 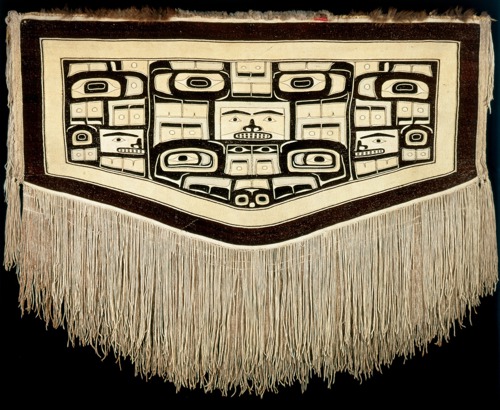 The Chilkat blanket is an important part of a chief’s regalia among the Tlingit and neighboring tribes of the Alaskan coast. The dance blanket, called nakheen (“fringe about the body) by the Tlingit, is an indicator of rank and wealth. The term “blanket” is a misnomer; the nakheen was a ceremonial garment designed to be wrapped around the body. When the wearer danced, the blanket’s long fringe swayed with the movement. The privilege of wearing a dance blanket is inherited; both men and women are potential recipients.

Aside from its function in ceremonial dance, the nakheen served as a gift in the potlatch, a complicated gift-giving ceremony usually performed by a chief to confirm his rank and privilege among his people. The guests’ acceptance of the blanket and other gifts was an acknowledgement of the host’s rights. The nakheen also could serve as a burial shroud.

Woven of durable mountain goat hair and tough cedar bark, the Chilkat blanket is a masterpiece of construction and design. The blankets are created in cooperation: men draw the designs and women weave it. The design is painted onto a full-size wooden board, which the weaver uses as a template. The format is standardized, consisting of a central totem and neighboring motifs in mirror image. The museum’s blanket features the clan or house emblem of the diving killer whale, flanked by the crest of the raven, one of two Tlingit tribal subdivisions. The Tlingit weaver’s concept of totemic design is highly stylized: the makers dissected the animal subjects into their basic parts (eyes, ears, teeth, fins) and then reconstructed them. They presented the subjects in both profile and frontal view.

The finished blanket is the result of a painstaking process. From the spinning of the yarn to the creation of the design, a finely woven blanket can take more than six months to complete.

Listen to a museum staff member discuss this artwork in our CAMLook episode published on November 30, 2020.

As a step toward honoring the truth and achieving healing and reconciliation with those indigenous peoples who were affected most by the Doctrine of Discovery and broken treaties, we acknowledge the traditional Shawnee and Myaamia lands on which we now stand, and on which the city of Cincinnati was built. Language provided by the Greater Cincinnati Native American Coalition