by By Dr. Hou-mei Sung 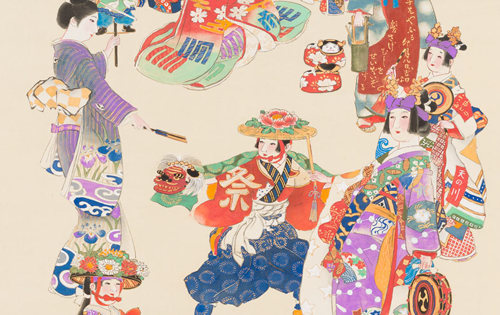 The Museum recently received a gift of four magnificent Japanese paintings from the former collection of Howard and Caroline Porter. One of them is Spring Festivals by Utagawa Kōshū. This painting depicts major Japanese spring festivals using colorful doll-like figures. Starting from the upper right a young couple dressed in formal Japanese costumes is walking into the festive scenes. Below them, a young mother with a baby on her back celebrates Buddha’s birthday (April 8th) by holding a small portable shrine hanging from a pole decorated with flowers on top and a white elephant below. Inside the shrine is an image of a miniature baby Buddha. This clearly refers to the ritual performed on Buddha’s birthday in temples by sprinkling the baby Buddha statue with amacha, tea made from hydrangea leaves. The statue is often accompanied by a carriage decorated with a white elephant. Reference to this specific festival is also made in the poem written in gold on the mother’s apron. The rest of the festivals and activities depicted here include: Hinamatsuri, or the doll festival (March 3rd), traditional folk dancing and music playing, a New Year’s Eve parade with Shoki (the demon queller), the lantern festival (January 15th), and mochi tsuki (rice cake-making ceremony).

The artist signed at the lower right corner: 八十二翁歌川珖舟作 (painted by Utagawa Kōshū at eighty-two). Biographical information of Utagawa Kōshū is scarce. Kōshū was mainly known as an ukiyo-e artist active from the 1880’s to the 1920’s. Here, Kōshū demonstrated his strong ukiyo-e training in the skillful combination of striking designs with brilliant colors. Very few of Kōshū’s works survive today, and most of them are prints. Thus, Spring Festivals is a rare and important masterpiece of his late years.