by Anne Buening, Curatorial Assistant for European and American Paintings, Sculpture and Drawings 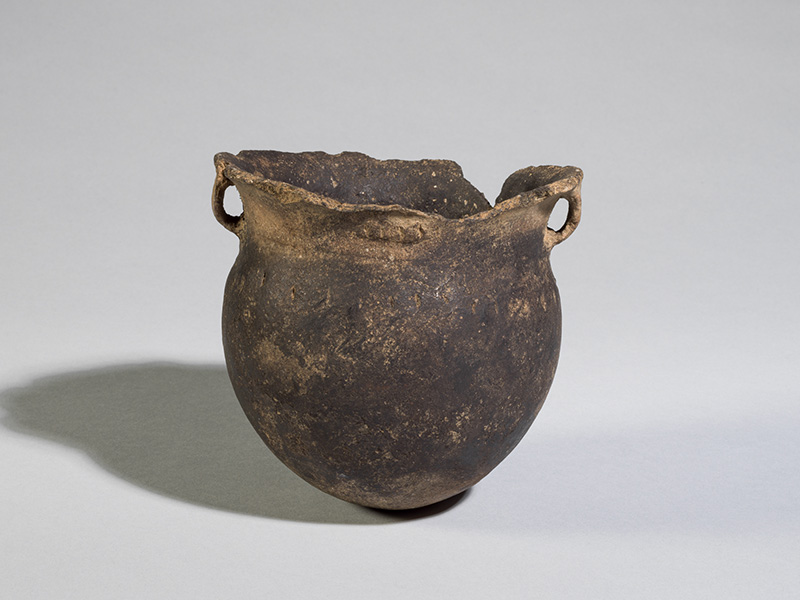 “Jos. Cox, Esq. through Womens [sic] Art Museum Ass., Pot or Bowl black—two handles. Mound Builders Madisonville.” These seemingly inauspicious words written on March 15, 1881, mark the addition of the first piece to the collection of the Cincinnati Art Museum. 141 years later, the museum is now the home to over 60, 000 works of art from around the world that span 6,000 years of history. With its simple decoration, it is easy to overlook the pot or jar and nothing in the records indicate that it has ever truly been the subject of study. This piece represents a fascinating mix of histories: local indigenous culture before white settlement, nineteenth-century American archaeology, the donor Judge Joseph Cox, and the Cincinnati Art Museum’s early years.

Who were the Fort Ancient people? What they called themselves will never be known—by the time European traders and explorers first came into Ohio, these people had either died out or left the area. The name Fort Ancient comes from a complex of hilltop earthworks built by the Hopewell (100–500 CE) located southeast of Lebanon, Ohio, that early white farmers assumed was a defensive fort. Evidence of habitation within the earthworks was presumed to have been left by the people who constructed the site. By the time archaeologists realized the Fort Ancient people were unrelated to the Hopewell and had moved into the earthworks centuries after they were built, the name had stuck.

The Fort Ancient tradition began in the eleventh century and eventually spread throughout central and southern Ohio as well as parts of Indiana, Kentucky, and West Virginia before disappearing between 1650–1750. While the Fort Ancient people did build burial mounds, after the Middle Fort Ancient period (about 1200–1400/1450) this practice had ceased.

The Fort Ancient people were farmers who mainly grew corn but also cultivated beans, squash, sunflowers, and tobacco. Their diet was supplemented by hunting and wild fruits and nuts. Based on the organization of their settlements and burials, the Fort Ancient society did not have set social ranking. Artifacts indicate that by the Late Fort Ancient period (beginning roughly about 1400), trade had been established with other indigenous cultures as far away as Missouri.

The jar was most likely discovered in the April 1879–June 1880 excavations at the Ferris and Stites families’ property located in Madisonville, which is now the village of Mariemont. At the time, so many pieces of broken pottery were found in the topsoil that the area was called the “Pottery Field.” A group of amateur archaeologists organized as the Madisonville Literary and Scientific Society became interested in the site. They hired Charles Low to excavate a portion of the area. Low found burials and storage pits that contained such a great number of artifacts that the Madisonville site became the representational site for both a period of the Fort Ancient tradition and a style of pottery.

The jar itself is small—it stands at just over 5 inches tall—and was likely used by an individual for cooking or serving food. The decoration is kept deliberately simple. A line of vertical marks was incised into the jar’s shoulder beneath the handles located under the outwardly curving rim. The body of the jar was carefully smoothed to create a neat silhouette. This type of minimally decorated pottery is called Madisonville plain ware. The clay used to make the jar was mixed with crushed shells to reduce cracking when it dried. Madisonville plain ware vessels made of shell-tempered clay date to the late Fort Ancient period designated as the Madisonville Horizon.

Joseph Cox (1822–1900) was born in Chambersburg, Pennsylvania. While he was a child, his family moved to Cincinnati. Cox began his training as a lawyer in 1840 during a contentious period in the city’s history as the local abolitionist movement grew. He witnessed a pro-slavery riot in 1841, which may have influenced him to become an abolitionist. He was elected Prosecuting Attorney for Hamilton County in 1854. President William Henry Harrison, who had worked as a lawyer in Cincinnati before entering politics, recalled that Cox provided legal help for the Underground Railroad and runaways brought to trial. During the infamous Margaret Garner trial (for more information, see https://ohiohistorycentral.org/w/Margaret_Garner) Cox sent reports to keep Ohio Governor Salmon P. Chase appraised of the situation. As a lawyer Cox was also notable for tackling corruption cases. In 1866 he was elected a Judge for the Court of Common Pleas and then later served as a Circuit Court Judge until his retirement in 1899.

Cox had a reputation as a powerful speaker and many of his speeches were published. He covered a variety of topics including a history of the state of Ohio, a biography of William Henry Harrison, and the battle of Gettysburg. He also published a Supreme Court history and a book on legal ethics. Though his interests were varied, his passion seems to have been archaeology.

In the nineteenth century American archaeology became a popular field. Westward expansion brought settlers in contact with the numerous mounds and earthworks created by indigenous peoples. As the land was cultivated, nearly all of these features were leveled to make way for fields, roads, and cities, which created a sense of urgency to record everything before it was destroyed. The Centennial in 1876 also contributed to the field’s popularity. As the country considered its first hundred years, a national history was created that was awed by the evidence of great indigenous cultures yet saw their demise as a part of the natural order in which European-based civilization ruled.

Cox was a man of his times, and his ideals of archaeology were in tune with his fellow contemporaries. Under the leadership of the physician Charles L. Metz, Cox and other amateur archaeologists formed the Madisonville Literary and Scientific Society (MLSS). They spent their weekends exploring local sites, sometimes leaving as early as 3:00 am to give themselves more time in the field. The MLSS hired Charles Low to excavate on a bluff in Madisonville from April 1879 to August 1881. The group published reports of these excavations that were objective and scientific for the time. However, reading these reports today can be a frustrating affair thanks to a lack of accurate field notes, excavation maps showing exact locations, and records of the artifacts. Objects and human remains were listed as total numbers found in a day’s worth of digging.

The members of the MLSS focused on the artifacts that were unearthed. These objects were divided like spoils into the men’s homes. Cox and the MLSS were intent on developing collections that served to recreate the Fort Ancient tradition’s culture. Their intention was to gather a large group of each type of artifact—for example, pottery vessels, stone tools, and arrow heads—so that commonalities could be found that would help classify different periods within the Fort Ancient tradition.

Cox saw his collection as one that could be used to educate others about past local indigenous history. He began donating objects before the Cincinnati Art Museum was built in Eden Park. Between 1881 and 1888 Cox donated nearly 400 artifacts to the museum’s collection. In a letter to Director Alfred Goshorn, Cox expressed his desire for these gifts, “I hope they may form a nucleus for a very large local collection which can easily be made in the neighborhood.” 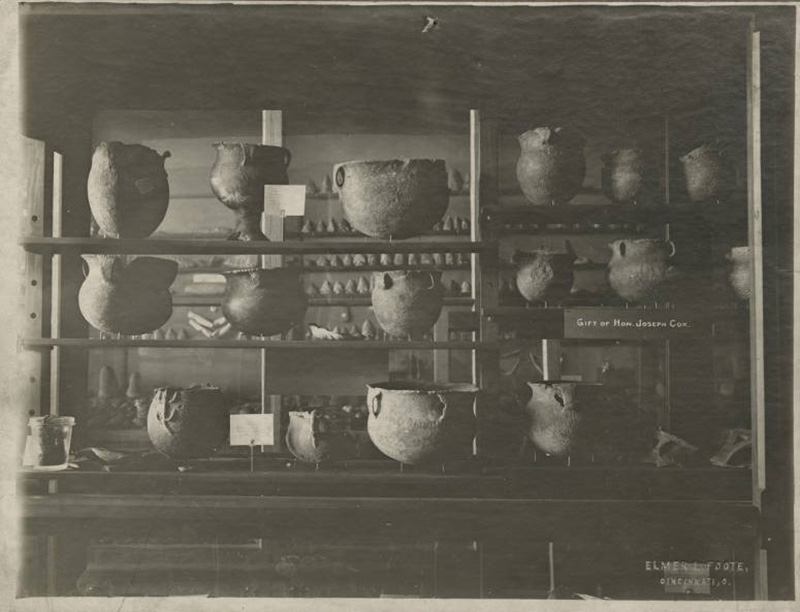 The Beginning of the Cincinnati Art Museum

Flush from their successful display for the Cincinnati Room located in the Women’s Pavilion at the 1876 Centennial Exposition held in Philadelphia, the women of the Women’s Centennial Executive Committee of Cincinnati decided that they should turn their attention to creating an art museum in Cincinnati. Thus, the Women’s Art Museum Association of Cincinnati (WAMA) was founded on April 28, 1877. For the next few years the WAMA organized loan exhibitions, free public lectures, and art classes in various places around the city until they rented rooms in the new Exposition Building connected to Music Hall (today’s south wing of Music Hall, for information on the building’s history see https://friendsofmusichall.org/cincinnati-music-hall-history/) in November 1879. Now that they had permanent exhibition space, the WAMA began to collect art. When Charles West donated $150,000 for the founding of the art museum, with the caveat that the community had to match the amount, the Cincinnati Museum Association was incorporated on February 15, 1881. The WAMA transferred their collection to the museum in March. The Cincinnati Museum Association (in the early years, the names Cincinnati Museum Association and Cincinnati Art Museum were interchangeable) continued to hold exhibitions in the Exposition Building until the Cincinnati Art Museum opened its doors in Eden Park on May 17, 1886.

Included in the new museum was a gallery dedicated to local indigenous culture. The display was organized similarly to the private collections of the MLSS. Large numbers of each type of object were arranged together to create an overall timeline for the entire Fort Ancient tradition. Photographs of these cases can be overwhelming today. So many artifacts are crammed into the cases that it is hard to focus on a single item. It was during the twentieth century that we began to view each object as a piece worthy unto itself and by the second half of the century, many of the pottery vessels were reclassified as works of art. Today, museum theory seeks to both see these artifacts as art and reinsert them into their historical contexts as much as possible. 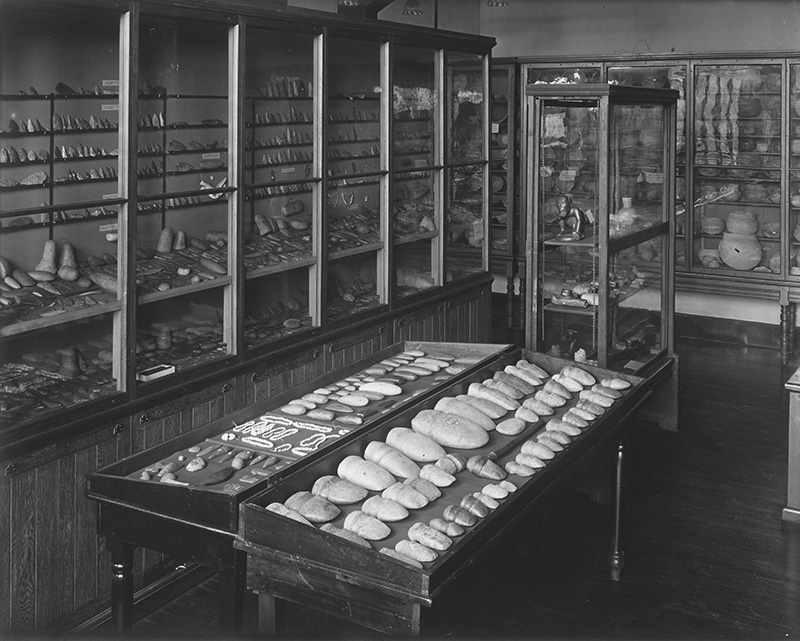 Because of the lax field notes kept by the MLSS and Low, we do not know if this jar was a grave good buried with ceremonial intent or simply a vessel left in a storage pit. The jar has been regrettably separated from its original context. However, it has gained new meanings when viewed in relation to its place as part of the collections of Judge Cox and the Cincinnati Art Museum. This jar stands as a representation of the intentions of the men who unearthed it, the curators of the museum’s early collection, and of today’s scholars. How will this jar be viewed in the future?