In the late nineteenth century, public art museums were still very much a new phenomenon, especially as far west as Cincinnati. However, during the 1800s the city had become one of the most important centers of art and design in the Midwest, and the establishment of an art museum seemed to be the next logical step for many. This included the members of the Women’s Art Museum Association, which was established in 1877 to promote the benefits such an institution would provide for the community. Thanks in large part to their tireless efforts, support for an art museum grew steadily and, in 1881, a public subscription attracted enough contributions to secure the project’s future.

With financing in place, the Cincinnati Museum Association was incorporated on February 15, 1881, to construct and run the new art museum. The association’s first decision was where to build it. Having considered both Washington Park and Burnet Woods, they finally settled on Eden Park, conveniently located near downtown Cincinnati, but high enough to escape the worst of its industrial pollution. One of Cincinnati’s leading architects, James W. McLaughlin, was engaged to design and supervise construction of the museum.

On May 17, 1886, the first purpose-built art museum west of the Allegheny Mountains opened its doors, with almost 5,000 people visiting. In one of the many speeches given that day, Mayor Amor Smith, Jr., described the art museum as, “a gift of the people for the people,” acknowledging the crucial role the community had played in its establishment. Over the next nine months, 26,403 people would visit the new museum, which was open daily, Monday through Saturday, with an admission fee of 25 cents for adults and 15 cents for children. In July, it also began opening on Sundays, “for the benefit of the many hard workers who are unable to leave their occupations during the week”.

In November 1887, the Art Academy of Cincinnati moved into a new building—also designed by James W. McLaughlin—alongside the museum in Eden Park. Founded as the McMicken School of Design in 1869, the school was absorbed into the fledgling University of Cincinnati in 1871. However, control was transferred to the Cincinnati Museum Association in 1884, beginning a 114-year relationship between the two institutions.

In May 1907, the Emma Louise Schmidlapp Memorial Building opened. This was the first addition to the original museum building, designed by noted Chicago architect Daniel Burnham in the Doric style. Consisting of an exhibition hall linked to the main building by a corridor gallery, the new wing was endowed by financier and philanthropist Jacob G. Schmidlapp in memory of his daughter who, along with his wife, had died in a train crash in February 1900.

In 1910, bequests from sisters Mary and Eliza Ropes enabled the museum to add a further extension to the original building. Designed by Cincinnati architects Garber and Woodward, the Ropes Wing provided gallery space for contemporary American painting on the second floor, while fashion and textiles were exhibited on the first floor, where the Terrace Café is located today.

In February 1907, an endowment from local philanthropist and art collector Mary M. Emery enabled the museum to offer free admission every Saturday. This led to a huge jump in attendance, especially among children. As a result, the museum began to offer a range of activities aimed at its younger visitors. The most popular of these were the free Saturday morning art classes introduced in 1921. Open to anyone aged 7–14, regardless of ability, hundreds of children would line up each week to take part. Over the next 60 years, the classes inspired a love and appreciation of art in generations of children, one of whom was renowned wildlife painter John Ruthven.

Thanks to the generosity of donors Mary M. Emery, Mary Hanna, and Herbert Greer French, three new wings were constructed in the late 1920s and opened with much fanfare in January 1930. Designed by Garber and Woodward, the Emery, Hanna, and French Wings provided much-needed gallery space, and also created the enclosed courtyard at the heart of the museum, which remains a focal point today.

The last major addition to the museum for 30 years was the Alms Wing, which opened in October 1937. It was designed by local architects Rendigs, Panzer, and Martin and was endowed by a bequest from Eleanora C. U. Alms, widow of Frederick H. Alms, one of the founders of the Alms and Doepke Dry Goods Company. The wing included the museum’s first auditorium and a new home for its library, as well as gallery and office space.

The war years proved a challenging time for the museum. Faced with rising costs and fewer visitors, expenses had to be drastically reduced. The entire second floor was mothballed in July 1942, remaining closed until October 1946. Nevertheless, the rest of the museum stayed open and active, doing what it could to support the troops and maintain civilian morale. There were exhibitions with patriotic themes, and special classes to help the public cope with wartime shortages. But by simply staying open the museum made its most important contribution, with one member writing: “The art museum offers something that is beyond price. May its light continue to shine in a darkening world.”

The late 1940s and early 1950s saw significant changes to the building. The Schmidlapp Wing’s Doric facade became the main entrance to the museum (as it remains today), while the Great Hall—the original entrance hall—was divided into two floors and its grand staircase demolished.

The first docent-led tours of the museum began in April 1961. At that time, tours were only available to school groups, and docents had to be members of the Junior League of Cincinnati. By the mid-1970s, however, all visitors could join a tour and anyone with the requisite enthusiasm and commitment could apply to join the docent program. Today, around 20,000 visitors each year take docent-led tours of the museum.

The Adams-Emery Wing opened in October 1965, named in honor of the museum’s director, Philip Adams, and John “Jack” Emery, president of the Board of Trustees. It was designed in the International Style by Cincinnati architects Potter, Tyler, Martin & Roth, and covered the entire south façade of the original museum building. The first floor was a showcase for the decorative arts, fashion and textiles, while galleries for paintings and works on paper occupied the second floor. In the basement was a new lecture hall and restaurant, along with accommodation for the Cincinnati Historical Society, which had contributed towards the cost of the building.

The museum’s gift shop, which opened in March 1969, was set up by a group of dedicated volunteers: Carol Haile, Ann Casey, Nancy Coith, and Mary Gores. Originally located in the main entrance hall where the cloakroom is today, the shop moved to its current location in 1975.

The Cincinnati Museum Association celebrated its centennial in 1981 with a special exhibition, Art Palace of the West, which chronicled the museum’s history. “Art Palace of the West” was a nickname supposedly given to the museum back when it opened in 1886. However, the earliest confirmed use can only be traced to 1971 when it was employed as the title of a television documentary about the museum hosted by then director Philip Adams.

An extensive two-year, $13 million project to restore the grandeur of the museum’s interior was completed in January 1993, during which almost all the public spaces were refreshed or remodeled. This included the restoration of the Great Hall, which reversed the unsympathetic modernization of the 1950s and returned the space much to way it looked back in 1886. Original features such as the polished granite columns and ornately carved capitals that line the second-floor balcony were revealed, and a brand-new staircase was constructed.

In May 2003, the first floor of the Adams-Emery Wing was transformed into 15 new galleries dedicated to Cincinnati’s important role in the history of American art. Known as the Cincinnati Wing, this was the first permanent display dedicated to a city’s art history in the country. The opening of the Cincinnati Wing coincided with the elimination of the museum’s general admission fee, made possible by a generous gift from the Lois and Richard Rosenthal Foundation.

Alice Bimel was a devoted museum volunteer for more than 40 years. She was a member of the first docent class in 1960, the first woman named to the Board of Trustees in 1972, and the first president of the Women’s Committee in 1973. She and her husband Carl also donated many works of art to the museum and provided generous financial support. In 2004, the museum’s central courtyard was named in her honor.

In 2005, the Art Academy left its home of almost 120 years next door to the museum and moved to a new campus on Jackson Street in Over-the-Rhine. The vacant building underwent an ambitious renovation project, conceived and overseen by Cincinnati firm Emersion DESIGN, which was completed in 2013. The new wing was named in honor of Joseph Longworth, a significant figure in the history of both the art museum and academy. On the first two floors are administrative offices, while the Mary R. Schiff Library and Archives occupies the third floor.

The Rosenthal Education Center opened in March 2015. The REC offers a lively, interactive space where families can learn about the museum’s collection and special exhibitions in a fun, hands-on manner. Alongside the REC there were new galleries for antiquities and African art, incorporating state-of-the-art technology to allow visitors to explore the collection in innovative new ways.

The Schmidlapp Wing’s gallery space underwent a radical transformation in 2017. Floor-to-ceiling windows were installed along its length, allowing light to flood into the space and providing a visual connection with the Alice Bimel Courtyard. The refurbished gallery was designed to be modern and welcoming, with new seating and viewing areas encouraging visitors to linger and learn.

As part of its ongoing efforts to be more inclusive and accessible for people of all abilities, backgrounds, and life stages, the museum’s main entrance was modernized during 2019. Improvements including the addition of a ramp to provide equal physical access for all visitors at the front entrance for the first time.

During 2019, No Spectators: The Art of Burning Man became the most highly attended exhibition since 1982’s Treasures from the Tower of London. This helped to make the 2018/19 fiscal year a record-breaker in terms of overall attendance, with over 346,000 visitors, the largest number in the museum’s history.

On March 13, 2020, the museum was forced to temporarily close its doors by the COVID-19 pandemic. Although the building itself was shut for the next 14 weeks, the museum continued to bring art to the community through new online programming. A venue for safe, open-air activity was also provided by the opening of Art Climb in May 2020. This grand staircase leading up to the museum from Gilbert Avenue was the first element in a plan to open the museum’s grounds and build closer links with surrounding neighborhoods.

At the end of 2022, the museum will announce the achievement of an ambitious $65 million fundraising goal. The success of this effort was made possible by donations from many generous individuals, corporations, and foundations who took part in A New View—a comprehensive fundraising campaign—in support of the museum’s 2016 strategic plan. The vision of the strategic plan began to unfold with the creation of the Art Climb and other transformative projects with the goals of increasing public accessibility to the museum, expanding its audience, enhancing the visitor experience and growing the museum’s organizational capacity. In addition to these projects, the campaign also funded the Wyler Family Entrance linking Eden Park Drive to the museum’s grand front entryway. 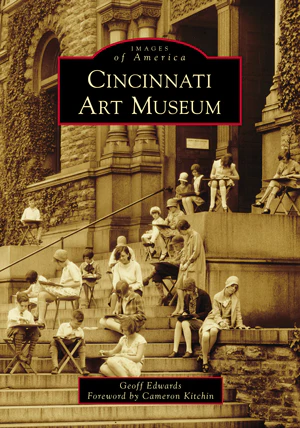 Learn more in the book Cincinnati Art Museum, part of Arcadia’s “Images of America” series. Illustrated with photographs and documents from the museum archives, it allows readers to dig deeper into Cincinnati Art Museum’s long history. Geoff Edwards, the institution’s archivist, explores the origins and growth of the museum and its collection and highlights some of the notable exhibitions, people, and events since the museum’s opening.