Thinking Ahead in Curatorial

When chatting with museum members, donors and patrons, curators are often asked, “What’s your next project?” While we often have an exhibition just around the corner, curators are generally working on multiple projects at once. For instance, my schedule is particularly hectic this fall due to a show that does not open in Cincinnati until the summer of 2019.

Partnering with Kyoto Costume Institute, this upcoming exhibition examines the influence of traditional Japanese dress—the kimono—on western fashion from the 1880s to the present. Because the show opens at the Newark Art Museum in October of 2018, publication deadlines fall in December of this year. Research must be done, essays written and photography completed for the catalog.

The Cincinnati Art Museum will add a number of pieces from the permanent collection to this exhibition, including two dressing gowns or robes from around 1900 donated in 2012. These garments are of particular interest because they were made in Japan specifically for western consumers. Fashionable in the early twentieth century, they were illustrated and advertised in popular magazines such as Vogue and Ladies Home Journal. 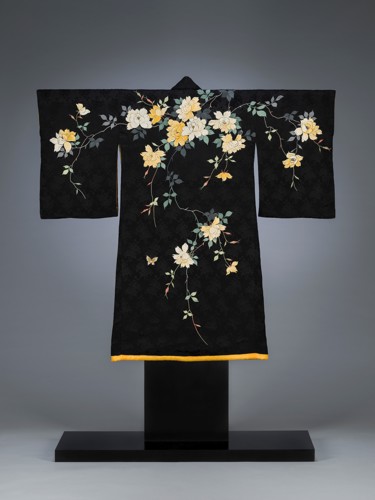 Of the two dressing gowns donated to the collection, this black piece piques my interest the most as it embodies the interchange of western and Japanese cultures in several ways. Most prominent are the yellow roses hand embroidered in a traditional Japanese manner that are commonly found in the western garden but never in the Far East. Their boldness is matched only by the garment’s bright yellow lining and rolled hem. With its furisode-style sleeves and angular cut, this dressing gown appears to be constructed just like a kimono. However, a triangular piece of fabric called a gore is set into the side seams at the hem, affording the western woman a fuller skirt and therefore greater ease in walking than her Japanese counterpart. Taking the place of the traditional wide and rather constrictive obi, these dressing gowns were accessorized with a softer and narrower fringed sash. 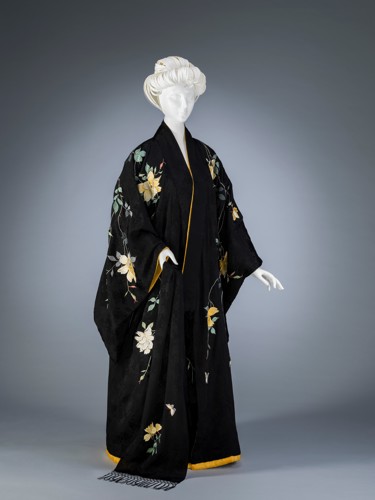 This garment is a fascinating example of cross-cultural exchange—a phenomenon not uncommon in the art world of the past as well as today. Watch for this dressing gown to appear on view in our 2019 exhibition. Title to be determined!