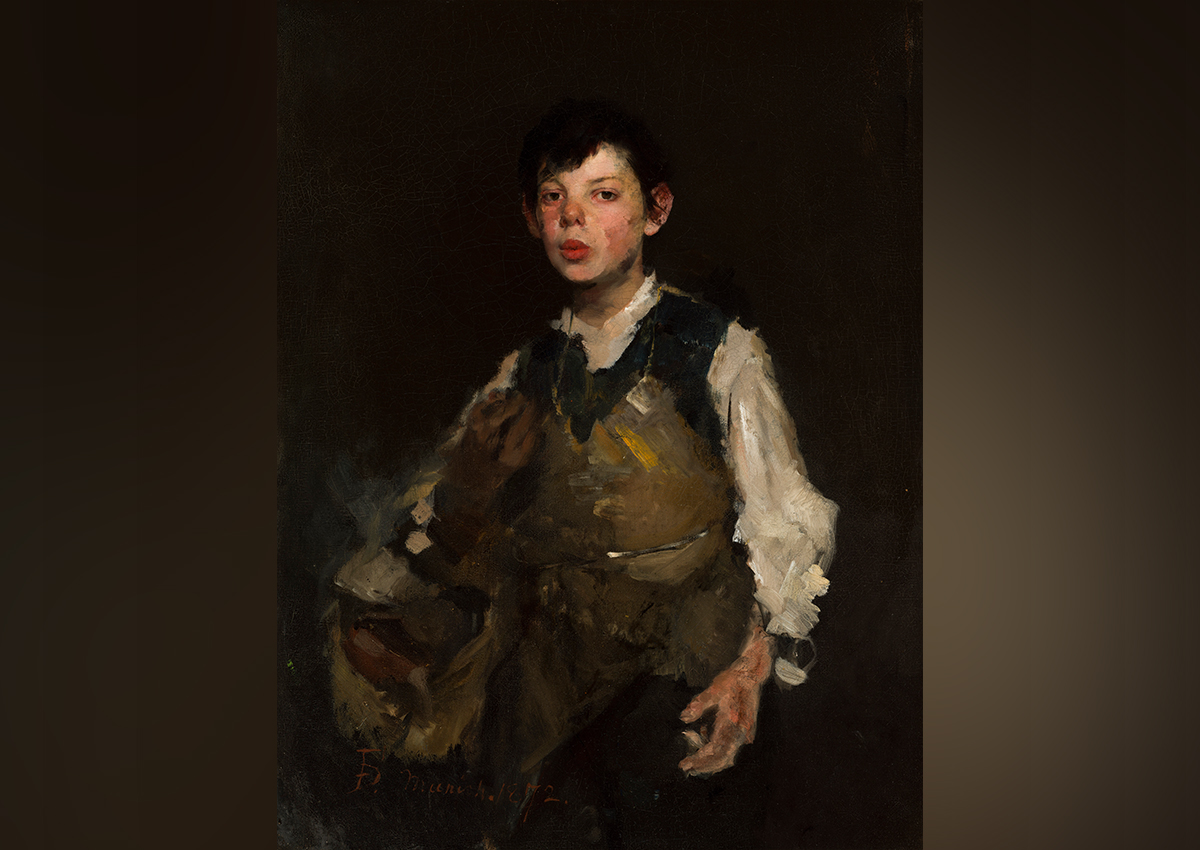 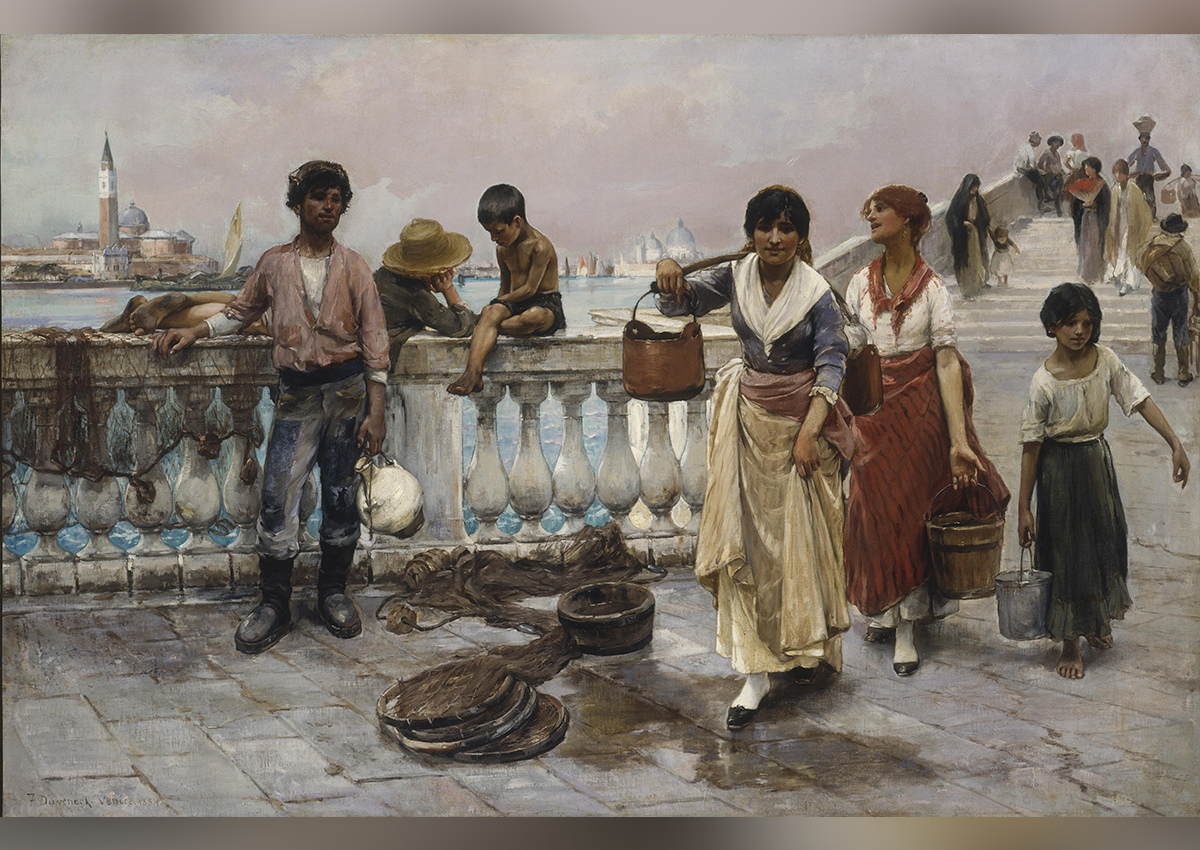 The Cincinnati Art Museum presents a major re-evaluation of the work of Frank Duveneck, the most influential painter in Cincinnati history, with the first comprehensive exhibition in more than thirty years.

Through his brilliant and inspiring work as a painter and printmaker and as a charismatic teacher, Duveneck’s impact on the international art world of his time was substantial and enduring. More than ninety examples across media from the holdings of the museum, the leading repository of the Covington native’s work, and thirty-five pieces on loan from collections across the United States will provide a fresh, in-depth look at this important artist.

Already saw the exhibition? Tell us what you think!

Once Cincinnati’s most celebrated artist, Duveneck was born in Covington to Westphalian immigrants in 1848. He studied in Munich, Germany, where he became an influential teacher, and spent nearly two decades in Europe. His work reflected the impact not only of modern German art, as is widely acknowledged, but also French and Italian work. His paintings’ lack of finish and assertive brushwork parallel Impressionism, and his work as a printmaker positioned him centrally in the period’s etching revival.

A captivating educator of men and women, Duveneck counted John Henry Twachtman and Elizabeth Boott among his pupils and James Abbott McNeill Whistler among his collegial friends. Returning to the United States in 1888, Duveneck taught at the Art Academy of Cincinnati, where he became director of the faculty in 1905. As a mentor and esteemed advisor to collectors and the Cincinnati Art Museum staff, Duveneck’s impact on the Cincinnati art world remains unparalleled.

Despite the variety of his styles, techniques, and media (Duveneck painted in an exceedingly loose but later also a more contained manner, while working in sculpture and printmaking as well), it is usually his earlier, more open, fluid, and flowing paint application for which he is best known today. Often associated with the school of Munich-American realism but sometimes called impressionistic as well, Duveneck’s way of painting, alongside of William Merritt Chase, J. Frank Currier, and others, including John Singer Sargent himself, is frequently named as the driving force behind the more bravura-oriented styles of depiction that became dominant in many sectors of the modern American art scene after the mid-1870s. Critics often placed his among the first generation of so-called American painters’ painters.

Duveneck’s impact is alive today in many corners of the collection of the Cincinnati Art Museum. He not only donated his own work, and pieces he owned by colleagues, but also participated actively in shaping the collection. The artist partnered with Joseph Henry Gest, the museum’s assistant director (and its second director from 1902), to form a notable collection of contemporary American art, principally American Impressionism. He advised on purchases, negotiated prices, and used his influence and friendships to act as an intermediary between the museum and East Coast painters. He also alerted Gest to those artists he felt deserved an exhibition or acquisition. On Old Master paintings, his opinion was the final word. “Mr. Duveneck does not see anything in this worth the museum considering,” reads a note attached to a dealer’s offer. Private collections like Mary M. Emery, whose superb holdings were destined for the museum, also relied upon the artist’s expert advice. It would be a daunting task to count the works of his students represented in the collection.

When Duveneck passed away in 1919, he was the most beloved and respected artist in Cincinnati and an acknowledged father of American art. In 1928, Norbert Heermann, a former pupil, published an encomium that opens with the endlessly repeated bit of hyperbole, quoted from a casual remark John Singer Sargent made at a London dinner party: “After all’s said, Frank Duveneck is the greatest talent of the brush of this generation.” More meaningful, perhaps, is a later quote from an interview with Robert Henri, the leader of a subsequent generation of painters committed to capturing the vitality of daily life. Upon seeing the display at the Cincinnati Art Museum, Henri reportedly told Mary L. Alexander of the Enquirer:

Duveneck is a great master; no student of painting if he were awake could go through that gallery and not be inspired by the great order of expression…and also not be inspired to develop for himself a technique of corresponding dignity. He is an extremely sensitive painter, a great draughtsman and every stroke of his brush manifests a consciousness of life, an intense conception of nature.

This is the first exhibition in 30 years to dive deep into Duveneck’s artistic development, his working methods, and the historical and social context of his subjects. Presenting abundant new research, the exhibition upends many common misconceptions and reveals the artist’s accomplishments across subjects and media, including oil paintings, drawings, watercolors, pastels, etchings, monotypes and sculpture.

Dr. Julie Aronson has served as Curator of American Paintings, Sculpture and Drawings at the Cincinnati Art Museum since 1999. Dr. Aronson earned her B.A. in art history from Brandeis University, M.A. from Williams College, and Ph.D. from the University of Delaware. She is the recognized authority on the sculpture of Bessie Potter Vonnoh, the subject of her doctoral dissertation and her touring exhibition and catalogue Bessie Potter Vonnoh: Sculptor of Women (2008). Dr. Aronson’s professional experience includes a position as the assistant curator of American art the Nelson-Atkins Museum of Art in Kansas City, Missouri, and research posts at the National Gallery of Art and the Smithsonian American Art museum. She has published and lectured on topics ranging from New England folk portraiture to painters and sculptors of the Cincinnati region. Her research on the Cincinnati Impressionist Edward Henry Potthast culminated with the exhibition and publication Eternal Summer: The Art of Edward Henry Potthast (2013). Dr. Aronson has contributed essays to American Naïve Paintings from the National Gallery of Art, The Oxford Dictionary of American Art and other compendia. At the Cincinnati Art Museum, she collaborated with Marjorie E. Wieseman to curate the exhibition Perfect Likeness: European and American Portrait Miniatures from the Cincinnati Art Museum (2006) with its landmark catalogue. Dr. Aronson was on the curatorial team that produced the permanent collection display The Cincinnati Wing: The Story of Art in the Queen City, and edited and co-authored the companion publication.

Elsewhere in the museum, Duveneck will be celebrated with a free display, Grand Experiment in Italy: Etchings by Duveneck and His Students on view through April 4, 2021 (G213). Curated by Cincinnati Art Museum’s Curator of Kristin Spangenberg, the special feature showcases 18 rare etching by Duveneck and his students, including a trial proof of The Riva, a previously unrecorded early etching by the artist in 1880.

In addition, Duveneck’s art in the Cincinnati Wing has been freshly installed with More Duveneck! Paintings from the Vault, which presents 35 paintings by the artist from the museum’s renowned collection, hung salon-style in the Otto M. Budig Family Foundation Gallery (G110).

Try one or more of our MyCAM Art Hunts! Each MyCAM Art Hunt booklet is filled with creative prompts for looking at and responding to artworks in the galleries (or in your living room).

For adults and older children, we encourage you to try the MyCAM Adult Art Hunt: Frank Duveneck: American Master. For families and younger children, explore the exhibition with the MyCAM Family Art Hunt: Meet Frank! Share Your MyCAM adventure with your family, friends and us! Tag your photos with #MyCAMArtHunt

Are you interested in using MyCAM on your device, at home or in your classroom? Please download these screen-friendly versions (link coming soon).

MyCAM is based on JourneyMaker, the interactive family experience designed and developed by the Art Institute of Chicago. The museum worked with Paperplane Creative and Clifton Labs to bring JourneyMaker to Cincinnati. MyCAM is generously supported by The Ward E. Bullock Endowment for Interactive Education.

Seeing the bold, confident handling in which Frank Duveneck infuses life into his subjects can be breathtaking. This is the first major publication in more than thirty years devoted to Duveneck. Beloved to his students, Duveneck was lauded by many Gilded Age luminaries such as James Abbott McNeill Whistler and Henry James. Yet a century after his death, he is largely known only for a single brilliant painting, The Whistling Boy. By contextualizing his work in the artistic, cultural and social milieus of the time, this publication offers diverse perspectives on Duveneck’s life, work, subjects and reputation.

My Interpretation Monday: Portrait of a Woman by Paul Loehle, Guest writer I Feb. 9, 2015

The Cincinnati Art Museum is partnering with Listermann Brewing Company to celebrate Frank Duveneck: American Master with a new beer named after the exhibition.

The new stout beer brewed with dark rock candy sugar and milk sugar is the perfect festive treat for those eager to stay cozy all winter long while paying tribute to the influential painter.

The limited-edition release will include four different bottles that will allow those who purchase to create their own mini Duveneck gallery at home. The four labels feature famous artworks by Duveneck including his iconic The Whistling Boy, a self-portrait, Water Carriers, Venice, and Woman with Black Hat.

The beer will be sold at Listermann Brewing taproom starting Dec. 22.

This exhibition was organized with the generous support of the Harold C. Schott Foundation.

With additional support from:

The Duveneck Association of the Cincinnati Art Museum, Mike and Sue West, and the Wohlgemuth Herschede Foundation