A Sneak Peek: Art and Feminisim

In November 2014, the Art Museum launched a new bi-monthly lecture series entitled Art and…  This series was built on the idea that we each bring our own unique perspectives to an experience with a work of art.  For example, I, as a museum educator, would look at a painting in a very different way than my dad, who is a CPA.   Although our observations and interpretations of an artwork may differ, engaging in conversation allows us to share our ideas and consider things we might have previously overlooked. 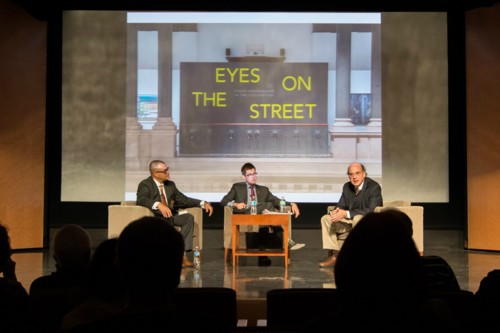 Each Art and… talk follows the same format: we invite two experts from distinct fields to prepare a 20 minute presentation on the same topic.  Our very first Art and… focused on the theme of privacy, and our invited speakers were Chief Jeffrey Blackwell of the Cincinnati Police Department and Alphonse Gerhardstein, a civil rights attorney.  Following each of their presentations on privacy as it relates to their line of work, Chief Blackwell and Mr. Gerhardstein sat down with CAM’s curator of photography, Brian Sholis, for a conversation about how this same theme applied to photographs in the Eyes on the Street exhibition.

Our next Art and… talk, Art and Feminism, is scheduled for Wednesday, May 20th, at 7:00 p.m. in the Fath Auditorium.  Our speakers will be Dr. Madelyn Detloff, Associate Professor of Women’s, Gender, and Sexuality Studies at Miami University, and Susan Neill, an independent costume and textile historian based in Chicago.  They’ll address big ideas related to feminism, but will also explore how Rudi Gernreich’s idea of “The Total Look” conveys the standards of feminine beauty in the 1960s and 1970s.  They will be joined in conversation by CAM’s own Cynthia Amnéus.

Last week, I asked Susan and Madelyn to answer a few questions as a teaser for Wednesday’s program.  Here are their responses.

How do you personally define feminism?
Susan Neill: Feminism, to me, simply means equality—that women should have the same rights men have.
Madelyn Detloff: Whenever someone asks me to define feminism I fall back on the popular slogan “Feminism is the radical notion that women are human beings.” (This is often attributed to Cheris Kramerae, but I have heard it attributed to others as well.)  What does it mean to be fully human?  That is a question that philosophers, spiritual people, political thinkers, and everyday people have been grappling with for millennia.  For me, it means that everyone should be regarded with dignity, compassion, justice, and respect, regardless of their gender, race, sexuality, nation, intellectual, physical, or psychological atypicalities, body type, religion, language, or social class.  This is a simple concept but one that is apparently very difficult for people to put into practice.  Feminism is one of many movements that arcs towards social justice. 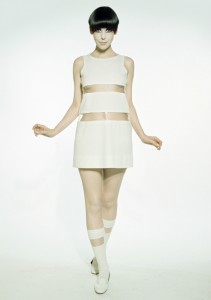 What role do you think fashion plays in relation to feminism?  For example, in what ways (if any) does Rudi Gernreich’s Dress with Vinyl Cutouts serve as an example of feminism?
SN: Fashion plays a vital role in feminism when it enables women to move beyond the constraints of traditionally gendered dress and behavior. The vinyl cutouts dress is a quintessential Gernreich design, in that it undermines societal constraints. It is body conscious yet, at the same time, abstracts the body. The woman who selects this dress necessarily rejects rigid underpinnings and liberates her body. She stands out as herself, as an individual, and—no longer visually classified as a member of the second sex—she can step confidently into the future.
MD: The relationship between fashion and feminism is complex. On the one hand, women have in many cultures been told that their bodies should be covered and constricted (through the means of girdles or corsets, for example), and Gernreich’s designs have challenged that idea that women should cover up their skin, while men, in the North American/Western European context have fewer restrictions on showing their flesh (by going shirtless at a ballgame for example).  On the other hand, women have also been portrayed in Western art as for the consumption of the male gaze.  John Berger’s Ways of Seeing (first published in 1972 when Gernreich was at the height of his career) notes this quite succinctly — “Men Act — Women Appear.” As an aesthetic practice that challenged double standards about women’s bodies, Gernreich’s designs provoke critical thinking about assumptions regarding female dress in North America and Western Europe. Those conversations are still with us — as controversy over the recent practice of “Slut Walks” has shown.

I hope that you’ll join us to hear more from Susan and Madelyn on Wednesday. This event is free for Art Museum members, $10 for general admission, $5 for students/seniors.Tickets are still available, and can be reserved online or by calling 513.721.ARTS.