Behind the Scenes in Conservation: 12th–13th Century Water Jar

This week in objects conservation: Anytime an object is selected for display our objects conservator assesses its condition to determine whether it is stable, or whether it needs conservation treatment before display. This 12th-13th C large round bottom ceramic vessel has been selected for display and is currently undergoing examination to determine its condition. Almost immediately it’s clear that this piece has been repaired at some point in the past. Structural cracks can be seen running throughout the piece both on the exterior and interior surfaces, indicating it was once broken into several fragments and reconstructed at some point in its past. There are also several areas of loss that have been filled and painted over in a past treatment. The repairs have discolored over time and extend over the areas of loss covering parts of the original undamaged surface. This type of repair is not consistent with modern conservation practices, so it is likely that it was carried out in the mid 1900’s. Fortunately, and most importantly, the adhesive holding the fragments together has aged well and is still in stable condition. Overall this object is in stable condition, though the older fills could be modified to be less distracting and to reveal more of the original object surface. Now the treatment options will be discussed with the curator and the object will move one step closer to display! 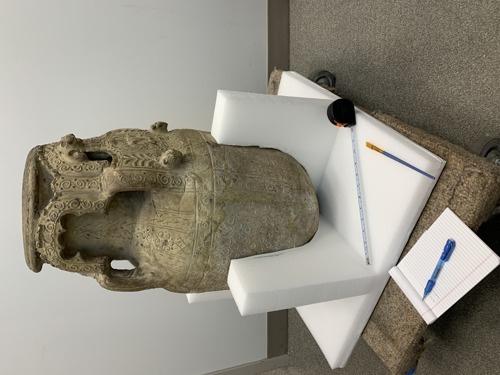 Closeup of the cracks and old fill material: