Behind the Scenes in Conservation: A Fresh Mount for Guan Yu

In the newly opened exhibition, Galloping Through Dynasties, visitors will see several of the museum’s hanging scrolls for the first time. One of these is a recent gift and is unlike any others in our collection. Most of our scrolls are paintings on silk or paper. Guan Yu on Horseback at first glance looks like a woodcut in black ink on paper. However, closer study reveals that it was made by rubbing the paper with ink over a stone carving. The early Ming dynasty tablet no longer exists; this rubbing allows us to continue to experience the work of art that is lost.

The rubbing came to the museum in a frame. Narrow silk borders, trimmed to fit in the frame, remained. The backing paper was discolored from having been framed against a wood pulp cardboard back board and from exposure to light. It was important to remove the acids from the paper and to restore the rubbing to a hanging scroll format. With support from the Dunlap Foundation, the rubbing was taken to the Robert B. Jacobs Asian Conservation Laboratory at the University of Michigan Museum of Art for treatment. Qian He, Asian Painting Conservator, removed the backing papers and washed the rubbing before lining it with new, high quality Chinese paper. Borders of cream colored silk surround the rubbing, creating a subtle “frame” for the dramatic image. Shown here is the rubbing hanging next to Fan Tingzhen’s Landscape with Figure, also conserved with support from the Dunlap Foundation.

Guan Yu on Horseback, before treatment: 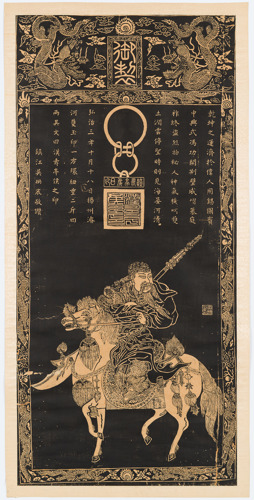 Guan Yu on Horseback after treatment in gallery: 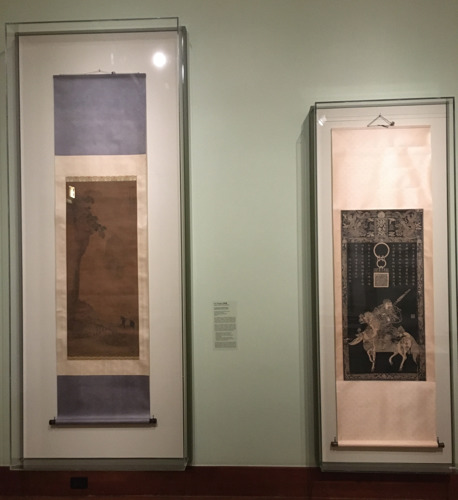