The Cincinnati Art Museum believes that art is for everyone. Our mission is to use the power of art to connect communities and contribute to a more vibrant Cincinnati, and we embrace the vibrant diversity represented in our Greater Cincinnati LGBTQ+ community. We strive to be a welcoming and open environment for all.

Enjoy these works by artists who identify as LGBTQ+ in the museum’s permanent collection.

Born in Fulton, Missouri, Nick Cave combines aspects of sculpture, fashion design, dance, and video art in his larger-than-life ‘Soundsuits.’ These fully body, form fitting ‘suits’ are layered and textured with metal, plastic, found objects, and colorfully dyed human hair designed to rattle, swish, and resonate in rhythm with the movements of the wearer, usually Cave himself. 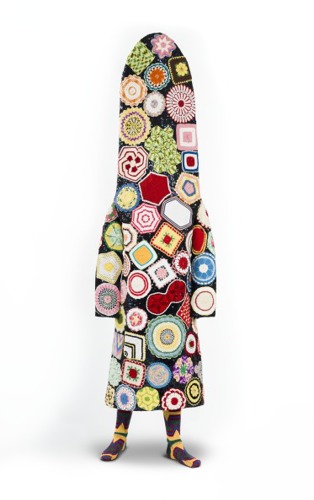 We usually think of a portrait as a visual likeness of the sitter specifically reflecting their physical appearance. The subject is often surrounded by telling attributes that reference their character, occupation, and social status. But this portrait is unusual. It tells us about an institution rather than an individual and the artist has chosen to paint the portrait with words and dates.

Commissioned by the Cincinnati Art Museum in 1994, this work conveys the character of the institution through a text-based string of significant events and their dates. The history of the museum, its affinity to the city of Cincinnati, and its connection to the cultural and political events of the nation can be understood through this listing that encircles the lobby near the ceiling. Purposefully organized in non-chronological order, this seemingly random chain of events also references the sporadic nature of frailty of memory. 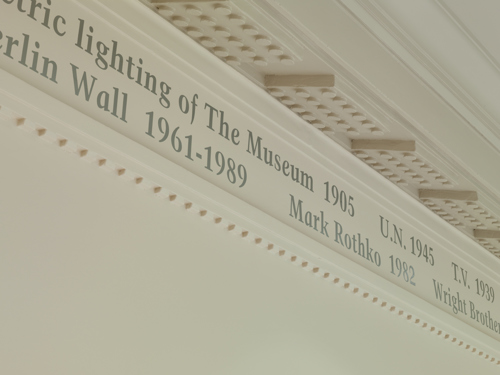 Ellsworth Kelly was one of America’s greatest living abstract painters. Beginning in the late 1970s, he reduced an already constrained painting style to simple expanses of pure color. His work in recent decades features shaped canvases joined at their edges or superimposed one atop the other. Color and shape are the essential building blocks of form, and Kelly used them to create optical effects of surprising variety.

Bright green and acidic orange are both secondary colors, and here they form a vibrant juxtaposition. The outer curve of the orange canvas implies continuation, as if we’re seeing one slice of a large circle. That’s not the only mental projection we make when viewing an abstract canvas like this one. While the satisfying composition stands on its own, images from the world nonetheless surface in our minds. We think of a boat’s sail, or children’s building blocks, or a fiery sunset partly obscured by a tall building. Kelly, too, found inspiration in the world around him; the power of his work is in part its distillation of the world’s visual relationships into forms like this one.

Listen to a museum volunteer discuss Kelly’s work in this CAM Look episode published on March 22, 2021. 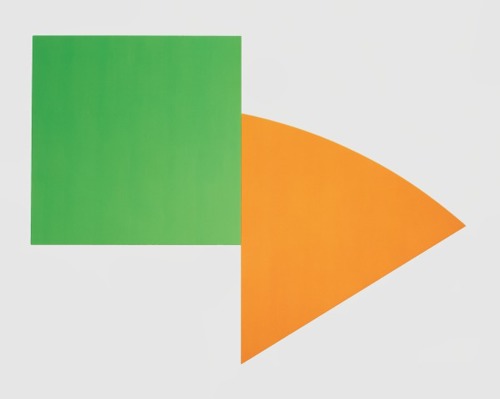 The artist, who began using gender-neutral pronouns in 2017, makes self-portraits for the Hail the Dark Lioness series during work travel, using found props and ad hoc settings. Borrowing from visual traditions of fashion photography, black and white portraiture, and ethnographic imagery, Muholi’s images are both celebrations and confrontations. Their pictures meet the eye with fierce beauty while broaching ways that photography has silenced, exoticized, sexualized, or otherwise stereotyped Black people who are socially positioned as women. 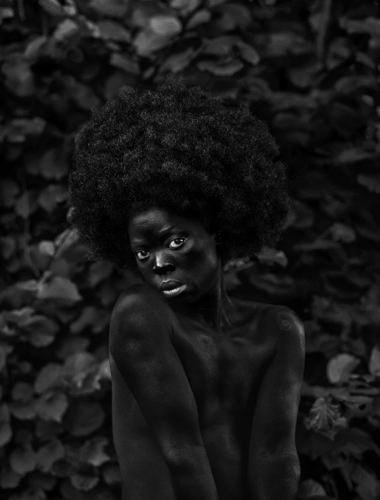 Andy Warhol’s Campbell’s Soup Cans have become icons of the Pop Art movement, which blurred the borders between fine art and the mass-produced commercial art intrinsic to modern life. Warhol was captivated by bold advertising graphics and the effects of repetition upon the viewer. In 1962, he exhibited his new Soup Can paintings lined up on shelves as in a grocery store. Yet, the evasive artist left their meaning open-ended: was he making a positive or negative comment on consumer culture? Were the paintings a jab at commercialism of the art world? Or did he simply paint the subject because, as he said, he liked soup?

Although Warhol later famously quipped “I want to be a machine,” the early Soup Can paintings show clear evidence of hand work. You may notice that the lines and letters waver slightly and vary in width. Warhol later preferred the screen printing process to painting by hand since it was close to mass production.

Listen to a detailed audio description of Warhol’s work in this CAM Access episode published on July 26, 2020. 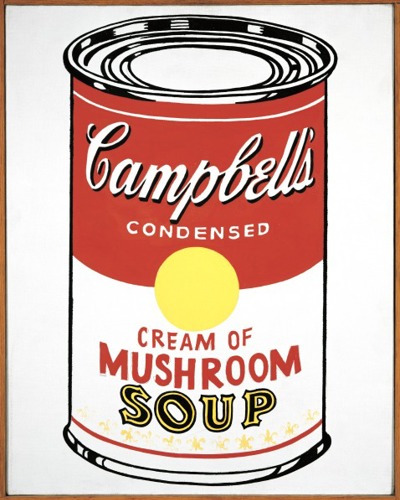