Behind the Scenes in Conservation: Some forensic findings 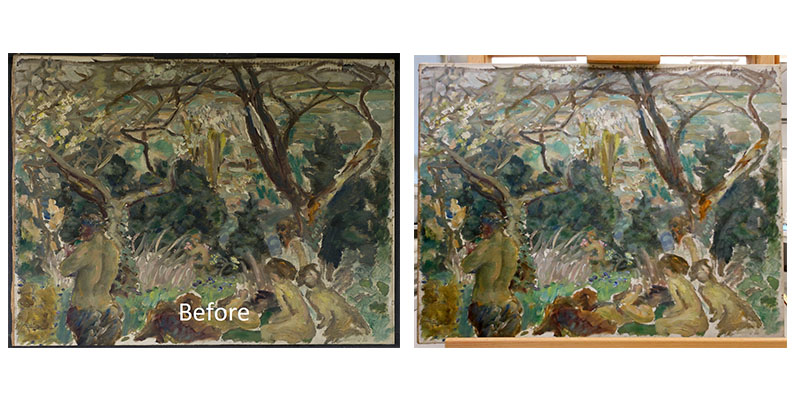 When this landscape by Pierre Bonnard went out on loan to another museum a few years ago, our paintings conservator only had time to surface-clean it, to remove the dust and grime that was on the surface.  At that time, a condition report she wrote for the painting noted that the varnish was discolored and, more importantly, that there appeared to be grime present underneath the varnish.  Grime under varnish is a clear indicator that the painting had been left unvarnished long enough to get dirty, so the painting was more than likely left unvarnished by Bonnard.

A more thorough cleaning was undertaken once the painting returned from loan.  The discolored, non-original varnish was removed and the colors brightened considerably.  In consultation with the curator, our paintings conservator did not revarnish the painting, because that is believed to be more in keeping with the artist’s intent.  It will now be displayed behind glass as a protective measure.

Our paintings conservator also noted some unusual characteristics in the oil-on-canvas painting.   One is a series of pinholes through the front of the canvas along both sides (brown arrows).  Another is the continuation of a few of the brushstrokes over onto the side of the stretcher (blue arrows). 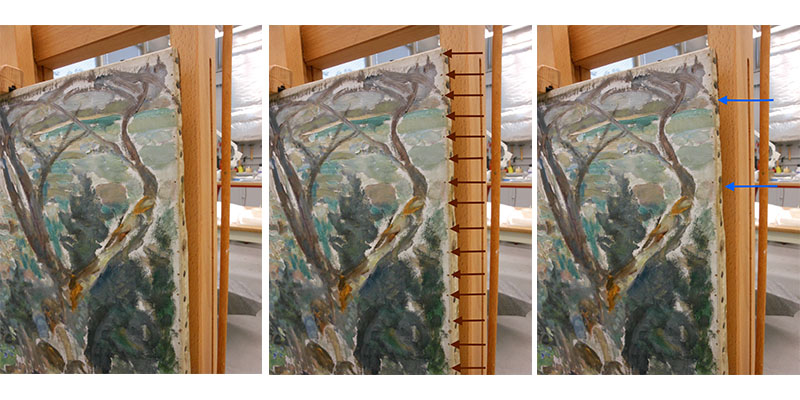 Both these characteristics suggest that Bonnard started painting on the piece of canvas while it was pinned flat, probably to a board.  Then at some point he unpinned the canvas and stretched and tacked it to the current stretcher.  There are no extra tack holes on the tacked edges, or additional folds in the canvas, proving that the painting is in its original stretch.  The canvas has never been removed and re-tacked, in other words.   And some of the front pinholes are covered with paint, showing that Bonnard continued to paint after the canvas was stretched.

Evidence of Bonnard’s on-the-fly creation of this work is also supported just by the sketchy nature of the landscape.  It looks rather unfinished, with many areas where the white preparatory underlayer is exposed.

While we can’t prove exactly how the artist created the painting, our conservators make note of this kind of forensic evidence, part of what is referred to as “technical art history.”  It’s noted in the treatment report that is now part of the conservation file.  In the future, it might aid scholarly research into the works of Pierre Bonnard.

Related: Behind the Scenes in Conservation: Nineteenth Century American Landscape