Court Paintings of Royal India: The Connecting Worlds of Hindus and Muslims 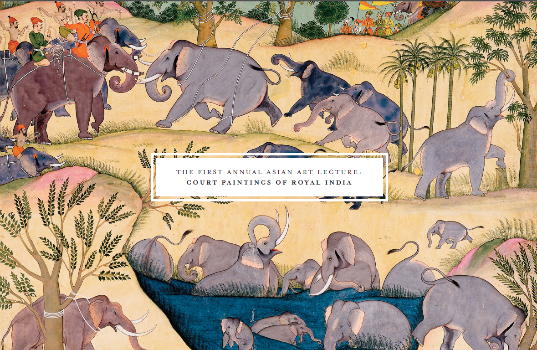 Opaque watercolor, gold and silver on paper – Court Paintings of Royal India: The Connecting Worlds of Hindus and Muslims will be the focus of the Cincinnati Asian Art Society’s First Annual Asian Art Lecture with guest speaker Dr. Vishakha N. Desai a noted scholar of Indian art at the Cincinnati Art Museum on Thursday, April 23, 2015, 7 – 8 p.m.

Dr. Desai is very familiar with the museum’s Indian paintings from her work with the collection over many years. Images of some of the best works in the museum’s collection will be included in her lecture.

“As a graduate student in Asian Art History I became interested in Indian miniatures and what they can tell us about society and the political aspects of court life,” said Dr. Desai.

Her undergraduate degree in Political Science gives her unique insights into the complex interactions between the Mughal and Rajput rulers that produced such beautiful works of art and the cultures of pre-modern, pre-colonial Indian society. Those insights have resulted in several scholarly publications including: Life at Court: Art for Indian Rulers; Gods, Guardians and Lovers: Temple Sculpture of North India; and Asian Art History in the 21st Century (editor).

The seventeenth century is often considered the golden age of Indian court painting when large and small Muslim and Hindu courts commissioned richly illustrated manuscripts and elaborate royal portraits and palace scenes. Using some examples from the renowned permanent collection of the Cincinnati Art Museum, this illustrated lecture will highlight the complex interaction between Mughal and Rajput rulers and courtiers to better understand the syncretic nature of pre-modern, pre-colonial Indian society. This lecture is sponsored by The Cincinnati Asian Art Society. A reception with Indian food will follow.