A Peek into Museum Storage

One of the wonderful things about the Art Museum is that the collection offers so many types of objects—there really is something for everyone. I am drawn to varied styles and media, but as a curatorial assistant in the museum’s department of photography, I am particularly devoted to photographs.

I spend my work days at the museum just a few minutes’ walk from the cultural treasures on view in the galleries. Of course, as in most museums, many objects in the collection are not currently on view. Photographs, like other light-sensitive media such as textiles or prints, require dark storage to slow fading. Even with the museum’s regulated gallery lighting, a photograph can only be exhibited a few months at a time in a span of a few years. This means that, for me, it is something really exciting when a photograph comes on view—it is an occasion, an opportunity for people to visit with something that, in order to preserve its long life, must remain in storage the majority of the time.

Our photographs are stored in archival boxes in a climate-controlled space. Recently, I had occasion to open the box that holds both Anna Atkins’s Myrrhis Odorata and Henry Fox Talbot’s The Scott Monument, Edinburgh, in the Course of Construction. 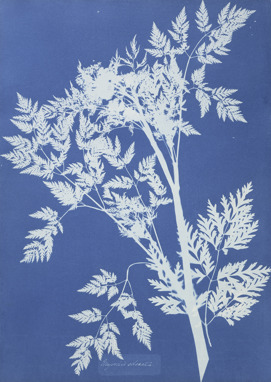 Botanist Anna Atkins is not only credited as the first person to make a book illustrated with photographs, but also the first woman to make photographs. Her handmade book, Photographs of British Algae: Cyanotype Impressions (1843) is a pioneering scientific reference work, a methodical study of plant and algae specimens illustrated with brilliant blue cyanotypes. Astronomer John Herschel had introduced the camera-less cyanotype process just a year earlier; Atkins made the plates by placing wet algae directly on light-sensitized paper and exposing the paper to sunlight. Myrrhis Odorata, part of a later study, shows the white imprint of a cicely plant. The plant’s delicate fronds against the unmistakable cyan tone are a breathtaking reminder of Atkins’s contributions to photography and science.

Just as Myrrhis Odorata stops me in my tracks, the soft, dreamy contours of William Henry Fox Talbot’s Scott Monument seem to demand a few moments of quiet contemplation. In the autumn of 1844, Talbot made a series of photographs for his book Sun Pictures in Scotland, which contained 23 salted-paper prints from calotype negatives. The Scott Monument was one of the included images.

Talbot is a key inventor on the path toward photography as we know it today. In the 1830s, Talbot had been dissatisfied with the camera lucida as a drawing tool, and resolved to find a better way to fix images on paper. He continued to experiment with light-sensitive chemicals, and by 1840, he was able to present his negative/positive calotype process to the public. (Talbot’s announcement came shortly after Daguerre revealed the metal-based daguerreotype process he developed with Nicéphore Niépce.) Incidentally, Talbot’s The Pencil of Nature, published in six installments from 1844 to 1846, is the first book with photographic illustrations to be commercially published.