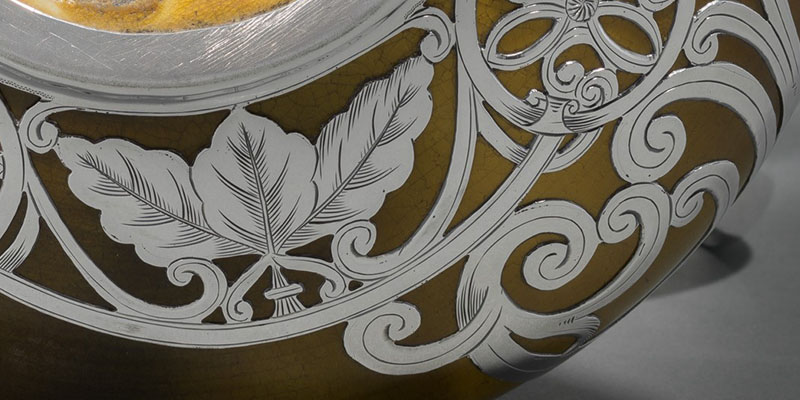 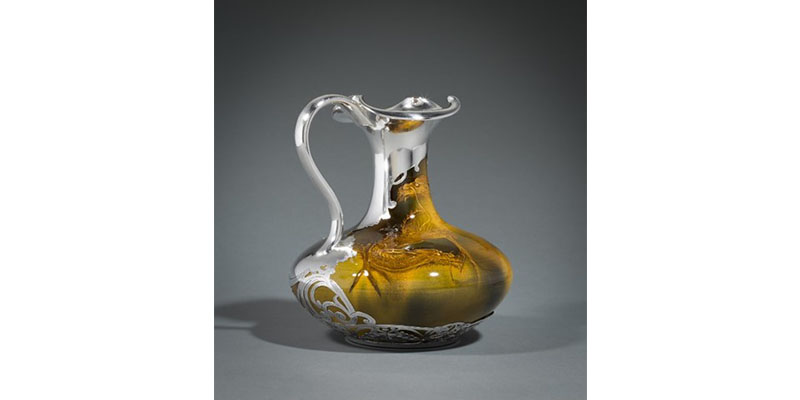 Keen-eyed visitors to our current exhibition, Gorham: Designing Brilliance, will notice a familiar Cincinnati name on two of the objects: Rookwood Pottery. On loan from the Museum of Fine Arts Boston is a Rookwood pitcher painted by Constance Amelia Baker, which is displayed alongside a show-stopping Rookwood ewer from the CAM collection, decorated by Kitaro Shirayamadani. These are unlike any of the other Rookwood examples on view in the museum, however: a thin layer of engraved silver curls and wraps around their curves, the work of Gorham Manufacturing Company.

Shaping silver typically requires a great deal of heat and pressure, which makes the graceful overlay of the metal on the fragile ceramic body seem magical. It was applied using a technique known in the period as silver deposit, but commonly referred to today as silver overlay. This is a chemical process that harnesses electric current to attract the metal to the surface of ceramic or glass objects. Gorham was quite open about their method, and never took out a patent.

Here’s how it was done, according to Gorham publications from the period:

In step three, the entire object was coated in silver, meaning that the decoration on the Rookwood vessel was completely hidden when the Gorham artist laid out what areas of the metal would remain, and which would be dissolved into the electric acid bath. Given this, it’s remarkable how sensitive the silver deposit designs are to the masked Rookwood decoration (although there are certainly cases where they awkwardly overlap). Early silver deposit tends to dominate one side of the vessel and leave in reserve the portion of the object with the greatest attention to ceramic decoration. The layer of silver that is left at the end of the application process was often further engraved by specialized Gorham craftsmen. 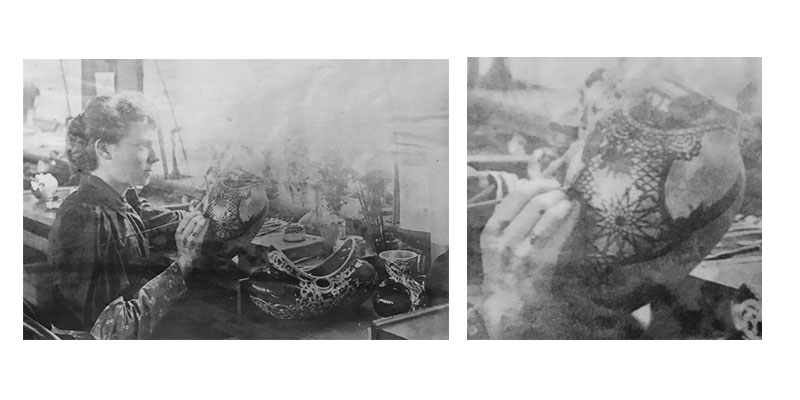 Woman applying resist varnish to a Rookwood vase that is coated with silver deposit (and detail), Women’s Work at the Gorham Manufacturing Company, Plate 1, N.D., Gorham Collection, John Hay Library, Brown University. The dark areas of the resist will protect the silver it covers from the final electrically-charged acid bath. When the resist is removed, the covered silver will be visible as on the completed examples at lower right. 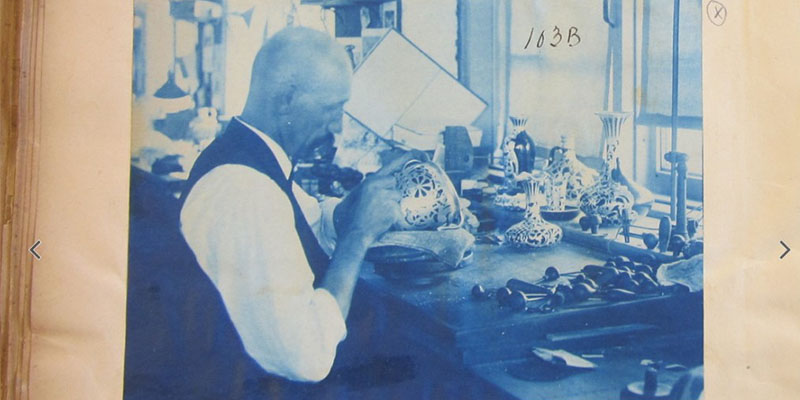 The vast Gorham corporate archive is today mainly housed in the John Hay Library at Brown University. From these documents, we know that the first Rookwood object was recorded at Gorham in early September 1892. Many of the ceramics in this initial batch were destined for display at the 1893 World’s Columbian Exposition in Chicago, where Gorham received a gold medal for “silver deposit on glass and American pottery.” They continued to apply silver to Rookwood into the early twentieth century, at least until 1906, the latest known dated ceramic with this treatment. It appears that over 2,500 silver deposited Rookwood objects were produced during this time.

In the period, these silver deposited objects received nearly universal praise. Critics observed how the rich warm tones of the Rookwood complemented the cool shine of the silver. Gorham distributed these objects to leading dealers in fine silver, ceramics and glass, many of which already sold the separate products of Rookwood and Gorham.

It is not clear if Rookwood Pottery itself approved of the embellishment of their wares by Gorham. It does not seem to have been the result of a collaboration, but rather a post-production process in which Rookwood was not directly involved. The pottery may have been purchased outright by Gorham. Discussion of the silver deposit wares is strikingly absent from Rookwood company minutes and letter books but is also absent from their physical record. In 1916, an inventory was taken of the Rookwood pottery that was on loan to the Cincinnati Art Museum. This collection served as a corporate archive for the company, reflecting their experimental and production work. Among the 2,292 pieces, not one object with silver mounts produced by an outside firm was noted. There is also no evidence that Rookwood offered Gorham mounted objects for sale in their show rooms. At the 1893 Columbian Exposition, it was Gorham that exhibited the silver deposited ware, not Rookwood. The pottery did ultimately create an in-house department for mounting their wares in silver, but this was a short lived experiment.