New Acquisition: When Past and Present Collide 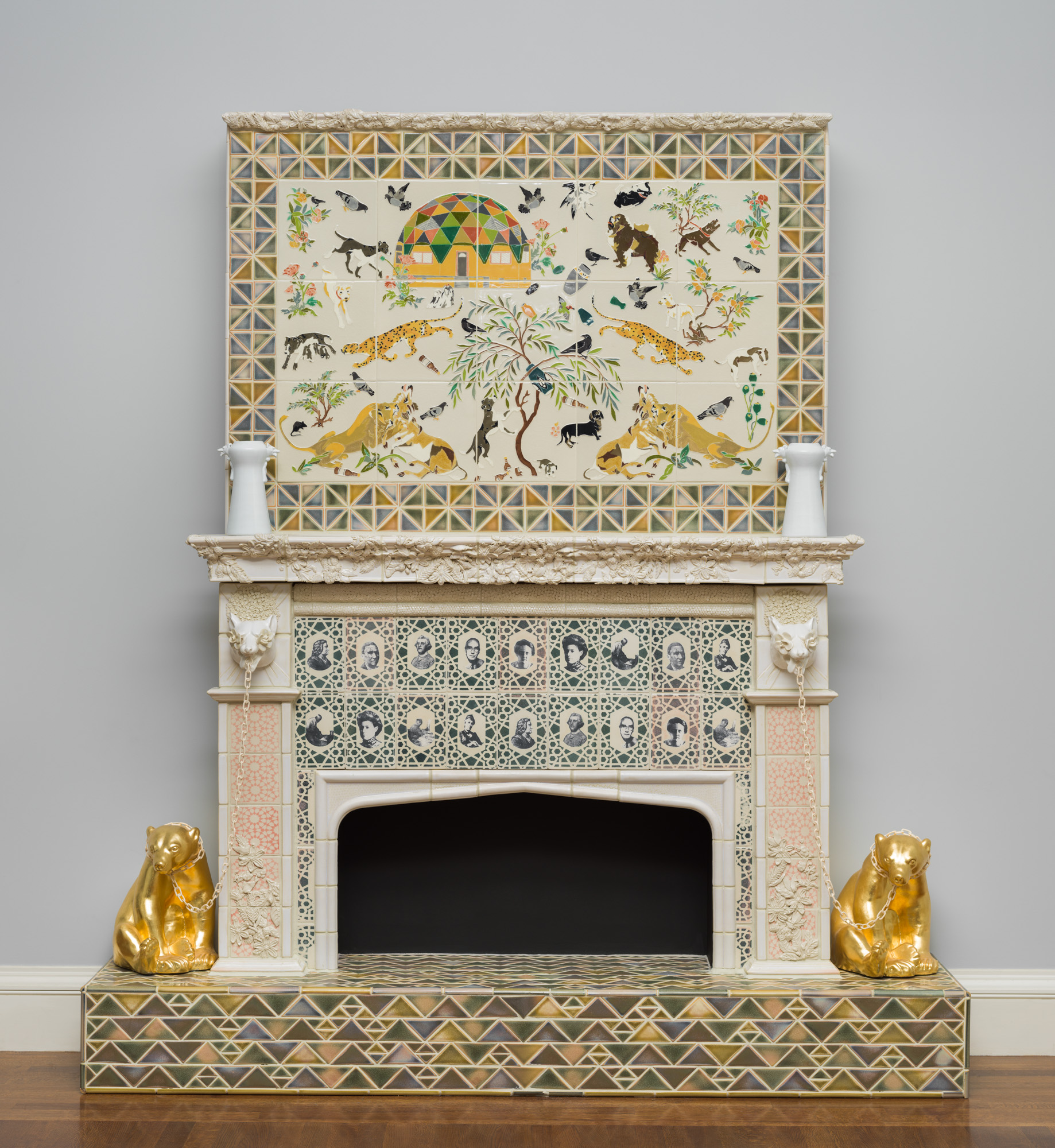 The conceptualization of the fireplace began when The Rookwood Pottery (est. 1880) threw open the doors of its archives to the artists.  With Ludwig’s directive to “go wild” in their creation of a work that simultaneously referenced Cincinnati’s rich decorative arts history and the artists’ modern practices and approaches to object-making, they dug in, wading through historic ceramic molds, glazes and forms as well as current product lines to find inspiration and working materials.

Using passages from history to tell the stories of today is key to Parker, Davis and Hammond’s individual art making. Parker and Davis, both professors at the University of Cincinnati, frequently create sculptures and installations that incorporate historical objects that they have re-imagined through 3-D scanning, then molded and cast in porcelain. Hammonds is a printmaker who applies images of historical figures and events to ceramics, wallpaper and even dance floors. In fact, the fireplace was originally displayed at the CAC with Hammond’s screen-printed damask wallpaper that features bold florals (à la William Morris) combined with portraits of black punk rockers from the 1970s, 80s and early 90s.

The themes and ideas that converge in The Living Room Fireplace are as wondrously diverse and divergent as the conversations and musings that typically occur in such a setting. 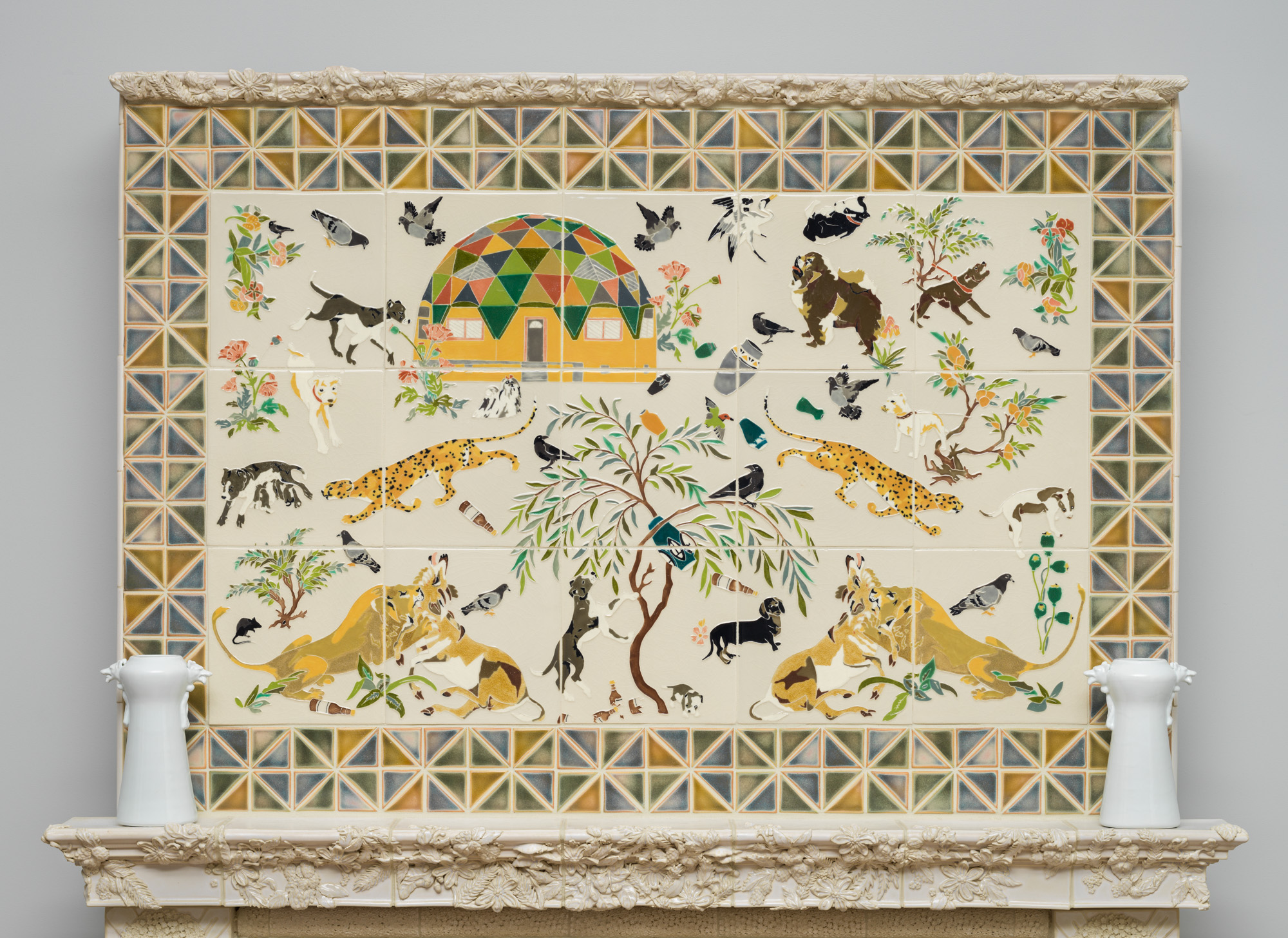 The tile mural above the mantel was inspired by a fifteenth-century Indian tapestry featuring deer and cheetah. Yet, here, the landscape is shared by architect Buckminster Fuller’s geodesic dome as well as dogs (some of which are portraits of the artists’ pets), pigeons and rodents. These reference people (Fuller worked with local gallerist Carl Solway) and creatures affiliated with the historic Over-the-Rhine neighborhood where Rookwood operates today.

Regional flora, much like that used in nineteenth-century Cincinnati art carved furniture, inspired the hand-applied relief ornament across the mantel piece. Wolf heads “borrowed” from a Boy Scout trophy, take on a slightly less vicious air with blooming eyes. They appear again, at a reduced scale, on the pair of mantel vases, created from a Rookwood archival mold. Portraits of the artists’ ceramic heroes are printed on the tiles below the mantel and include Johann Friedrich Böttger, Isaac Scott Hathaway, Josiah Wedgwood, Russel Wright, Eva Zeisel, Adelaide Alsop Robineau, Charles Fergus Binns, Maria Longworth Nichols Storer and Kitaro Shirayamadani. 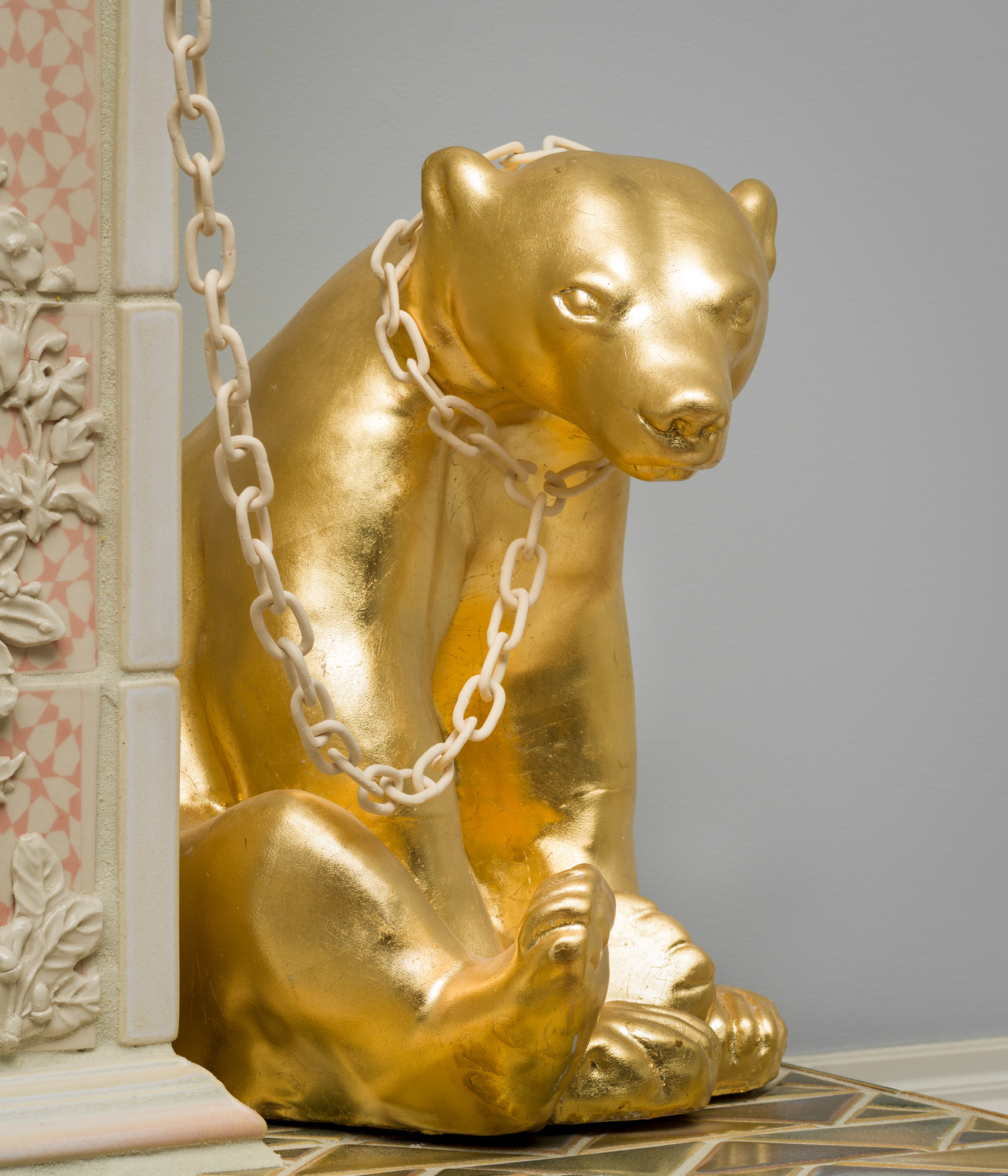 The large bears seated on the hearth are scanned, enlarged and gilded copies of a bookend sculpture, titled Honey Bear, produced by Rookwood artist Louise Abel in 1934. Bound to the fireplace by hand-wrought porcelain chains, the bears are held in control—a stark contrast to the unrestrained, nature-gone-awry depiction of animals in the mural above.

In its new museum setting, The Living Room Fireplace stands wonderfully on its own as a work by a new generation of well-respected Cincinnati artists. Yet, it also strikes an interesting dialogue with the historical Rookwood elements that share the space. It is a visual testament to the fact that Cincinnati remains a vibrant creative and artistic center. 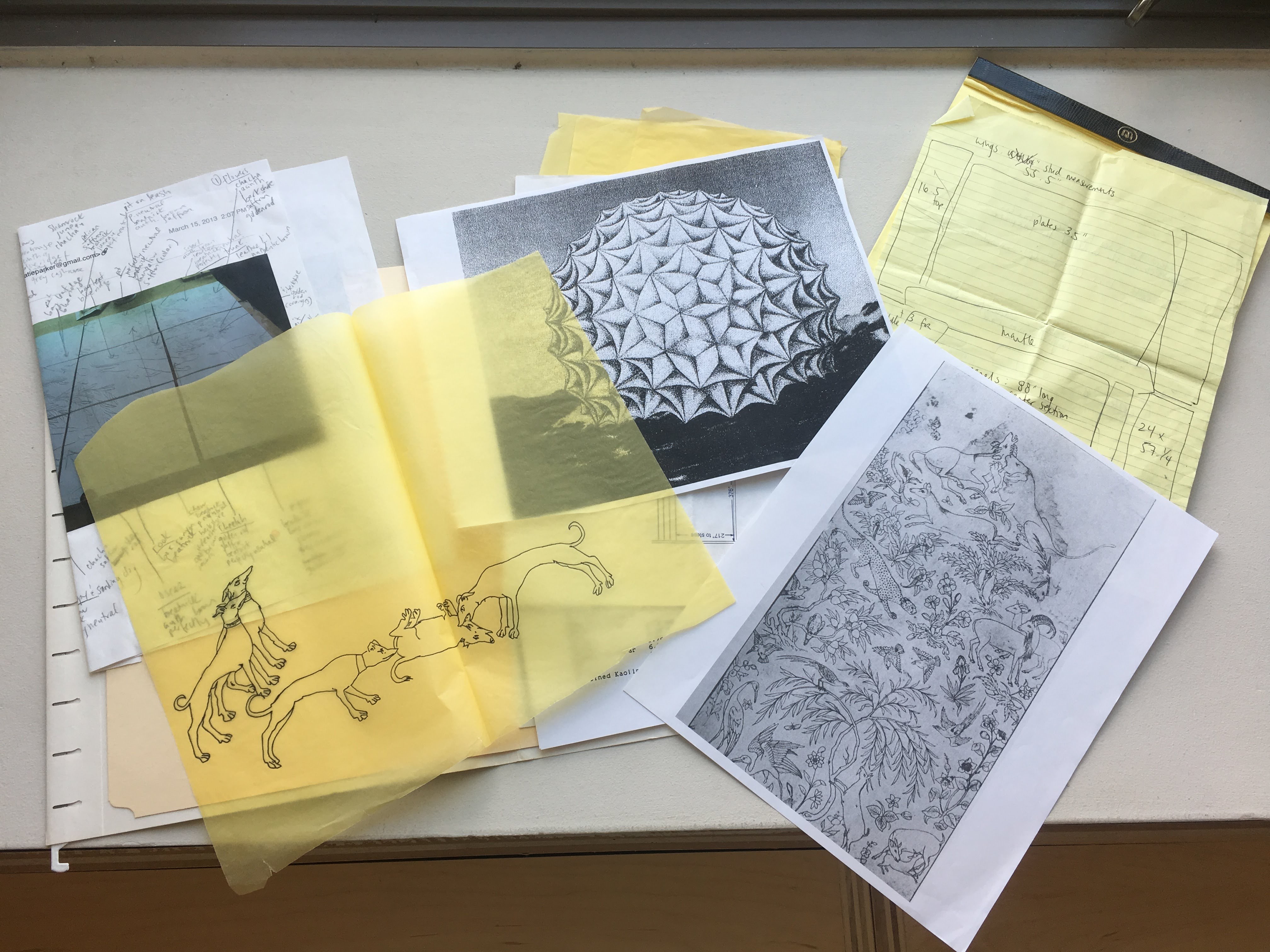 Showcasing and preserving the work of local artists is an important aspect to the art museum’s mission, and has been since 1881. As a curator, the artwork under my care and study spans centuries. Working with a living artist is always a special privilege. In this case, not only did the artists gift their work, but they generously shared their insights on the conception, themes and fabrication of the piece, helped us install it, and gifted many of their related working drawings, photographs and notes. All of this enables us to understand the piece at a level that is nearly impossible when working with objects produced hundreds of years ago. This treasure trove of information has all been carefully recorded and will be preserved for the benefit of future curators and visitors.

Archives relating to the production of The Living Room Fireplace, 2013.