Making it Gogh Together: Selecting paintings for Van Gogh: Into the Undergrowth

Our current exhibition Van Gogh: Into the Undergrowth gives visitors the opportunity to view an incredible gathering of landscape and sous-bois (undergrowth) paintings that span art history from the Barbizon School to the Post-Impressionists. But how did we select which paintings and prints would make up the show? Van Gogh: Into the Undergrowth explores the influences on Van Gogh that led him to develop his personal, unique style of landscape painting. The paintings in the exhibition provide visitors with a chance to compare Van Gogh’s work with that of his beloved Barbizon School and the innovations of color theory and painting techniques his artistic contemporaries were using to push their art to the next level as they sought a way to make modern paintings.

Esther Bell, our former Curator of European Paintings, Drawings, and Sculpture, first conceived the Van Gogh exhibition in October 2013. She spent the next few months laying the ground work with European museums to make sure that they would be amenable to our loan requests. By the following summer I was assisting her with researching paintings that would work best in the exhibition. She wanted Van Gogh paintings that would exemplify his career from when he began to paint in 1882 up to our masterpiece Undergrowth with Two Figures, created in the final month of his life. For works by other artists, Esther studied Van Gogh’s letters to his brother Theo to see which painters Vincent held in high regard. Based on this we searched exhibition catalogues, handbooks of other art museums’ collections, catalogue raisonnés (detailed listings of every known painting by an artist), and auction catalogues looking for relevant paintings by artists like Théodore Rousseau, Camille Pissarro, Paul Gauguin, and Claude Monet. Esther was also able to turn to the CAM’s collection for the following artists: Alexandre Calame, Jean-Baptiste-Camille Corot, and Jules Dupré.

Once the checklist was established, the loan request process began. When we wish to borrow a work of art from another museum or collection, a letter detailing the planned exhibition is sent to the owning institution along with a copy of the checklist, a report on our physical exhibition space, and our standard loan form. Esther wrote a few loan letters before she left the Cincinnati Art Museum in August 2014 for the Legion of Honor in San Francisco. At this point, Van Gogh was put on temporary hold until I finished the exhibition catalogue for Sublime Beauty: Raphael’s “Portrait of a Lady with a Unicorn.” In February 2015 I returned to Van Gogh, this time working with Kristi Nelson, now professor emeritus at University of Cincinnati, who came on as a project manager for the exhibition. Together we wrote the bulk of the loan letters, mailing them before the month was over. And then we waited to hear back from the other museums.

Loan requests are vetted by museum directors and the curatorial and conservation staff before they are officially approved by a loan committee or similar group. Approval of loans can sometimes take up to a year. Fortunately for us, Esther’s earlier work meant that we had established rapport with many of the museums to whom we sent letters. Because of this, we often heard back from curators or registrars before the loan was officially approved to let us know we could rest assured that their painting(s) would be part of the exhibition. However, a few loans were refused due to already scheduled exhibitions or condition issues. For example, The Morgan Library and Museum’s Van Gogh letter to Émile Bernard, including Van Gogh’s sketch of Bernard’s painting Madeleine au Bois d’Amour, and The Ordrupgaard Museum’s Blue Trees by Paul Gauguin were unavailable due to exhibition commitments. Meanwhile Dandelions, a wonderful pastel by Jean-François Millet that Van Gogh greatly admired, was deemed too fragile to travel by the Museum of Fine Arts, Boston. 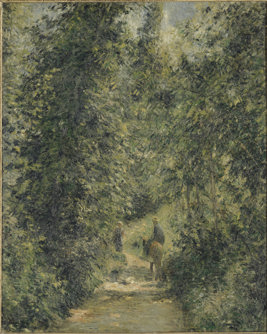 Our biggest challenge was getting a painting by Camille Pissarro. We felt it imperative to have Pissarro represented in the show because he was a good friend of Van Gogh’s. Initially we approached the Cleveland Museum of Art for their Pissarro painting Edge of the Woods Near L’Hermitage, Pontoise. When they sent their loan refusal in June 2015, Kristi and I went through the Pissarro catalogue raisonné searching for other works that would fit the parameters of Into the Undergrowth. Next we sent a letter to the Nelson-Atkins Museum of Art asking for their Wooded Landscape at L’Hermitage, Pontoise, only to be told in October that the painting needed to stay at the museum for the grand reopening of their newly renovated Impressionist galleries. By this point, we were getting worried—there were only a few more months before we would be unable to add a Pissarro painting in the exhibition catalogue and, more importantly, we were dangerously close to many museums’ loan request deadlines. The next painting on our Pissarro list was the Musée d’Orsay’s Road in the Woods in Summer (Chemin sous bois, en été). Our hope was that, since we were already borrowing the Musée d’Orsay’s Émile Bernard painting of his sister Madeleine, the museum would not be averse to adding another loan for our exhibition. Imagine our relief when we received a letter from the Musée d’Orsay in February 2016 confirming the Pissarro loan! Even better, it came in time for the painting to have a full entry in our catalogue. Though it was not our first choice, Road in the Woods in Summer ended up being a perfect fit in the exhibition and allowed us to make connections with the other landscape paintings in the show that would not have been possible with either of the first two requested Pissarro works.