A Memo on Mementos of Affection: Ornamental Hairwork in Jewelry and Portrait Miniatures

Working on Mementos of Affection: Ornamental Hairwork in Jewelry and Portrait Miniatures proved to be an interesting challenge because the focus of this rotation is on hairwork decoration found on case backs, which are not usually displayed. So why devote an entire rotation to the backside of miniatures? Before photography, a portrait miniature was usually the only likeness made of a person. Often, hair worked into a design, knot or braid was included on the reverse of the portrait. Since hair doesn’t decay, it was a way to make loved ones and their memory immortal. By adding hair to a miniature it created a complete token of self that was a physical representation of the relationship between the sitter and the owner of the miniature. Because of this strong association, hair played a large role in the concept of sentimentality that was pervasive in popular culture during the eighteenth and nineteenth centuries. In the early twentieth century a negative change in attitude towards sentimentality and the development of germ theories created a revulsion towards hair separated from the head. Which is why most people say “Eew, gross,” when I tell them I’m displaying objects that include hair. But when taken in their historical context, and once the painstaking effort that went into creating hairwork is understood, these pieces move from disgusting to fascinatingly beautiful art.

Hairwork found in miniatures was created using a flat working surface made of china or glass called a palette. Locks of hair were saturated with adhesive, laid flat on the palette and then curled or braided into flat plaits or knots. Extremely intricate designs were created using goldbeater’s skin, which is made from the outer membrane of ox intestines. Hair was flattened on skin lined with gum to make a sheet of hair that could be cut into shapes. Further decoration was added using gemstones like pearls, gold wire, small pieces of glass or ivory, metal letters (called ciphers), gold foil, or watercolor. Almost all hairwork designs incorporated a complex symbolism that created messages of love, memory, grief, and death.

One of the most common designs seen in hairwork is the Prince of Wales feather. The name derives from the English Prince of Wales’ heraldic badge of three feathers rising from a gold crown. The back of Auguste-Jean-Jacques Hervieu’s Young Man with the Initials J. L. F. (fig. 1) is an excellent example. The large swooping feathers easily conform to the oval shape of the miniature case. (A fun side note on the artist: Hervieu was a good friend and travelling companion of Frances Trollope and lived in Cincinnati from 1828–30 organizing cultural events and teaching while Trollope failed to wow people with fancy goods sold at her Trollope’s Bazaar. He would later provide illustrations for Trollope’s book Domestic Manners of the Americans, which lambastes American, and specifically Cincinnati, culture.) 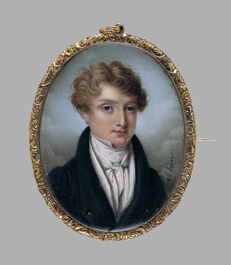 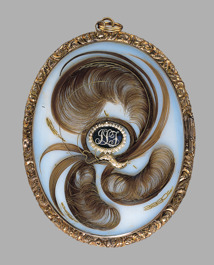 Love was always a prominent concept in hairwork and it could be expressed by wearing a piece that includes a spouse or lover’s hair. This practice goes back to the seventeenth century. In fact, the oldest piece in the rotation dates to about 1680 and is only an inch long (fig. 2). The back of an unknown woman’s portrait painted by Susannah-Penelope Rosse has gold foil decoration set on top of a background of hair. The incredibly intricate design is a wreath made up of eight varieties of aster, known as the herb of Venus. Inside the wreath are two flaming hearts signifying extreme passion and ardor. 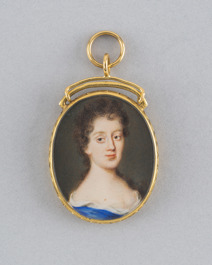 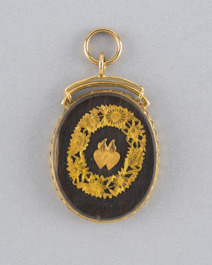 Multiple people could be represented within a single hairwork. The Allegorical Scene Representing Love (fig. 3) abounds with symbolism on both sides. On the front is a young woman seated next to a heavily decorated pedestal while playing a pearl (representing purity)-encrusted lyre (harmony). Her attention is pulled away by Cupid to a pair of doves (love and constancy). A banner above the scene is inscribed Sacre de Amour et Amitie which translates as “coronation of love and friendship.” On the reverse are layered hairworks from three individuals. Each piece is woven, braided or knotted in such a way that their designs seem to have no end or beginning. These never-ending patterns represent eternal bonds of love and friendship. 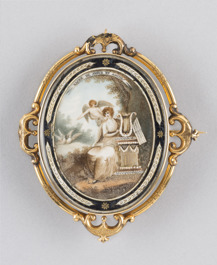 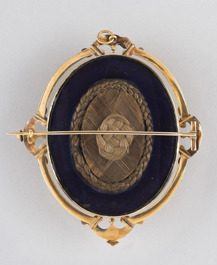 Mourning could also be expressed through hairwork. Those made for or by grieving parents can be heartbreaking. A late eighteenth century miniature that at first glance appears to be a loving family in a bucolic landscape is a memento mori (literally, remember death) (fig. 4). It was most likely made to mourn the child who points to the flying dove, which represents the deceased’s soul. The father holds a book as if interrupted in educating his distracted child. In art, books have long symbolized knowledge, and the half-open one here is a poignant suggestion of a life cut short. Finely chopped hair was mixed into the paint that forms the ground. 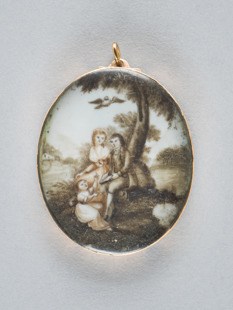 A century later it became popular for ladies to decorate their homes with their own amateur-made hairwork pieces that could be prominently displayed. These homemade works were considered to represent true emotional integrity as the untrained women painstakingly created intricate decorations. One such hairwork was likely made by the grieving mother of the toddler Eugénie Berset (fig. 5). Though not a professional artisan, the woman who made this handily utilized the large 4 x 3 inch format, a sheet of glass, and goldbeater’s skin to create a three-dimensional mourning scene. All of the main details are on a piece glass set before a background painted on ivory. The woman and tombstone are reverse painted with watercolor, while pulverized hair was mixed in the paint for the textured ground. The final layer is the willow tree and forget-me-nots made of hair that project forward away from the glass. 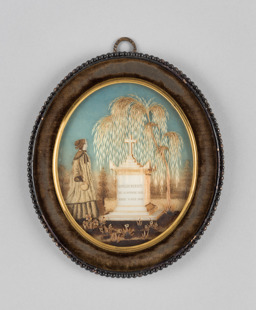 Image Credit: French School, Memorial for Eugénie Berset, circa 1860, watercolor on ivory, watercolor on glass, and hair, Lent by the Fleischmann Foundation, L26.2008:223