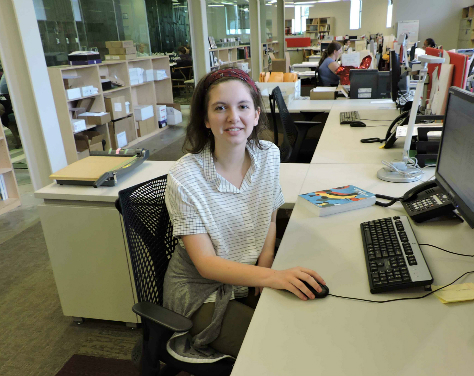 This summer I’m working as an intern in the Cincinnati Art Museum’s Development Department. Within the scope of my responsibilities, I’ve conducted prospect research, contributed text to the museum’s website, and sorted files, as well as completed the classic intern assignments of making copies and organizing the storage closet. And at CAM, even those small tasks have been engaging, because they play a role (however big or small) in truly connecting people and art. Here are four things I’ve learned as CAM’s Development Intern.

1. Be bold! When I first joined CAM’s team, I was timid and often too shy to get to know the staff. It turns out that the people I work with are welcoming, kind, and funny – and totally willing to get to know the intern! I’ve learned to reach out to the people around me, and better use the connections I make.

2.The arts both create community and need the community to survive. Working in Development, I’ve learned firsthand that CAM truly relies upon corporate partners, foundations, and individuals to sustain its valuable programs and even to keep the lights on! When you realize that without the philanthropy of the public, the arts couldn’t exist, stewardship of economic resources becomes even more important. And there’s something beautiful about the reciprocal relationship that emerges: art needs people to fund it, just as people need art to enrich their lives.

3.Databases are your best friend. (And now I know how to use them!)

4. Art takes time to soak in! Coming to the museum

every day, I’ve taken advantage of the chance to consistently view the same few pieces. Two or three times a week, I visit the Asian and Near Eastern wing, and sit in front of the statues, fragments from ancient Hindu and Buddhist temples. The Water-and-Moon Guanyin, which represents the Chinese Bodhisattva of Wisdom, especially captures my attention. In the past, I’ve found such statues repetitious and skimmed past them. However, after first diving into the cultural and philosophical background of the piece, I’ve learned that my appreciation continues to grow parallel to the amount of focus I allow it.

As a college student passionate about the arts, my time with CAM has given me valuable insight into the world of museums, and the dedicated work it really takes to run them.