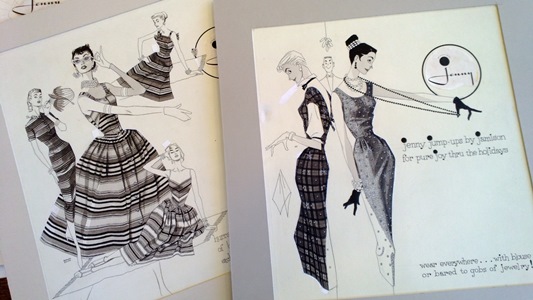 Somewhere, deep in the bowels of the Cincinnati Art Museum, away from the hustle and bustle of the public galleries, is a time machine. A time machine made of paper.

Before you start to worry that the Art Museum has been conducting illicit time travel experiments in its basement, I should clarify that this is a metaphorical paper time machine (not to be confused with Hyperbolic Wooden Space Rocket, the progressive rock band of the 1970s). I’m actually referring to the Art Museum’s archive, a remarkable collection of materials spanning almost 150 years of art history in Cincinnati and beyond. With records relating not only to the Art Museum itself, but also to the Art Academy of Cincinnati and to many locally and nationally important artists, the archive is an exceptional resource for Museum staff, researchers, authors, educators and students. 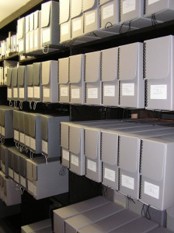 I’ve been lucky enough to be the Art Museum’s archivist since November 2013. So far I’ve only had the chance to explore a fraction of the hundreds of boxes, volumes and other items that make up the archives, but here is a whistle-stop tour of just a few of the highlights.

The largest group of records in the Archives comes, unsurprisingly, from the Art Museum itself. Although our earliest records date from 1881, it was only in 1975 that the importance of the material was finally recognized. As a result, records were gathered from all over the Art Museum, organized and cataloged, and the archive finally opened to staff and outside researchers in 1981, the Art Museum’s centennial year. 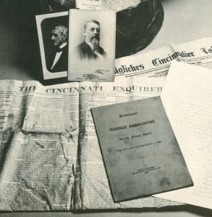 This collection of records is extremely valuable, not only for the Art Museum’s own institutional memory but also for the broader study of art history. It provides a fascinating insight into the operation and evolution of an early American art museum, and is a unique resource through which to explore the development of Cincinnati as an art center. Amongst the highlights of the collection are the records of the Art Museum’s early directors, which include hundreds of letters to and from important American artists of the 19th and 20th centuries. Many of these relate to the loan of works to the Art Museum or to the annual exhibition of American art held from 1894 to 1941, but others include interesting asides. For example, in 1900 Joseph Henry Sharp wrote to Director Joseph Gest ostensibly to ask for a supply of paint, but he also took the opportunity to share his trials and tribulations. At the time he was living in a teepee at the site of the Battle of the Little Big Horn; as well as suffering from malaria, he gives a delightfully detailed description of his colonic troubles.

Director Gest’s correspondence also provides a glimpse into the day to day issues that he had to attend to. For example, in 1904 a lady wrote to him that she had lost a coat button at the Art Museum on Sunday, and asked if he would please look for it. He also fielded offers of potential exhibits including a three legged calf, a dried cat, and a gun used in the Hatfield-McCoy feud: “It has killed more than 30 men”. He didn’t take up these offers and, as far as we know, the missing button is still out there…

Although there are many other treasures among the Art Museum’s own records, including a huge collection of exhibition catalogs and an extensive photographic archive, some of my personal highlights are found in the records of the Art Academy of Cincinnati, the second major part of our archival collection.

The Art Academy was originally founded in the 1860s as the McMicken School of Drawing and Design, eventually becoming part of the Cincinnati Museum Association (the body that oversees the Museum) in 1884. The earliest item from the Academy that we have in the Archives is the 1868 course catalog; later materials include extensive student and faculty records, of particular value to researchers since many important local artists, such as Frank Duveneck and Charley Harper, studied and taught at the Academy.

One of my favorite parts of the collection, however, is a series of letters sent back to former teachers or colleagues at the Academy from men who had gone off to fight in World War I. For many of the boys, art clearly remained an important part of their lives; some were able to put their graphic skills to practical use helping the war effort, whilst for others their love of art provided a link to happier times and, in some cases, even a motivation to fight. In June 1918, John E. Weis, a member of the Academy faculty, wrote to Director Gest describing how he had been made a “camofleur” – someone who designed and painted military camouflage. In another letter, Weis writes of his fear that, in the event of a German victory, an institution like the Academy wouldn’t survive, but “its things of this sort that I’m going to fight for”.

Another charming find I made in the Academy records is a set of doodles that a (presumably) bored instructor sketched in a class register sometime in the late 1800s. One of my favorites is this pencil drawing of a beautiful young lady. Who was she? A student, muse, or paramour? Who knows, but little discoveries like this are a real delight, and provide a provocative glimpse of a moment otherwise lost.

The final component of the Art Museum’s archive is an assemblage of material relating to numerous local artists and art organizations, including Elizabeth Nourse and the Rookwood Pottery, to name but two. Each artist or organization has their own file, typically including items such as newspaper clippings, exhibition catalogs and announcements, plus a variety of other ephemera gathered over the decades. As well as these collected materials, we are also very pleased to hold original records from of a number of local artists and art organizations. One of my favorite collections comes from artist Romilda Dilley, who was the head artist and art director from 1948 to 1956 for the Jenny department store in Cincinnati. Her work includes wonderful illustrations for ads that were published in local newspapers. Just gorgeous. 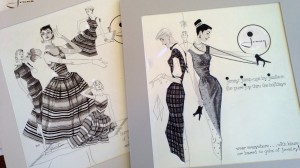 So, if this whirlwind tour of the archives has whetted your appetite for a quick trip back in time but you don’t happen to be the owner of a TARDIS or souped-up Delorean, the Cincinnati Art Museum Archives are the next best thing. To find out more, please visit the Art Museum’s Library + Archives webpage for our contact details and information on accessing the collection.