by Amy Dehan, Curator of Decorative Arts and Design 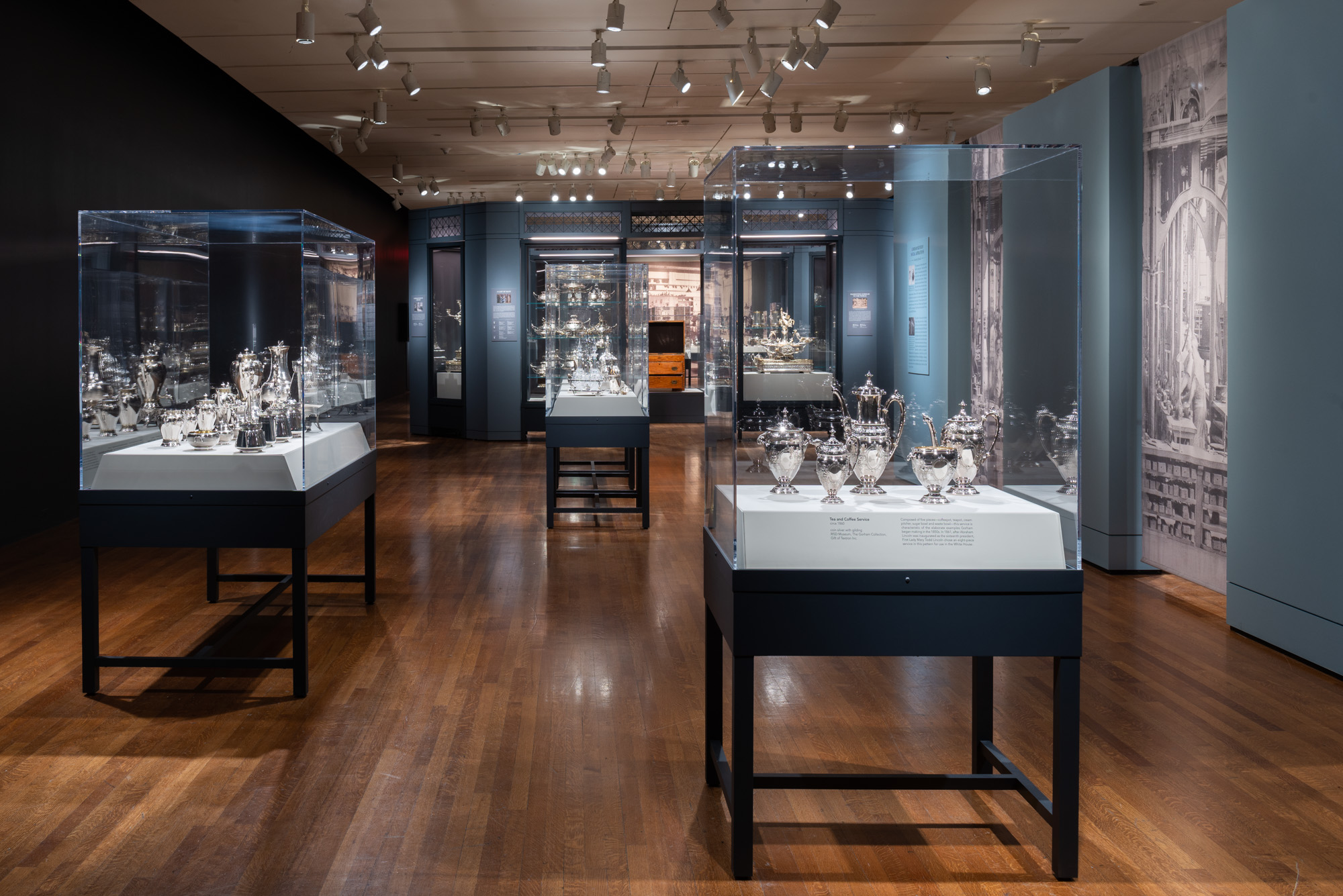 While the museum is not open, we invite our online visitors to explore this dazzling exhibition from home.

Prepare to be dazzled by this special exhibition that explores the radiant achievements of an American firm, the Gorham Manufacturing Company. Through the ingenious coupling of art and industry, Gorham rose from a small workshop established in Providence, Rhode Island, in 1831 to become the largest silver manufacturer in the world.

From elegant tableware to jaw-dropping one-of-a-kind creations for world’s fairs, Gorham met the desire for creative and finely executed silver wares for more than 120 years. This exhibition of nearly 700 works showcases the extraordinary talent and skill of the firm’s designers and craftspeople, as well as the range of styles and forms created for the use and enjoyment of its patrons during the firm’s heyday (1850–1970).

View the majority of one of the most extravagant silver services ever made by Gorham: 816 pieces crafted between 1866 and 1880 for Chicagoans Henry Jewitt and Elvira Furber. The Furber Service is displayed inside a large structure styled after Gorham’s pavilion at the 1904 World’s Fair in St. Louis, Missouri.

Designed to serve 24 people, the service includes a range of forms considered essential to the over-the-top Victorian ritual of dining: an impressive epergne (or centerpiece), trays, candelabra, oyster tureens, celery vases, crumb scrapers, grape sheers, asparagus tongs—to name just a few. Styles within the service range from those inspired by Classical, Egyptian, English, French, American, Russian and Japanese design. Such a diversity of expressions, however, is united by the shared combination of matte and polished silver and gilding.

The same creativity and innovation manifest in Gorham’s silver wares also pervaded the company’s approaches to marketing and selling their work. When Cincinnatians weren’t buying locally crafted silver, they were buying Gorham, and there are many Cincinnati connections found throughout the exhibition. One of these is the Rebekah at the Well Pitcher, presented as a wedding gift in 1854 by Cincinnati banker Lewis Whiteman to his daughter Louisa.

Additionally, in 1872 and 1873, local merchant William Wilson McGrew introduced the crowds who attended the Cincinnati Industrial Exposition to stunning works by Gorham, including the silver and gold epergne, illustrated at left, that would later become the centerpiece of the Furber service. And in the 1890s, Gorham was adding lacy silver decoration to Rookwood Pottery.

To attain and maintain its prominence, Gorham harnessed the creative power and skill of the best designers and craftspeople hired from around the world. Hundreds of workers, trained in many processes, utilized dozens of tools and a specialized range of equipment, machines and technologies. Luscious design drawings, as well as tools and intricate casting patterns made and used by Gorham’s artists, reveal the complex practices essential to Gorham’s enterprise—the act of creating poetry in silver.

Learn how Gorham’s works relate to present-day issues of equality, labor, craft, indigenous people, the environment and more by tuning in to the podcast-style audio experience called Soundwalk before, during or after your visit. Created by the RISD Museum, Soundwalk can be accessed at cincinnatiartmuseum.org/soundwalk.

Gorham Silver: Designing Brilliance 1850–1970, organized by the RISD Museum, was made possible by a sponsoring grant from the Henry Luce Foundation with additional support from the Zennovation Fund, the National Endowment for the Arts, the RISD Museum Associates, Textron Inc., the Rhode Island Council for the Humanities, friends and members of the Board of Governors, and a generous in-kind gift from Spencer Marks, Ltd.

Generously supported by the John A. Schroth Family Charitable Trust