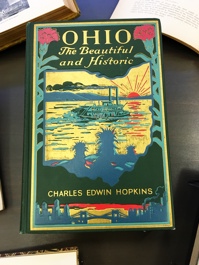 We’re just about a month away from the 2016 election. With that in mind the Mary R. Schiff Library and Archives have a selection of rare books on display which relate to the White House and Washington D.C., its accoutrement, inhabitants, and grounds. The books included highlight the connection between the state of Ohio and the White House. Ohio has been home to eight U.S. Presidents including Ulysses S. Grant, Rutherford B. Hayes, James Garfield, Benjamin Harrison, William McKinley, Warren G. Harding, and of course Cincinnati’s own William Howard Taft. 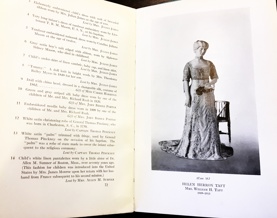 The books feature fashions worn by first ladies depicted in detail, a catalog of images of the White House porcelain service designed by Haviland & Co. for President Rutherford B. Hayes from 1879, and a set of hand-colored photographs featuring Japanese cherry blossom trees. The cherry blossoms, which are celebrated every year with a festival were first dedicated in a simple ceremony by First Lady Helen Herron Taft and Viscountess Chinda, wife of the Japanese Ambassador, on the north bank of the Tidal Basin in West Potomac Park on March 27, 1912. Additionally, on view is a beautifully embossed book entitled, Ohio, the Beautiful and Historic: the Story of the “State of Presidents.” This volume published in 1931 describes the history of Ohio from the age of the prehistoric mound builders to its present (1931) “status as a wealthy and progressive state in the heart of the union.”

Speaking of Presidents did you know Mount Adams derives its name from President John Quincy Adams, who delivered the dedication address for the Cincinnati Observatory? The Observatory, still in operation, was relocated to Mount Lookout in 1871.

Visit the Mary R. Schiff Library today to examine these and many other related books and materials.