This month sees the opening of the newly renovated Schmidlapp Gallery following the most recent - and most radical – reinvention in its 110 year history. Over the years the gallery has served a number of different roles. Immediately prior to the latest revamp, it provided a showcase for a number of iconic pieces from the museum collection, each with its own curtained viewing space. For many years before that, the gallery housed our collection of antiquities.  For such a useful space, a central artery of the museum, it almost never existed. 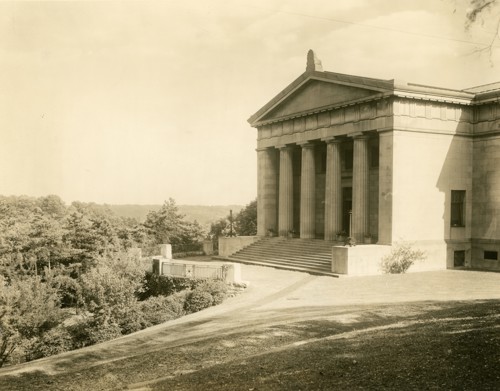 When the Emma Louise Schmidlapp Memorial Building, comprising both the Schmidlapp Gallery and the current main entrance hall, opened on May 18, 1907, it was the first addition to the original 1886 museum building. The extension was gifted to the museum by local banker and philanthropist Jacob G. Schmidlapp in memory of his daughter, Emma Louise. She, along with her mother, had been tragically killed in a train crash in February 1900. Mr. Schmidlapp’s original intent was for a building that would house the museum’s library, but as the plans evolved, it was decided that it would serve as exhibition space for the museum’s sculpture collection. Designed by Chicago architect Daniel Burnham, the initial proposal was for a domed building, “monumental in character and practical in scope”. However, there were concerns as to how well this structure would harmonize with the existing buildings on the site. As a result, a more modest addition, “of much dignity and beauty” (according to the museum’s annual report of 1901), was substituted. However, by late 1903 this design had too been abandoned; that year’s annual report records, rather dejectedly, “the effort to follow the style of the existing buildings was given up, and…the Trustees accepted a design in Doric Greek as the most simple and dignified treatment of the problem”. 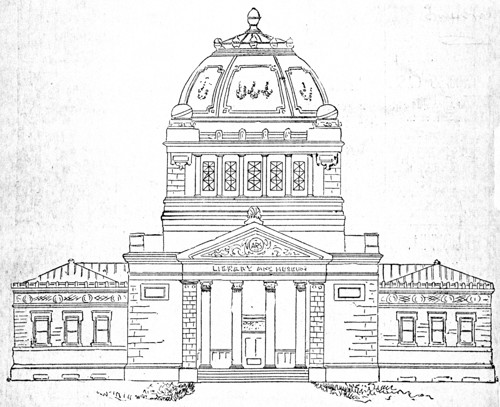 The lack of cohesion between the new addition and existing building was bemoaned by many, including the museum’s original architect, James W. McLaughlin. “A Greek temple,” McLaughlin told a reporter, “is all right in its place, but it looks foolish tacked onto a massive building like the Art Museum”. McLaughlin had proposed his own plans for an extension, which were not adopted. Whilst he admitted he was disappointed by this, he insisted that his objections were not those of a disgruntled architect, stating: “I wouldn’t care who designed the building if it had been kept the near the style of the [original]”.

In spite of these objections, construction was finally ready to begin early in 1905. However, one final snag had to be overcome. Mr. Schmidlapp’s gift had been for a building to cost roughly $100,000. Unfortunately, this sum only covered the cost of the new hall, not the gallery connecting it to the existing museum building, an important detail that seems to have been overlooked. For a time, it seemed the new hall might be a standalone structure, completely separate from the main building. Realizing this was not a very practical arrangement, Mr. Schmidlapp graciously agreed to pay the additional $18,500 needed, though only on the condition that the museum covered the $9,259 for alterations required to the existing building.

These alterations included the replacement of the original 1886 staircase in the museum’s main hall, where the connecting gallery would emerge. The demolition of the staircase proved another source of controversy, with “artists, architects and many of the beauty-loving patrons of the Cincinnati Art Museum…bewailing the loss of the most beautiful staircase in America”. James McLaughlin weighed in again, describing the staircase’s removal as “an act of vandalism for which there is no excuse”. It’s hardly surprising that the museum’s annual report for 1905 describes, rather coyly, how the staircase was “taken down”. 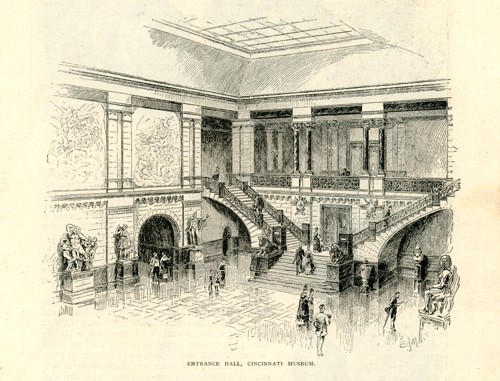 Despite the project’s trials and tribulations, the finished building was well-received when it finally opened in May 1907. One newspaper report described it as the “most perfect statuary hall in America”, with the Doric style of the extension considered to be “a most appropriate setting” for the museum’s collection of classical sculpture. The connecting gallery was also lined with Egyptian, Greek and Roman statuary, interspersed with potted palms and hydrangeas. It was particularly well-lit, thanks to a skylight running the entire length of the corridor. When the second story was added to the gallery in 1938, the skylight was removed and much of the natural light was blocked. The latest renovation, however, reintroduces a flood of light into the gallery, with new, floor-to-ceiling windows along the courtyard side of the corridor. With viewing areas for individual artworks and comfy seating (though no palms or hydrangeas), the gallery will be transformed into a vibrant new space that will certainly continue to provide a “most appropriate setting” for years to come. 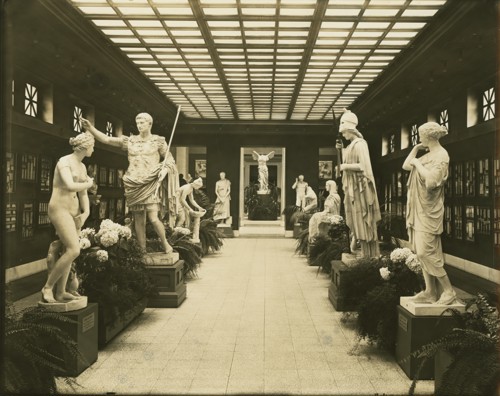 All images reproduced from materials held in the Cincinnati Art Museum archives.