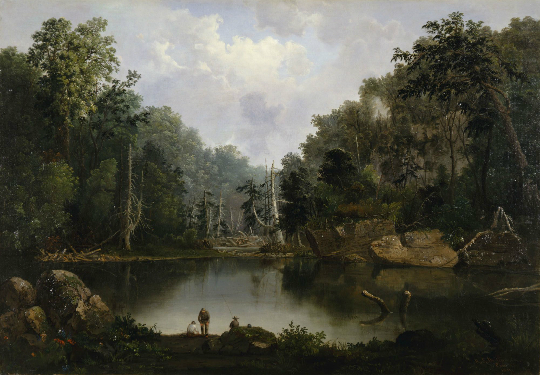 We’ve asked Cincinnati Art Museum lovers to send us thoughts and feelings about an artwork at the Art Museum! We feature these thoughts for #MyInterpretationMonday. This week,  Hamilton High School Student Amy shares her thoughts on  her favorite artwork at CAM.

As a citizen that was born and raised in the Cincinnati region, I am more drawn to the artwork that shows how beautiful, and diverse my city really is, I never really was into art for the technical terms, but for more as to how it appealed to me. So with that being said, i picked a piece that showed off the looks of my town and my love for nature. the piece I admired the most was Robert S. Duncanson: Blue Hole, Little Miami River. Duncanson was one of the first African American artist to make it big. He really did a fantastic job with this being one of many paintings.

During the 1820-1900, many people focused on nature which helped embodied the rise of individuality and standing out. This art piece was to represent this Cincinnati river, which I am very familiar with, another reason why i chose this piece.  During this time period the population grew due to so many new slaves running away to freedom, which made the river a major settlement area. which is why Duncanson was very appealing to most, because African Americans at the time were fighting for their freedom. Duncanson helped slaves realize that they could amount to anything they wanted, and slavery wasn’t their only option. That is why I think  this piece is very important.

Share your interpretation on CAM’s blog! Send your #MyInterpretationMonday to [email protected] and we will feature your perspective on an upcoming Monday!