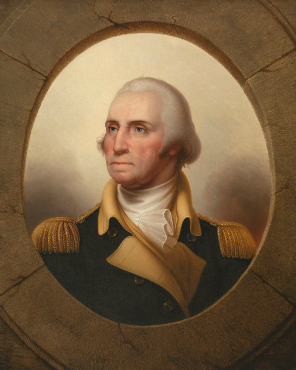 We’ve asked Cincinnati Art Museum lovers to send us thoughts and feelings about an artwork at the Art Museum! Each week, we feature one interpretation here on our blog. This week, Shannon Karol takes a deeper look at a portrait of an iconic president.

In honor of President’s Day, I decided to spend some time with Rembrandt Peale’s portrait of George Washington.  This is one of over 80 portraits that Peale painted of Washington, so it’s definitely worth a closer look.

If you stop to think about it, you probably see George Washington’s face every day.  But have you ever paid attention to how he is portrayed in his portraits?  In Rembrandt Peale’s painting, we see Washington dressed not in a suit, but in his military uniform.  One of the reasons that Washington was selected as our first president was because of his strength and vision on the battlefield, and the inclusion of his uniform perhaps serves as a reminder of that.  There is certainly a steadiness to Washington in this portrait, as well.  He looks noble, with his chin lifted, gazing not at us, but up into the air.  But Washington also looks full of life, with his flushed complexion and a slight twinkle in his eye.

What I find really interesting is that this particular portrait was painted in 1845, nearly fifty years after Washington’s death.  I love that even now, 216 years after his death, I can take a group of kids to look at this portrait and every one of them knows who this man is.  Washington has become a mythic figure—he is the “father of our country,” after all. He remains one of the most recognizable faces in American history, whether he’s shown as a general or a president.  How else do we see presidents depicted in art and popular culture today? Which presidents do you think we’ll still be talking about on President’s Day 2215 ?

Share an Interpretation on CAM’s blog! Send your #MyInterpretationMonday to[email protected] and we will feature your perspective on an upcoming Monday!*

*We may not be able to post all entries we receive due to volume of entries and/or copyright restrictions.