Summertime and the living’s easy

The sun is shining and the beach is calling–enjoy these ten artworks from the museum’s permanent collection to get you in the summer spirit. 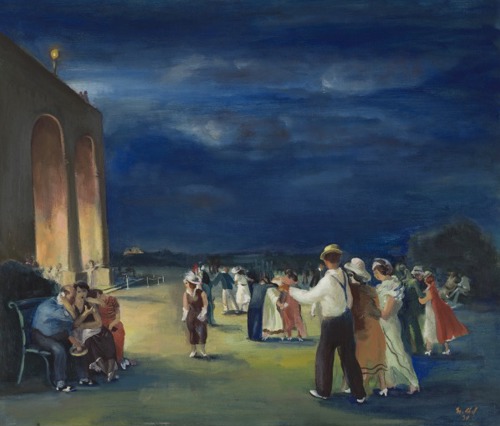 Myer Abel’s Ault Park Promenade features people socializing under the evening sky. The scene is bathed in light from two sources: the cool light of the moon hidden behind the clouds and the warm, inviting light emerging from the illuminated arches of the Ault Park Pavilion.

Although Abel’s style varied over time, his works of the 1930s portray the so-called American Scene: glimpses of daily life in Cincinnati depicted in a realistic manner. 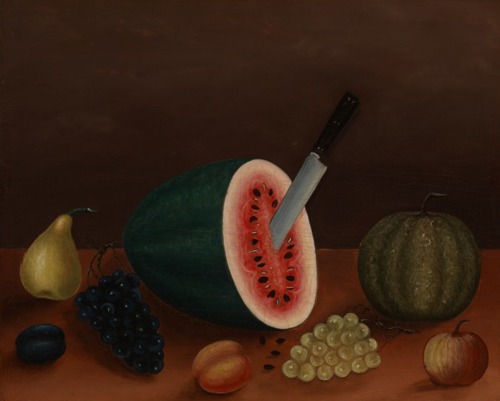 Still-life paintings were popular in the nineteenth century for the ornamentation of dining rooms. The central motif of this tabletop composition is a watermelon sliced through with a knife that remains embedded in its flesh. The artist’s interest in pattern is evident in the ring of watermelon seeds that alternate in shape and color. Atkins observed and recorded the tendrils of the grape vines and the cantaloupe’s texture. To indicate shadows, areas beneath the fruit are darker, and stylized shadows appear under the watermelon seeds on the table. Nevertheless, with limited shading the fruit seems to hover weightlessly. Also distinctive is the way the pieces of fruit are separated, so that nothing overlaps.

Watermelons appear in many nineteenth-century still-life paintings as a quintessential American fruit. In fact, the watermelon probably originated in Africa. 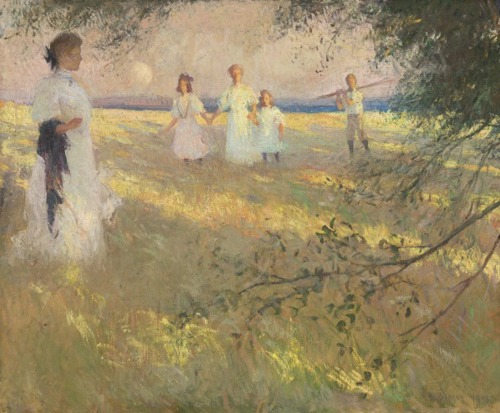 Frank Benson frequently used his family as models, especially during the summer months on North Haven Island, Maine. Here his oldest child, Eleanor, in the foreground, meets her sisters and brother as they return from an afternoon’s fishing with their mother. Benson emphasized the evening sunlight cutting through the shadowy trees and reflecting off the brilliant white clothing as his family traverses a meadow. As one of his daughters remembered, “Papa would often have us put on our best white dresses and then ask us to sit in the grass or play in the woods. We thought it was so silly, and the maids made such a fuss when they saw the clothes afterwards.”

Listen to a museum staff member discuss Benson’s work in this CAM Look episode published on May, 20, 2021. 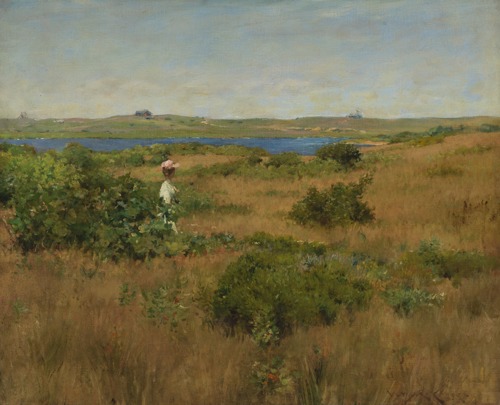 In 1891 William Merritt Chase opened a summer school for outdoor painting at Shinnecock Hills, near the village of Southampton on southeastern Long Island. With the possible exception of a class taught by John H. Twachtman, this was the first instruction in the United States devoted to outdoor painting. Summer at Shinnecock Hills is among the earliest of the artist’s signature portrayals of the region. With some variations, these works typically include women and children in sparkling white dresses accented with touches of pink or red, on the beach or nestled within the wind-swept grasses of the dunes. The clear vistas unobstructed by trees, the gently rolling contours of the terrain, and the colors of the landscape provided Chase with a wealth of inspiration that was renewed each summer. 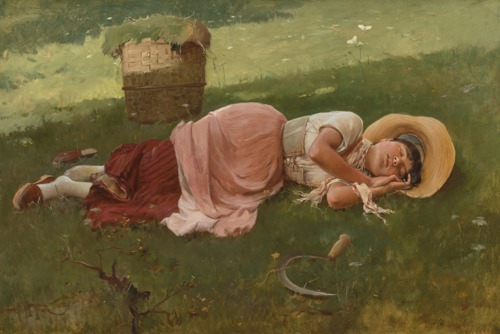 A young contadina (Italian countrywoman) has set aside her workbasket and sickle to nap in a shady spot. Succumbing to her exhaustion, her hat falls off and her shoe lies discarded in the grass. These storytelling elements distinguish this work from Duveneck’s earlier efforts, as does the style of figure, painted with a new reserve and delicate precision. The background, however, is more adventurous and reveals the artist’s customary touch. With no horizon line and few details to anchor the body in space, the woman and her basket seem to hover in front of independent bands of color and lively strokes of paint.

This sensual work was one of several the artist made in 1886 and 1887 to partake in a vogue among artists and collectors for rustic European subjects. The single pleasures and concerns expressed in such paintings promised release from the stresses of the modern industrial, urban world.

Frederick Frieseke | Under the Willows 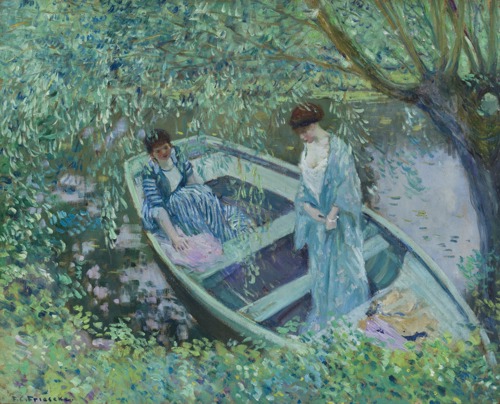 The kimono-inspired robe worn by the woman in the foreground reflects the strong appeal of all things Japanese around the turn of the twentieth century. The painter Frederick Frieseke, a Michigan native who spent much of his career working in France, portrays the boat looking down from above, a perspective favored by several of the Impressionists that they derived from the study of Japanese prints. Although the woman are ostensibly on an outing, the painting has a pervasive stillness and contemplative mood; the figures are beautiful ornaments in a decorative world. The lush garden setting appears as a tapestry of brushstrokes, predominantly in cool hues of blue, turquoise and violet. 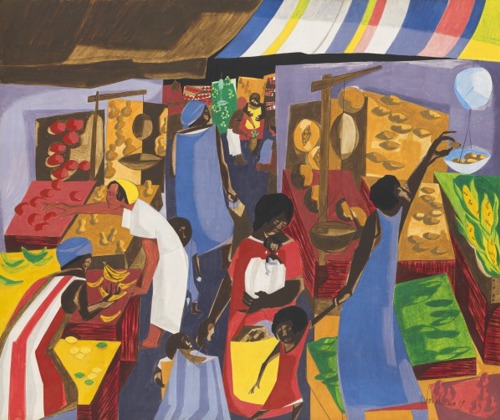 Although narrative series such as The Migration of the Negro earned Jacob Lawrence early fame and success, scenes such as this one depicting daily life in an African American community were a recurring subject throughout his long career. Born in Atlantic City, Lawrence was raised and trained in Harlem, where he began to develop his signature style at an early age. Working in what he referred to as “Dynamic Cubism,” Lawrence melded the fracturing of space he found in early twentieth-century Cubism with a vivid, patterned use of color that recalls traditional African textiles. In this painting, Lawrence used color and pattern to activate his composition: the striped awning at the upper right is echoed by the woman’s dress at the lower left. Repeated colors and shapes of the fruit in stands punctuate the image and flatten the space. Lawrence’s characteristic enlargement of heads and hands guides the viewer’s eye and emphasizes the movement and rhythm of the scene. In Fruits and Vegetables, Lawrence straddled the line between abstraction and representation: the action takes place in a believable space created by effective layering of elements, yet the painting is simultaneously a virtuoso display of flat color and pattern.

Listen to a museum staff member discuss Lawrence’s work in this CAM Look episode published on May, 12, 2020.

Frank Harmon Myers | In the Park 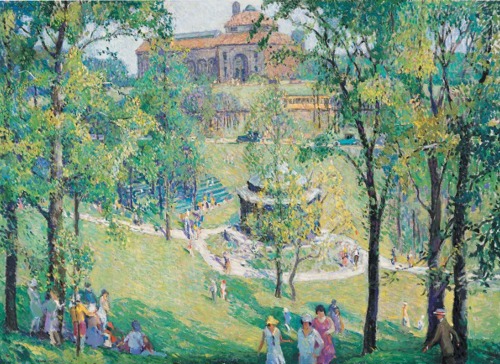 In the Park shows the Cincinnati Art Museum before the addition of the Adams Emery Wing in 1965 concealed the asymmetrical Romanesque Revival façade designed by architect James McLaughlin. Note the yellow street car that dropped visitors right by the front entrance, denoted by an impressive archway. The bandstand in the painting’s foreground was a popular gathering spot in Eden Park on the grounds of the current Seasongood Pavilion.

“Decorative” and taspestry-like” were terms a critic aptly used in 1927 to describe this vivid, cheerful park scene. In 1972, Alice Palo Hook, the museum’s librarian, purchased the painting to make the former library reading room “more attractive.” Frank Myers’ delighted widow told Hook that her husband’s “love for the Cincinnati Art Academy and Museum was of such depth and duration that I know it nearly tore him apart to leave [for California].” 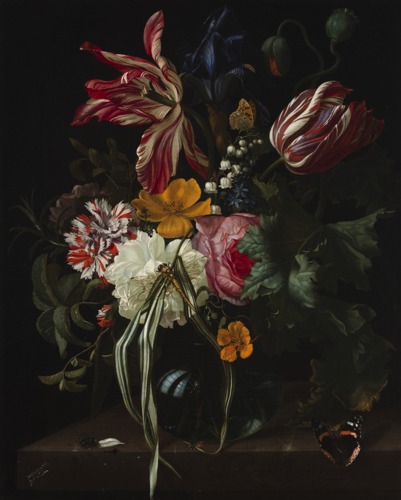 Many of the floral still lifes painted in the Netherlands in the seventeenth century are a compendium of rare and exotic specimens. Artists used real flowers as models, but the bouquet itself was completely imaginary, since the various flowers bloomed at different times of the year.

Two beautifully flamed tulips are featured prominently in Maria van Oosterwijck’s Flower Still Life. Tulips were introduced to the Netherlands just before 1600 and rapidly became the flower most coveted by gardeners and collectors. Unusually patterned examples like those depicted here were especially prized and the bulbs could command remarkable prices.

In addition to recording unusual and beautiful botanical specimens, flower still lifes sometimes carried a symbolic meaning. The ephemerality of blossoms made them an obvious metaphor for the transitory nature of human life. The insects were also significant: the fly could symbolize decay, and the butterfly, resurrection of the fragility of life.

Listen to a museum staff member discuss van Oosterwijck’s work in this CAM Look episode published on May 7, 2020. 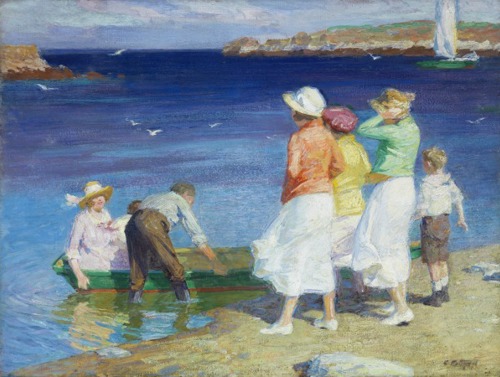 Edward Henry Potthast captured the playful spirit of the Roaring Twenties in A Sailing Party. A mixed group of smartly dressed vacationers sets out for an excursion on the water, a stiff breeze flapping their clothing. As in a snapshot, you see most of the figures from behind, their expressive poses suggesting a story. During this era, Potthast intensified his colors. Here he juxtaposed the brilliant blues and purples of the ocean with the bright and varied hues of the woman’s tops and their sun-bleached white skirts.

From Over-the-Rhine, Potthast was among the painters who got their start in the Queen City but were lured away by the greater opportunities for exhibition and sale on the East Coast. He rekindled friendships with former Cincinnati colleagues during summer jaunts to New England.