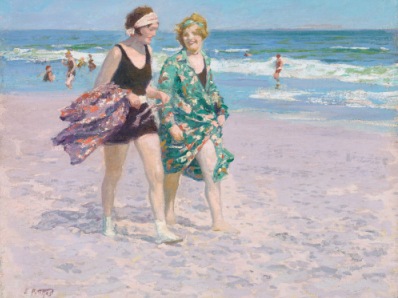 Now that the heat and humidity of the Cincinnati summer has settled in, take time to come in out of the heat to enjoy our latest exhibition, Eternal Summer: The Art of Edward Henry Potthast. While Potthast painted a wide variety of subjects, he is best known for his beach scenes and many are featured in this comprehensive look at his work. You might be intrigued by the fact that we have taken the exploration of the artist’s work a step further by displaying examples of period swimwear alongside his paintings. Featured are four examples of swimming attire that date from about 1915 to the late 1920s.

You might be surprised by this navy blue 1915 example that looks more like a dress than a bathing suit. In the 19th and early 20th century, women were not swimming aerobically. Wading and playing in the water was more their speed and modesty was particularly important. Dark tights and bathing shoes accessorize a knee length dress with bloomers underneath. Having a suntan was frowned upon. A bright scarf tied around the head, hiding a practical rubber cap to keep the hair dry is the only bit of color. Hardly the revealing bikini of today!

The navy 1915 example is made of cotton, but the new styles coming into vogue at this time, like this green example, were knit wool. Sounds scratchy! But wool was practical because the natural lanolin in the fiber shed the water and the material was very opaque. These body-hugging suits were amazingly revealing. By 1920 you could see a woman’s bare legs and arms and all of her curves on the beach.

This was the new woman of the early 20th century who was more educated, marching in the streets to win the right to vote, and fraternizing with men on the beach . . . . . without a chaperone. Check out Potthast’s Couple on the Beach (below) and Blonde and Brunette(cover image above) to see this more independent woman on the move.

You will never think about your modern swimsuit the same after you experience Eternal Summer. Don’t miss it!

Love fashion arts & textiles? Explore more of our collection online or become a Friend of Fashion.