The Etching Revival: From Daubigny to Twachtman 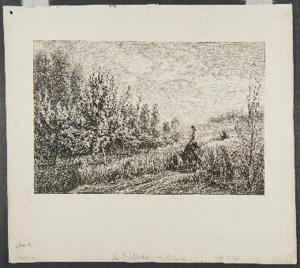 Do you know what artists were excited about at the time that the Cincinnati Art Museum was incorporated?  Take a trip back to the early days of the Art Museum in the exhibition The Etching Revival: From Daubigny to Twachtman through May 8th.  The painter-etchers, as they called themselves, found freedom and spontaneity in etching, as opposed to reproductive printmaking and the authoritarian values of the Academy.  The revival swept three nations.  Beginning in France and England in the 1850s, it gained momentum in America with the 1876 Centennial Exposition in Philadelphia and the establishment of the New York Etching Club in 1877.  The second etching club in America was established in Cincinnati and included participants Henry Farny, Mary Louise McLaughlin, Henry Potthast and Lewis Henry Meakin.

The exhibition features the first prints by J. M. W. Turner exhibited by the early formed Art Museum.  The etching revival coincided with the groundswell of Cincinnatians who supported the establishment of the Cincinnati Art Museum in 1881 which is reflect by early gifts and new acquisitions to the permanent collection.  This exhibition was organized in conjunction with the Taft Museum of Art’s exhibition Daubigny, Monet, Van Gogh: Impressions of Landscape through May 29th.