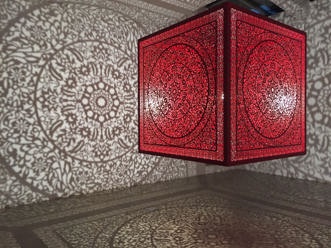 CINCINNATI— Pakistani-American artist Anila Quayyum Agha has been named the recipient of Cincinnati Art Museum’s 2017 Schiele Prize. This prize honors the legacy of Marjorie Schiele, a Cincinnati artist whose generous bequest of the Hanke-Schiele Fund makes this award possible.

Agha’s All the Flowers are for Me (Red) is the first purchase with the museum’s new Alice Bimel Endowment for Asian Art.

The museum’s recent acquisition is a five-foot laser-cut steel cube displayed suspended from the ceiling and lit from within. Light emanates from the red lacquered cube, enveloping the gallery in intricate shadows that ripple and change as visitors move through the space.

Inspired by Islamic architectural forms, the geometric and floral patterns cast upon the walls, floor and ceiling create an immersive experience.

“Anila Quayyum Agha’s artworks create interactive environments imbued with beauty and textured meaning. Her works are both contemplative and exhilarating to behold,” said Ainsley Cameron, Cincinnati Art Museum’s new Curator of South Asian Art, Islamic Art & Antiquities. “All the Flowers are for Me (Red) reflects the museum’s mission to support our community by inviting all people to come together and participate in this shared gallery experience.”

Cameron Kitchin, the Cincinnati Art Museum Louis and Louise Dieterle Nippert Director, said: “We are honored to present Anila Agha the Schiele Prize for her dedication to creating culturally-relevant, conversation-starting art. The Hanke-Schiele Fund has allowed us to give special recognition to one of the most captivating working artists today. In addition, through the generosity of the Bimel family, we have the privilege of adding this visually stunning work to our permanent collection and displaying it for the entire community to view.”

Agha’s light-based installations have been exhibited nationally and internationally in more than 20 solo shows and 50 group shows. She currently resides and works out of Indianapolis.

Born in Pakistan in 1965, Agha moved to the United States in 1999 and, in 2004, completed her MFA in fiber arts at the University of North Texas. In 2008, she moved to Indianapolis to take up a professorship at the Herron School of Art & Design/ IUPUI.

Agha began experimenting with large-scale installation works in 2010, and in 2012 received a New Frontiers Research and Travel Grant from Indiana University. Her travels inspired a profound shift in her artistic practice. In 2013, Agha created Intersections—her first laser-cut steel work—to explore the design of the Alhambra Palace through abstraction and transmitted light. Intersections was awarded the Public Vote Grand Prize and split the Juried Grand Prize at the 2014 ArtPrize competition in Grand Rapids, MI.

Cincinnati Art Museum’s exhibition Anila Quayyum Agha: All the Flowers are for Me will also include a selection of Agha’s drawings that complement her lighted artwork. The exhibition will premiere at the museum’s ticketed fundraising event A Taste of Duveneck Presents the Art of Wine on June 16. The exhibition is free to the public from June 17–October 15. Photography is encouraged. On social media use #anilaincincy #anilaquayyumagha.

The museum will celebrate the exhibition’s final days during Cincinnati’s BLINK celebration, an experience of light, street art, murals and live performance spread across 20 blocks of downtown Cincinnati from the Banks to Findlay Market, October 12–15.