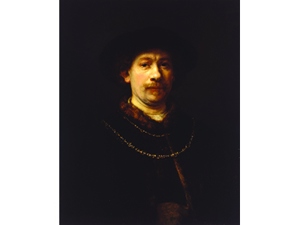 Rembrandt presents himself to the world as a young man, a self-made burgher and an old master painter this spring at the Cincinnati Art Museum. Three extraordinary self-portraits by Rembrandt van Rijn, one of the greatest masters in the history of Western art, will be presented together for the first time at the Cincinnati Art Museum from March 8 to May 21, 2008. Rembrandt: Three Faces of the Master will feature three landmark paintings on loan from the Louvre Museum in Paris, the Thyssen-Bornemisza Museum in Madrid and the Indianapolis Museum of Art. The Louvre’s masterpiece painting will travel to the U.S. for the first time for this exclusive showing in Cincinnati.

Together, the three paintings will allow visitors to intimately view Rembrandt during three distinct life junctures, getting to know him as both man and artist through his self-portraits.

“Rembrandt’s self-portraits are a window into his identity and personal history. While the paintings are records of different stages of his life as an artist, Rembrandt is role-playing as both artist and subject,” said Dr. Benedict Leca, curator of European painting and sculpture. “The Louvre’s self portrait in particular is the first in which Rembrandt chose to affirm himself as an artist. Visitors will now have a rare opportunity to see this international masterpiece up close in their community museum along with two other very highly regarded self-portraits.”

As the first of the three self-portraits seen in the sequence of the exhibition, the Indianapolis Museum of Art’s Self Portrait with Gorget and Beret (c. 1629) depicts Rembrandt as a young artist on the make. This painting presents an outstanding example of Rembrandt’s incredible skill in the manipulation of light and shade, and in the handling of subtle color effects and textures.

Self Portrait with Beret and Two Gold Chains (c. 1642-1643), on loan from the Thyssen-Bornemisza in Madrid, shows Rembrandt during his middle-aged years as a well-to-do burgher. Rembrandt presents himself as a citizen much like the Dutch merchant class that patronized him.

“This middle-aged self-portrait reminds visitors that although such self-depictions might have reflected Rembrandt’s actual station, they also represented his social aspirations and thus involved a certain amount of role-playing,” said Dr. Leca. “After seeing these works, which show Rembrandt as a young man, a middle aged bourgeois and a professional artist, visitors will feel as if they’ve traveled through time with Rembrandt—peering at the artist through the various stages of his life and through the multiple guises he adopted.”

The third self-portrait seen in the exhibition, Self Portrait of the artist at the Easel (c. 1660), on loan from the Louvre Museum in Paris, marks the capstone of this exhibition. This painting has been recognized as one in which Rembrandt, for the first time, presents himself as mature professional —the aged, experienced master taking pride in his craft. In 1671, it was acquired by the King of France, Louis XIV.

“These are paintings that at one level chronicle Rembrandt’s life story, and at another make a statement about the instability of one’s identity,” said Dr. Leca.

The exhibition will also include a selection of Rembrandt’s self-portrait prints from the Art Museum’s permanent collection.

Tickets are required for Rembrandt: Three Faces of the Master; $5 for individuals 6 years and older; free for children 5 and under; free for Cincinnati Art Museum members. Tickets go on sale Jan. 7, 2008; purchase tickets at www.cincinnatiartmuseum.org or (513) 721-ARTS.