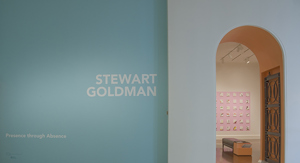 The Cincinnati Art Museum will present a special exhibition showcasing one of Cincinnati’s most beloved local artists and community educators, Stewart Goldman, in Stewart Goldman: Presence through Absence. The exhibition provides a glimpse into Goldman’s artistic development over the course of his career, from 1971 to the present, and traces his trajectory from figurative painting to abstraction through the presentation of fourteen works. The exhibition will be on view February 28 through May 10, 2009.

Like many artists who studied during the 1950s, Goldman rebelled against the prevalent style of abstraction and concentrated on figurative painting. Images of hauntingly empty rooms with only the suggestion of human figures developed into focused studies of vacant spaces. His illustrations for Dr. Anna Ornstein’s My Mother’s Eyes: Holocaust Memories of a Young Girl further developed this type of imagery.

Travel was often a catalyst for critical shifts in Goldman’s work; while sketching landscapes in Germany, he began to draw the space around objects, rather than the objects themselves. The resulting luminous, vibrant images were more abstract, a direction that Goldman embraced. He now works strictly in that style, employing a methodical approach.

Visitors to Stewart Goldman: Presence through Absence will get a rare opportunity to view this local favorite’s artistic progression. Artworks created throughout his career contain an overwhelming sense of absence and emptiness, which itself speaks volumes from setting a mood to defining form.

“Goldman’s work explores consistent themes yet covers a range of styles as he developed as an artist,” said Flores. “By examining his artistic growth, we can also reflect on our own relationships with art, as individuals and as a community.”