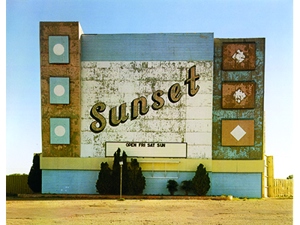 Garish, pedestrian and commercial - that’s how critics characterized color photography in the 1970s. It was in fact an explosion of color and the beginning of a new form of art.

Starburst: Color Photography in America, 1970-1980 is the first survey of a burgeoning period in photography. Through the work of artists such as William Eggleston, Stephen Shore and Mitch Epstein, conventions of the snapshot are turned into high art.

Starburst offers the first historical survey of what critics of the 1970s called “The New Color Photography,” a loose artistic movement that generated much controversy and excitement in a multitude of exhibitions and publications throughout the decade. Addressing various themes, such as the technological factors contributing to color’s emergence, cultural biases against color photography’s use as an art form, and shifting attitudes between formalist and conceptual practices, the exhibition explores color’s role in the transition between modern and contemporary approaches to art photography during the 1970s.

Starburst: Color Photography in America 1970-1980 is accompanied by a full color catalogue published by by Hatje Cantz and distributed by DAP/Distributed Art Publishers and including texts by Kevin Moore, James Crump and Leo Rubinfien. The catalogue will be released in conjunction with the opening of the exhibition in Cincinnati and can be purchased ($70) at the Cincinnati Art Museum Shop or by calling (513) 639-2959.