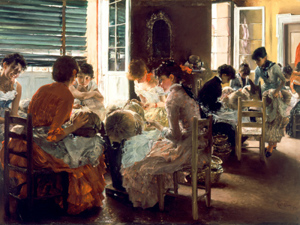 Impressions of Venice will exemplify beautiful Venice, the most depicted city in the·world by 1900, and demonstrate how it influenced Cincinnati, its art and artists. Works on view will date from the late 1870s to about 1920, with most pieces coming from the 1880s, and all from the Cincinnati Art Museum’s permanent collections. Venetian lace and glass collected by the Art Museum in the 1880s will combine with examples of scenic photography, a vase and plaque decorated by Carl Schmidt for The Rookwood Pottery’s Venetian Vellum line, along with critic John Ruskin’s landmark book The Stones of Venice (1851-53), and an etched copper plate shown in tandem with Frank Duveneck’s etching tools. Paintings and prints will be represented by Robert Blum, Frank Duveneck, Joseph DeCamp, John Twachtman, and Cincinnati’s seminal Venetian influence James Abbott McNeill Whistler.