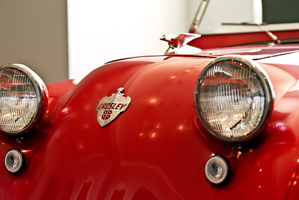 Cincinnati entrepreneur Powel Crosley (1886–1961) held the democratic vision of creating products affordable to the masses. He is well remembered for his inexpensive and well-engineered radios and appliances, the establishment of the WLW radio station, and his one-time ownership of the Cincinnati Reds baseball team. At the age of 12, he created his first working automobile, and his dream to manufacture affordable and reliable cars was born. He launched his first commercially-available automobile at the New York World’s Fair in 1939. The small three-seater—America’s first compact car—retailed for about $350. After World War II, Crosley developed several different models, all “designed to sell cheaply like Crosley radios and refrigerators and run economically like the Cincinnati Reds.”

The Super Sport was introduced in February 1950 at the New York Sportsman’s Show with leopard skin seats. It went into production (without the leopard skin) a month later. It was envisioned as the super edition of Crosley’s Hot Shot, America’s first mass-produced sports car, introduced in 1949. The loping lines of the Hot Shot and the Super Sport’s bodies are identical. The most obvious difference between the two cars is that the Super Sport includes hinged doors, whereas the Hot Shot is door-less. Despite its stream-lined, race car-inspired looks and economical approach, the Super Sport did not find favor with post-war consumers who gravitated toward the hulking, gas guzzling models that became the American classics of the 1950s. Crosley was too far ahead of his time.