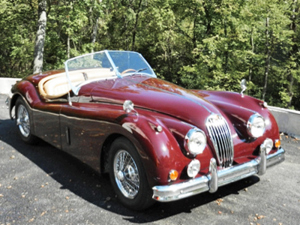 Low slung. Long, rolling lines. Luxury. Designer William Lyons conceived Jaguar’s XK series as a sleek, sexy, powerful line of two-seat roadsters. The XK140 introduced at London’s 1954 Motor Show was the successor model to the popular XK120, introduced in 1948.  While the XK140, maintains the sleek, flowing lines of its predecessor, most of the engineering changes increased the performance and handling of the vehicle.  Outwardly, the bumpers became more substantial for real world living, and a chrome stripe, running down the center of the car from bonnet to boot, visually elongated the car’s refined profile.  Aimed at the American market, the car’s interior was trimmed in leather and many alterations where made to increase the overall size and comfort of the driver’s compartment. The light canvas top folds out of sight behind the seats, and instead of windows removable side curtains are used, both tell-tail signs of classic roadster design styling.