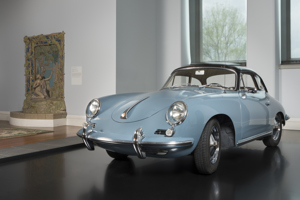 Porsche’s 356 series, so-named because it was the company’s 356th project, was produced between 1948 and 1965. The 356 is considered to be Porsche’s first production car, and the car that laid the framework for the company’s future success. It was prized for its high quality, light weight and excellent aerodynamics. Fanatical trial and error carried out by designers for the best aerodynamics led to the car’s sexy, streamlined shape. This example is one of the few “notchback” 356B hardtops produced in 1961 and 1962. “Notchback” refers to the silhouette of the car. Compared with earlier versions, the angle of the rear window is more perpendicular to, rather than horizontal with the car’s roof line.

This Porsche 356B is on loan, courtesy of Robert L. Greiwe, owner. It is the 19th car that has been on view since the Cincinnati Art Museum began celebrating artful design in automobiles.