The exhibition was organized by the Metropolitan Museum of Art, New York. 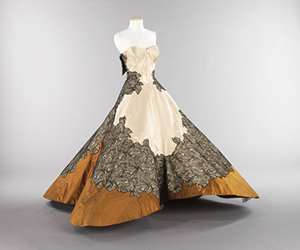 High Style traces the evolution of fashion from 1900 through 1980 with garments and accessories by the most influential European and American designers of the 20th century, including Schiaparelli, Chanel, Dior, Givenchy, Norell, Scaasi, and Charles James, among others.