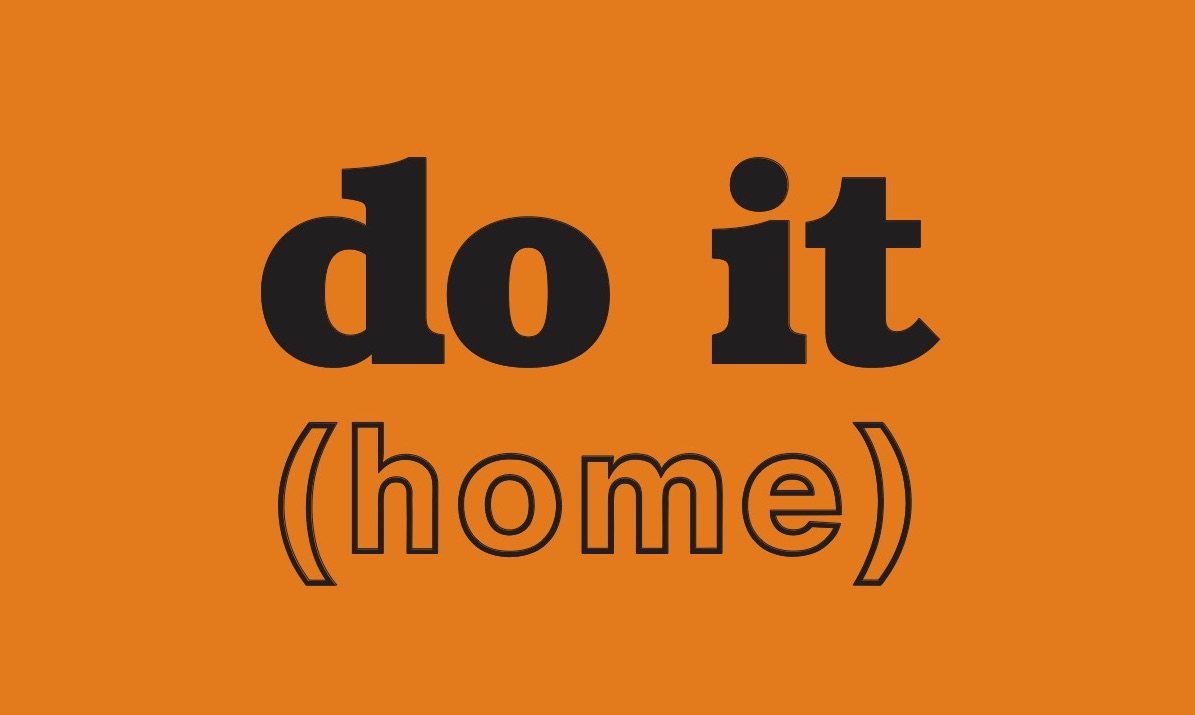 As many of us across the globe are experiencing social distancing and orders to stay at home, the Cincinnati Art Museum is joining Independent Curators International (ICI) and over 30 art spaces around the world in sharing do it (home). This interactive exhibition, curated by Hans Ulrich Obrist, provides a set of art-making prompts that can easily be brought to life in your own home. These instructions have been created by contemporary artists, including some who are represented in our permanent collection. According to Obrist, “do it has always been global and local, public and private — spheres of life that for many have coalesced in recent months.” do it (home) will take you away from your screens, and recreate an art experience at home.

You are invited to be an active participant by responding to the artists’ prompts, following their lead, and realizing an artwork on their behalf. Some artists will guide you in creating a physical work of art, while others encourage you to reflect on the world around you. When you are ready, share your creation online and make connections with other doers using #doithomeCAM or by sharing on our website using the form below. Artist prompts are available in both English and Spanish.

do it (home) PART 1 instructions

do it (home) PART 2 instructions

do it (home) is curated by Hans Ulrich Obrist and produced by Independent Curators International (ICI), New York. do it (home) is made available to art spaces internationally free of charge, in response to the COVID-19 crisis, with the support of ICI’s Board of Trustees, contributors to ICI’s Access Fund, and the Jeanne and Dennis Masel Foundation.

In 1993, Hans Ulrich Obrist together with artists Christian Boltanski and Bertrand Lavier, conceived do it, an exhibition based entirely on artists’ instructions, which could be followed to create temporary art works for the duration of a show. do it has challenged traditional exhibition formats, questioned authorship, and championed art’s ability to exist beyond a single gallery space. Since do it began, many new versions have appeared, including do it (museum), do it (tv), and do it (in school). Over time, do it has grown from 12 to over 400 sets of artists’ instructions, and has been shown in more than 150 art spaces in over 15 countries.

Scroll through a selection of CAM objects that relate to prompts by do it (home) artists and reflect on them as you create your own art.

Note: please leave your mouse pointer hovering on the image to keep the carousel from advancing to the next slide. 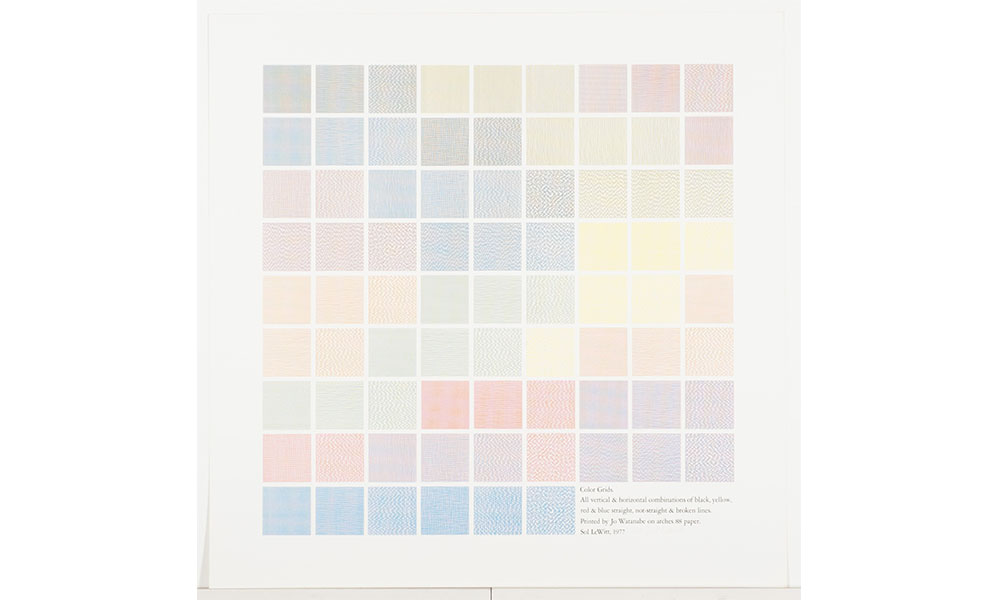 Art can be a way to visually depict the world around us, but it can also represent the unseen or abstract thought. This is known as conceptual art. Many of the prompts in do it (home) fall into this category and the Cincinnati Art Museum's collection holds many examples. This print by Sol LeWitt has the instructions in the title. What you see is the result of that idea. Compare this to your Etel Adnan-inspired art-making process. What is similar? What is different? 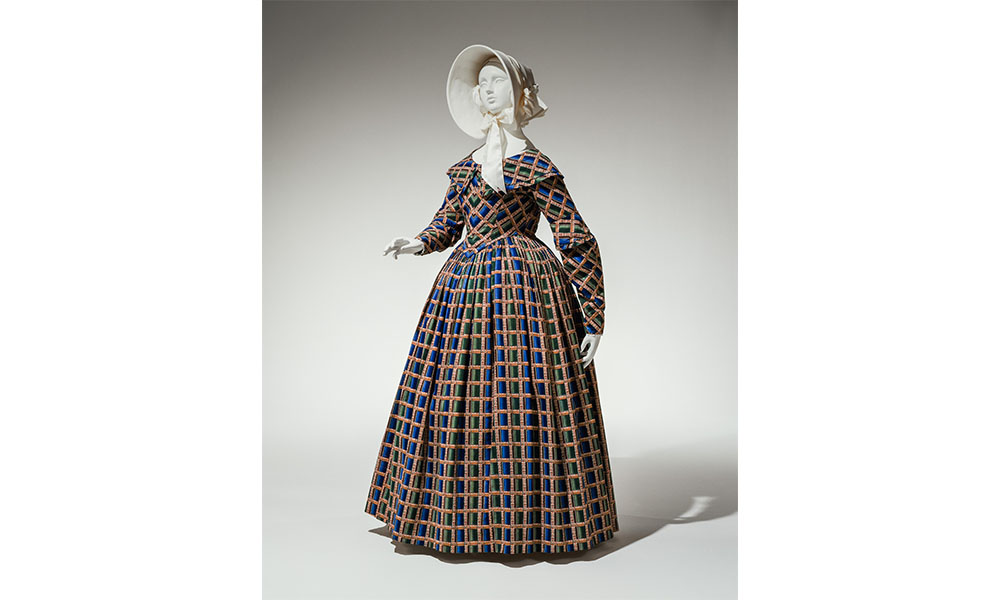 Two-dimensional art can come to life when placed on a three-dimensional form. Vibrant patterned fabrics were particularly popular for women’s clothing of the 1830s through the mid-nineteenth century, such as the ombré grid pattern on this 1840s dress, reminiscent of Etel Adnan’s grid-making prompt. What can you turn your rainbow pattern into?

Greta Bratescu's prompt is a reflection on the world around her as she imagines her studio as a collection of lines and dots. Similarly, Joan Miró's mural for the Terrace Plaza Hotel in Cincinnati, now across from the Terrace Café at the Cincinnati Art Museum, was created to immerse viewers in space through lines, shapes, and color. Follow Bratescu's prompt to recreate your surroundings as lines and dots. 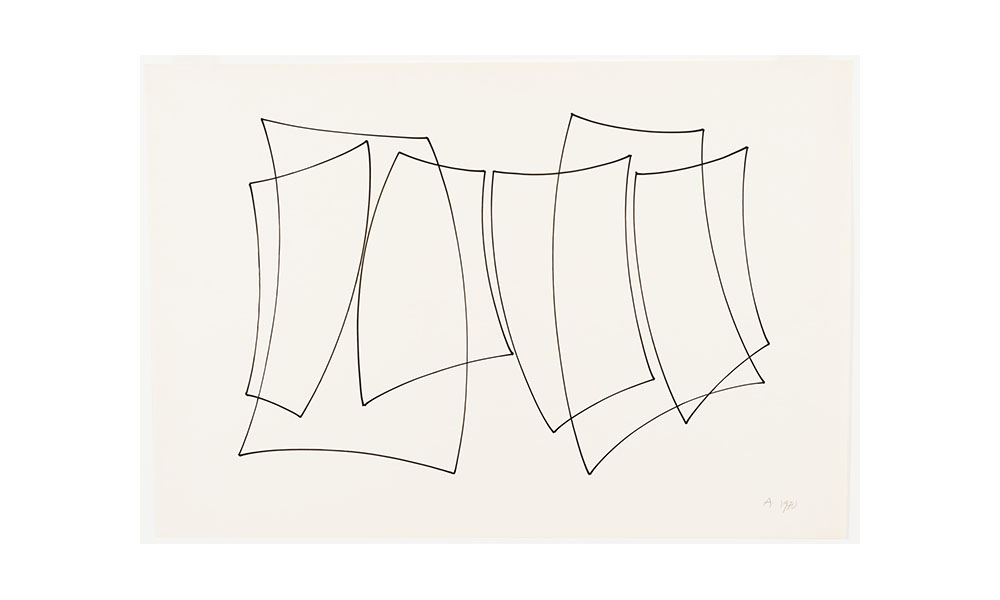 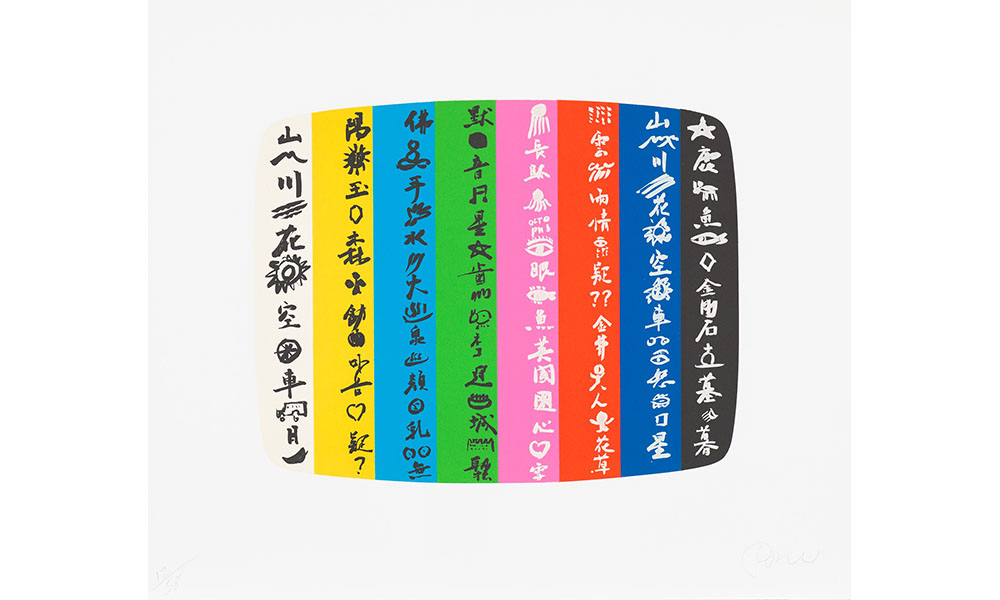 The original Rosetta Stone was the key to translating ancient Egyptian hieroglyphics into modern languages. Nam June Paik’s Rosetta Stone calls to mind this idea as we view our televisions. Modern media has created its own language with images instead of words. The Critical Art Ensemble’s third project asks you to distort the color settings on a TV and take a photo of it. What does your image communicate? 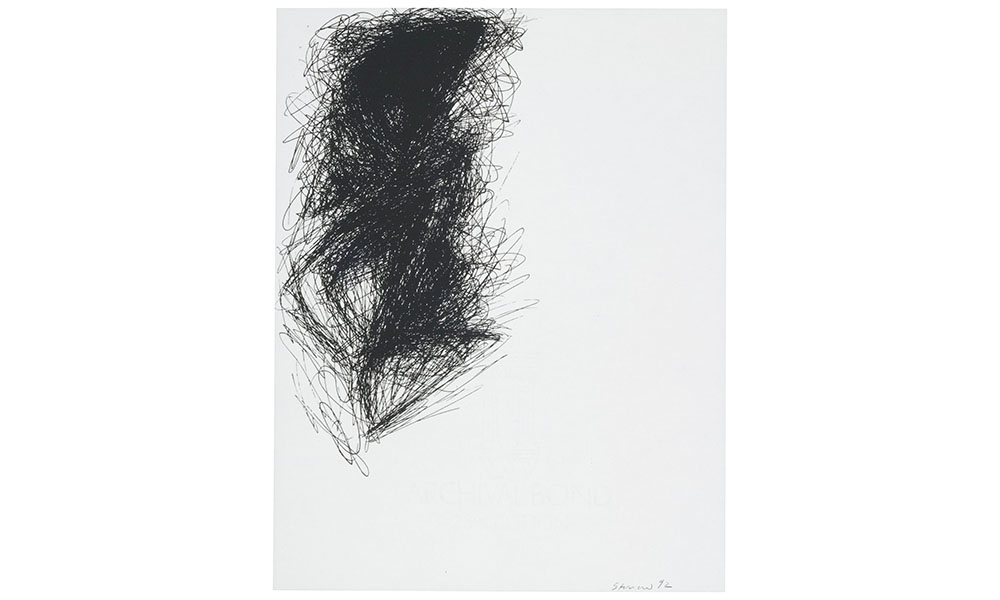 Sometimes, it's more satisfying to scribble than to draw something specific. Your hand may be guided by your feelings rather than by intent. Try Torkwase Dyson’s 99-second drawing. How do you feel while you are making your art? 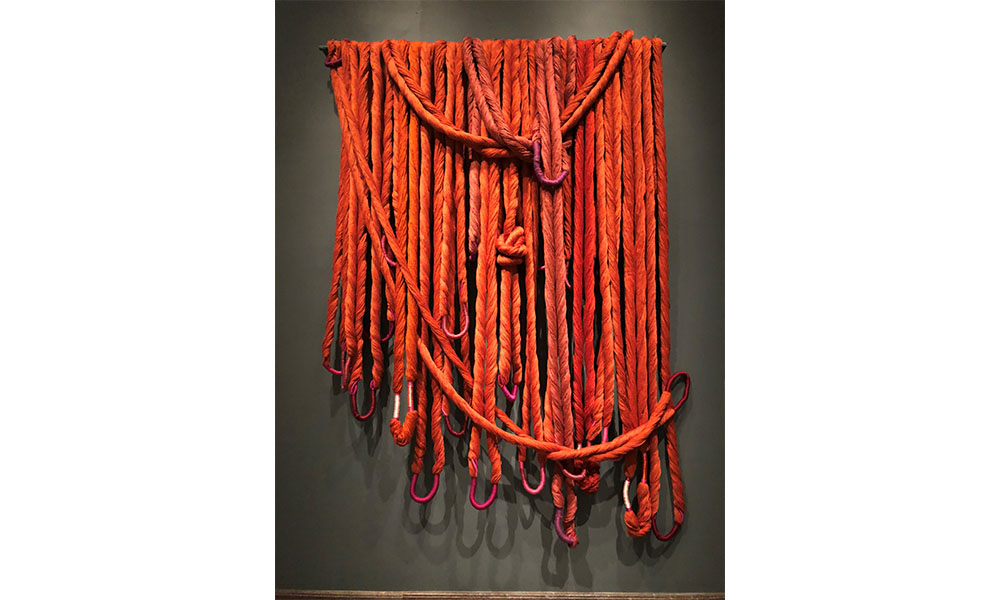 Sheila Hicks's Untitled Tapestry is made up of a series of yarn loops that can be arranged in an infinite number of ways. Bundles can hang straight down or be draped over, under, and through other loops. Heights can be changed and varied to create different compositions. Just as your eyes follow the twists and turns of Hicks’s tapestry, follow the movement of your own Tracey Emin-inspired web. What does it feel like to move in and around your artwork? 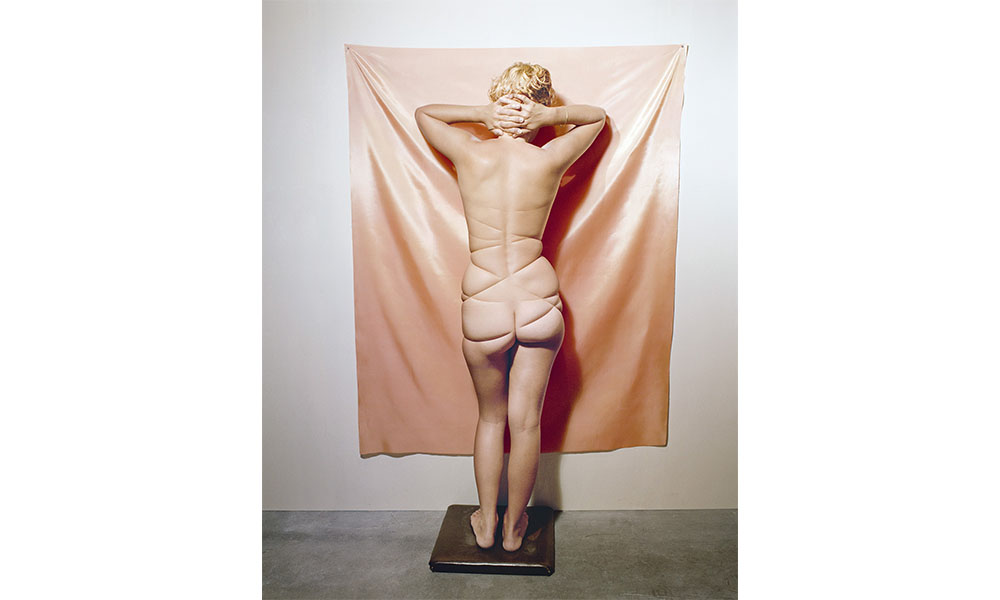 Tracey Emin asks you to wrap red string around a spread of twenty-seven bottles, creating a web-like structure. In Jo Ann Callis’s Nude Facing Wall, a live model is tightly wrapped in string, making a statement about the relationship between the female form and power. What does this mean to you? Now, look at and reflect on your own web. Does it signify anything to you? 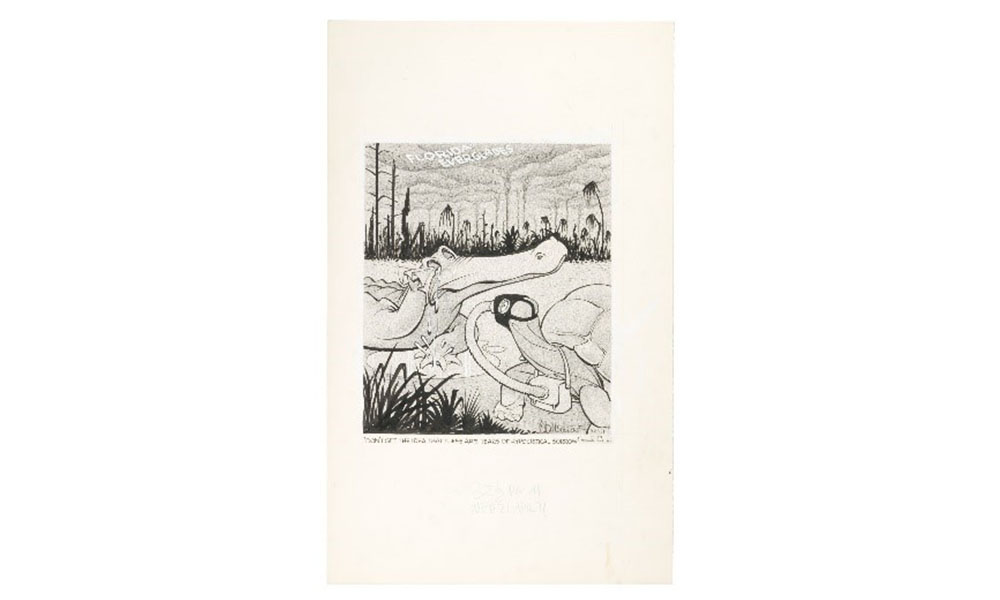 The COVID-19 pandemic has brought the use of protective face coverings to the forefront of our minds. Masks vary depending on their function, and include respirators, gas masks, and full face shields. Many of us have had to think outside the box to create our own homemade masks. Simone Forti suggests using culottes. While most English-speakers think of culottes as short, flowing trousers, the term in French actually refers to panties. What else could you use as a mask? 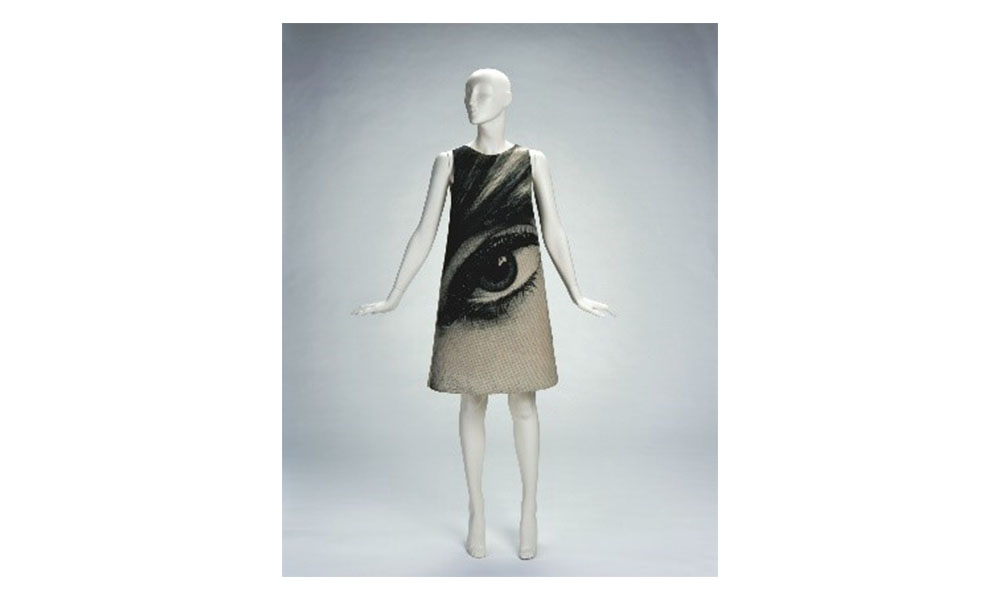 Paper dresses were a short-lived fad during the late 1960s. They were inexpensive and disposable, which made them an ideal canvas for fun imagery, such as this example with an oversized close-up of a model’s eye. Similarly, T-shirts have been a mainstay for many to communicate their interests and views. And now masks are another expressive garment. What does your mask convey about yourself? 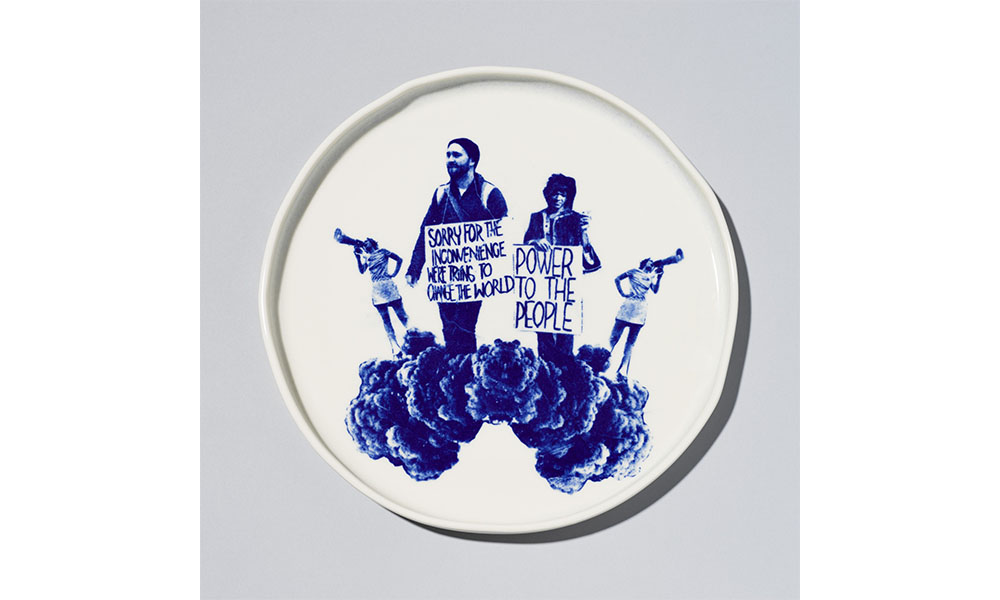 Artist and activist Lucy R. Lippard asks us to step outside of traditional art spaces and do something relevant and radical. Terence Hammonds’ Protest Platter places scenes of historical protest onto a functional serving dish. According to Hammonds, “I like to think of the platters as maybe having the reverse function of a ‘mammy jar.’ Whereas ‘mammy jars’ would reiterate racist stereotypes in subtle innocuous ways, I wanted the platters to remind us of the social struggles and the people who fought for change, and [who] empower us to keep up that fight in our daily lives.” How will you respond to Lippard’s call to change the world? 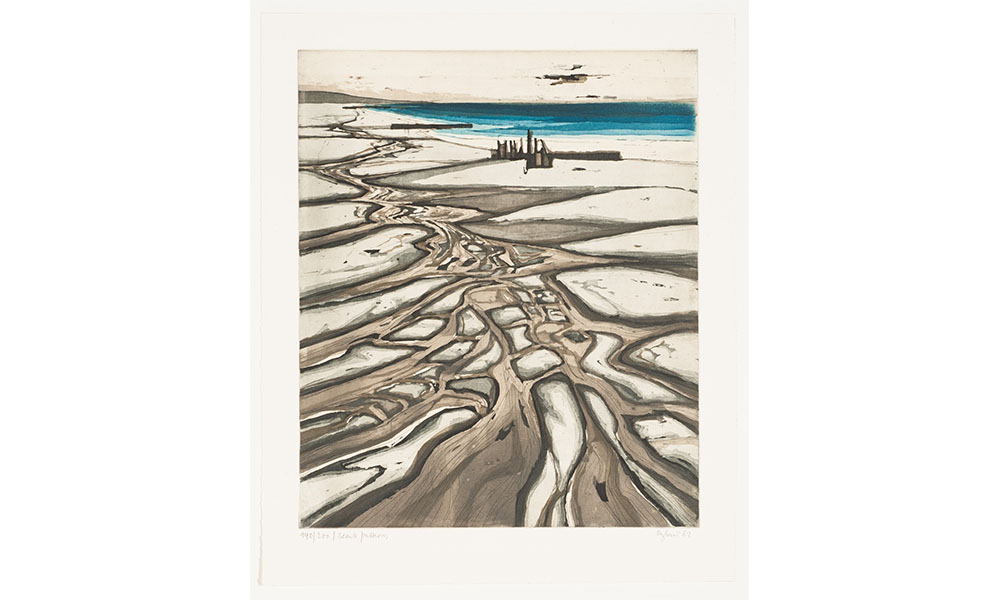 Nature is a powerful force. Water can carve through rocks and forge new pathways. Wind can shift deserts and beaches into dunes and valleys. The beauty of these processes can be seen in Otto Eglau’s Beach Patterns. David Meireles wants you to shape the sand by digging a hole and silently reflect as you witness nature changing your creation. What do you feel as you watch the water and wind reshape the hole you dug? 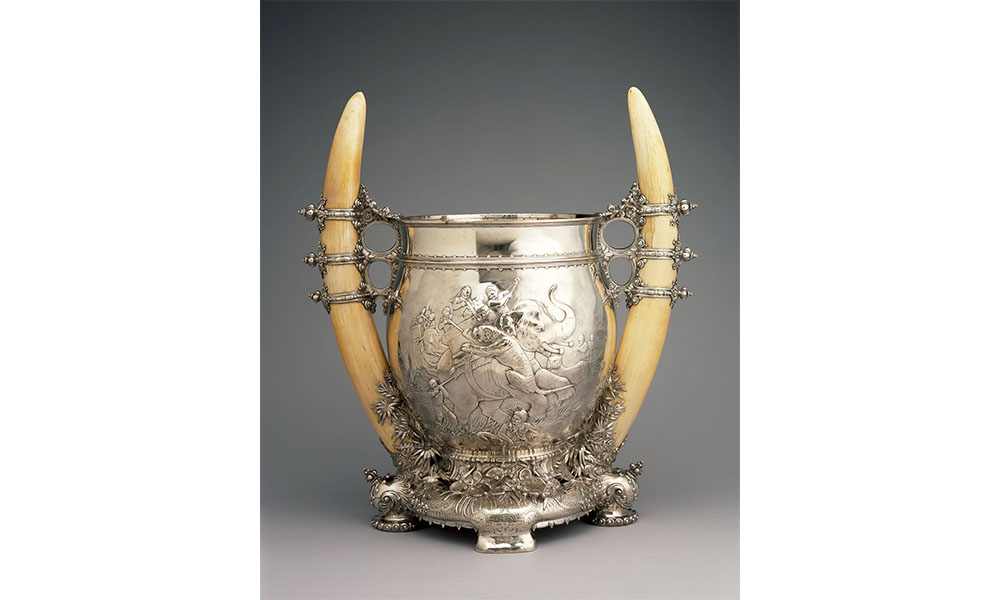 Throughout history and amongst many diverse cultures, silver has been seen as having mystical properties. This silver loving cup made by Tiffany & Co. seems a fitting vessel to drink from after Cildo Meireles’s suggested twelve-hour fast. What would you drink from? 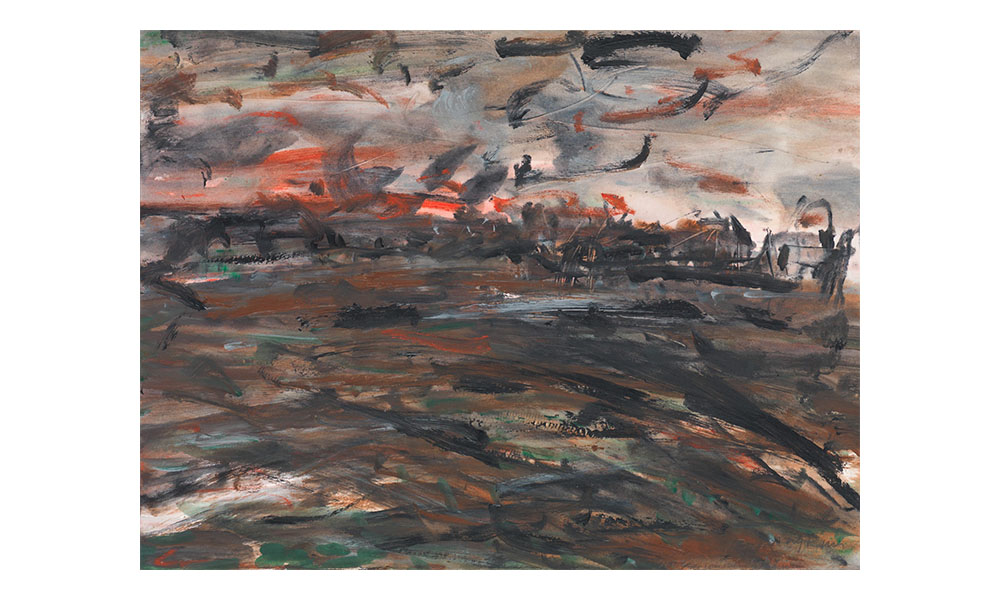 Albert Oehlen’s Instructions To Make A Good Painting begin with two methodical steps: arrange your paint tubes and brushes in a logical way. Then he subverts the process by having you flip your canvas upside down and paint without thinking. You are then invited to step back, reflect on what you like, and cover up what you do not like, repeating until you have “the greatest painting that ever has been painted.” 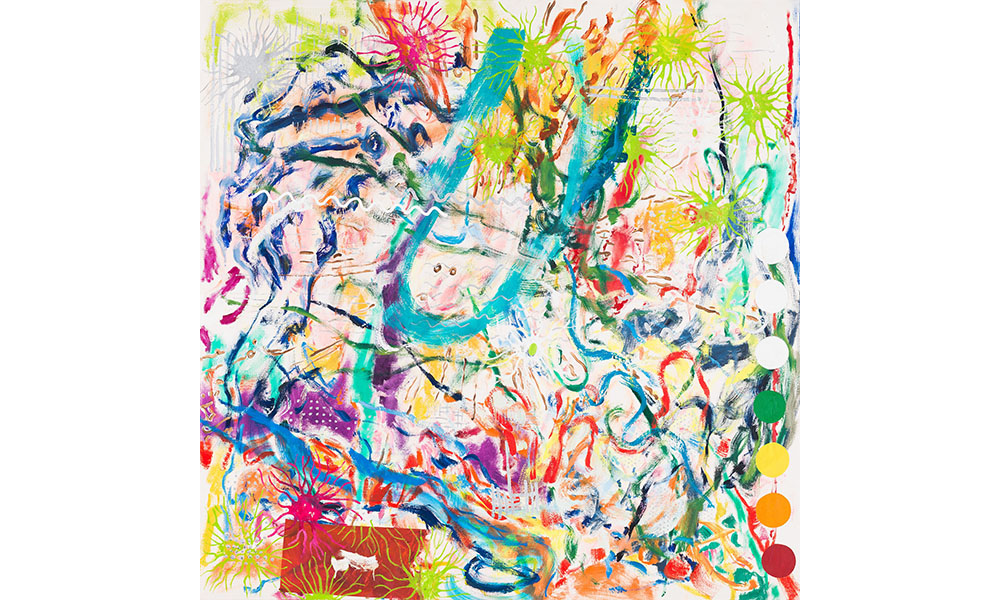 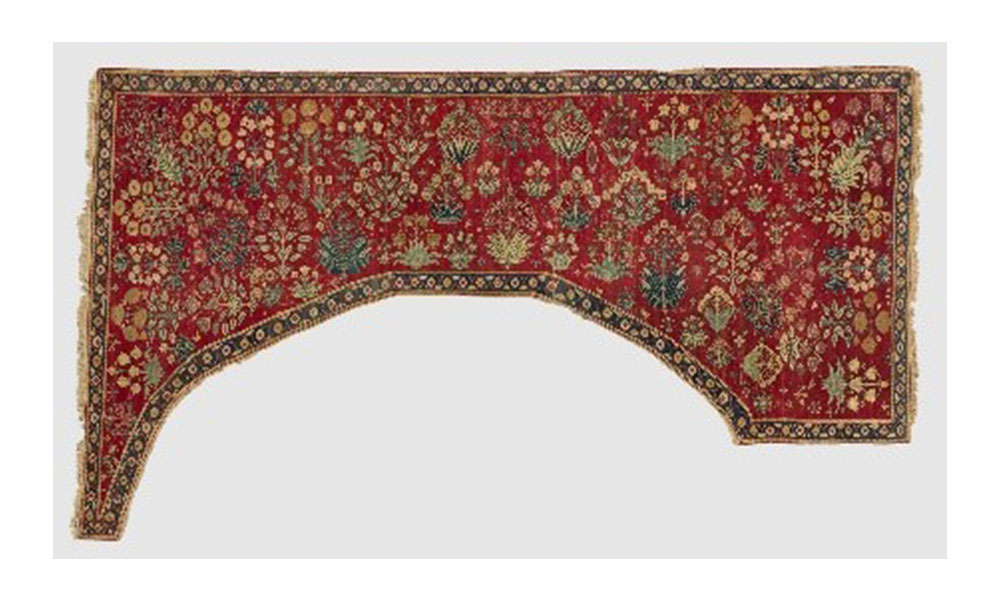 Precious Okoyomon asks us to reflect on our fears. Instead of succumbing to them, we burn them and create something beautiful from their ashes. We are to do this process again and again until we have planted not just one plant, but an entire garden. Cultures across time have used gardens as places for contemplation. They have even decorated their interior spaces with designs from nature to bring the outside in, such as this seventeenth-century Indian carpet strewn with a variety of flowers. What would your garden look like? 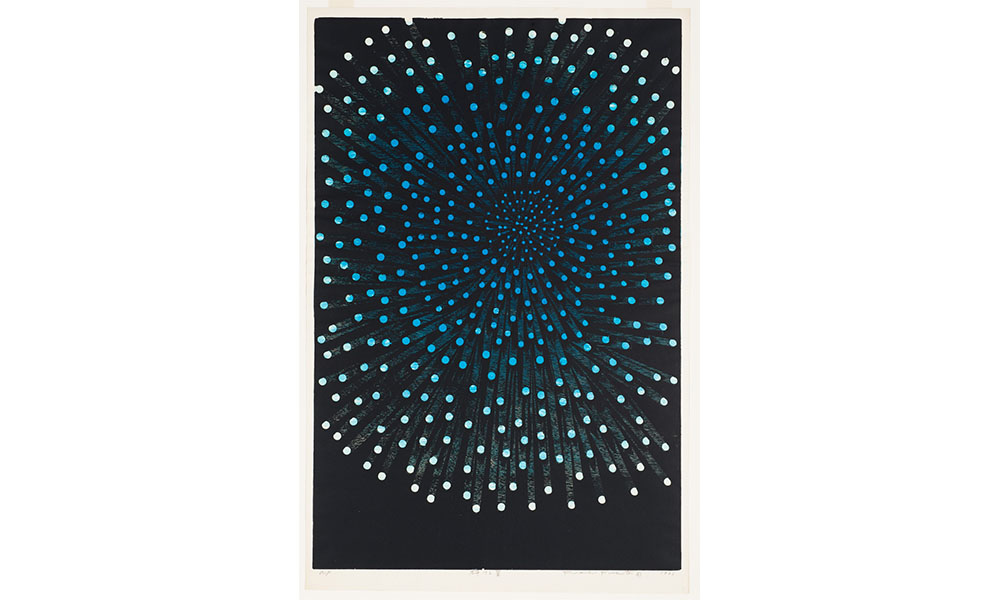 Humans have been gazing at the stars as long as we have existed. As we look upward, we create stories drawn across the sky. These myths are told through the constellations, stars grouped together to form characters, and characters connected to each other to form greater stories. Christodoulos Panayiotou has given you the power to create your own stars on your brow. What constellations do you see? 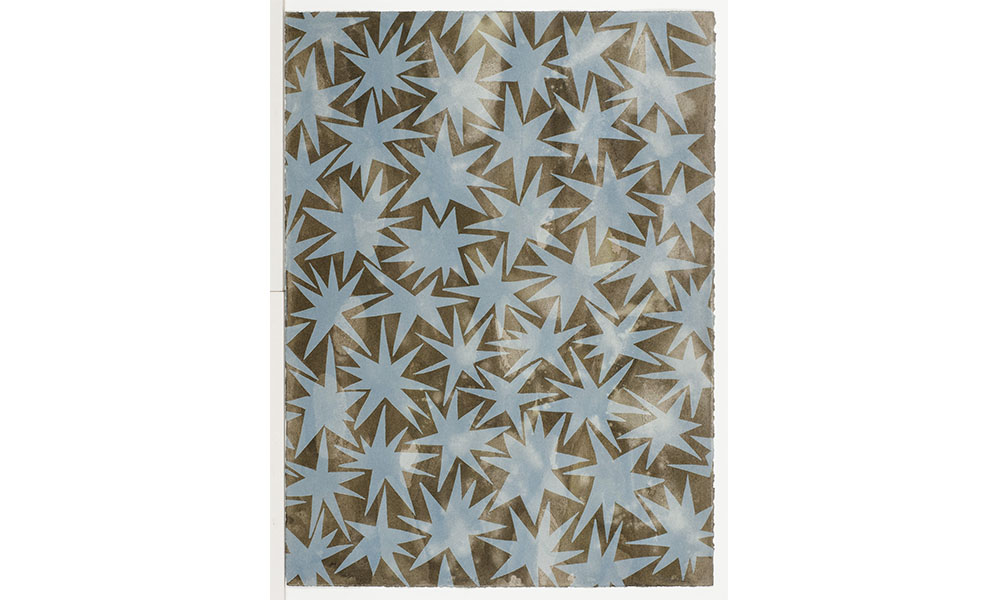 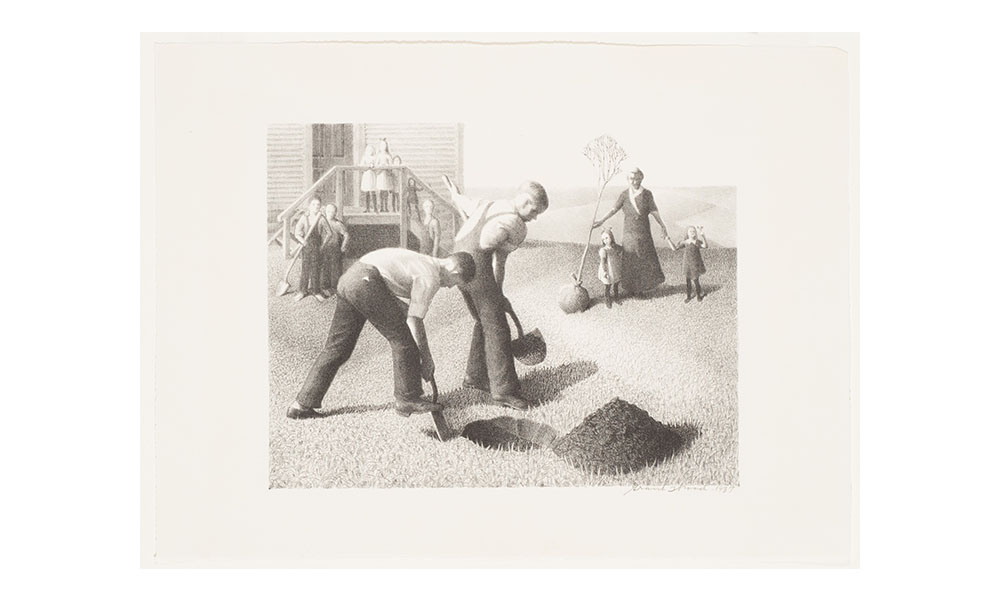 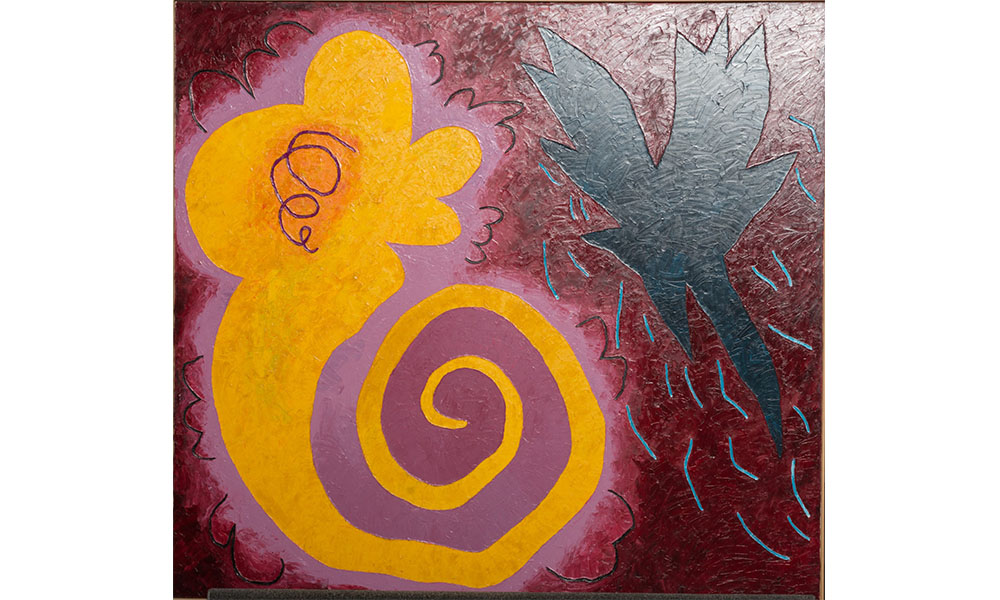 Thao Nguyen Phan’s Dig a Hole, Plant a Seed is a recognition of the beauty of life cycles. By cultivating nature, tilling the ground, and planting seeds, we have the power to encourage new life and watch it grow. Likewise, we encourage you to follow Phan’s steps, plant a seed, and watch it grow. Use that time to reflect on the beauty of the process. 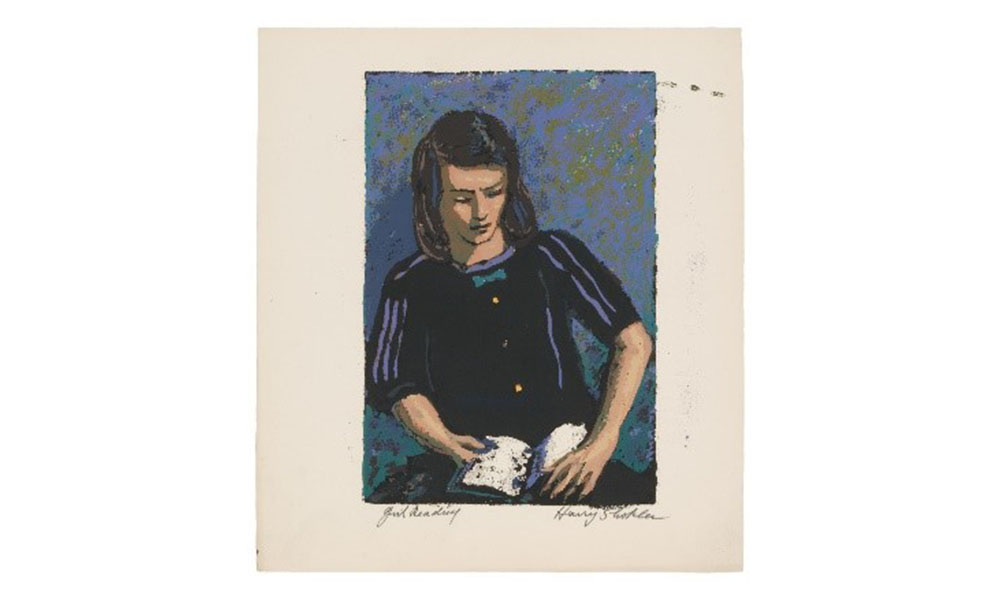 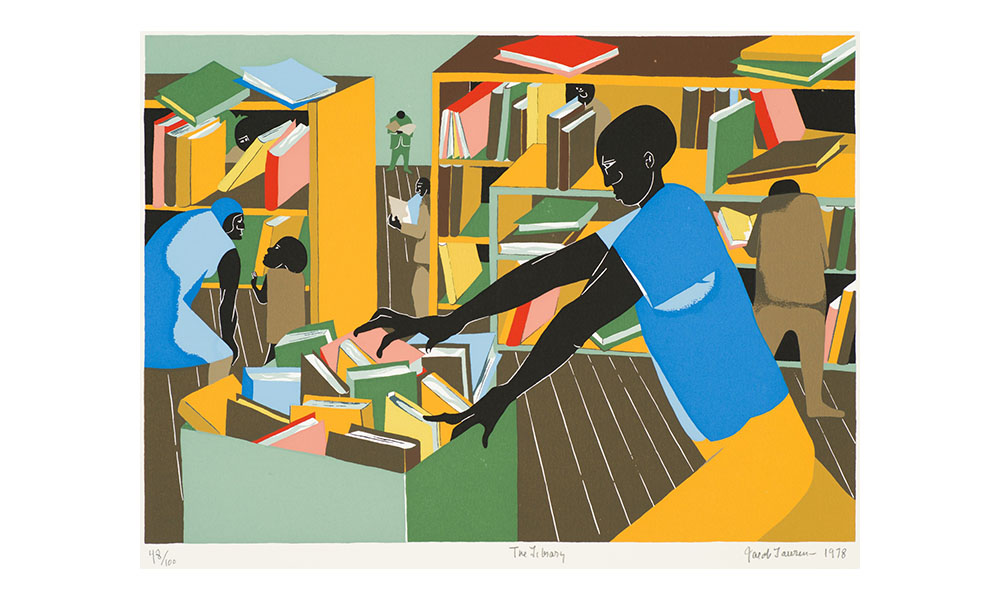 As you walk down the aisles of your local library or bookstore, you might find yourself undecided on what book to read. You scan the titles printed on the spines and imagine what stories that book contains. Raqs Media Collective is putting the power in your hands to create the titles and imagine the stories inside.

Show us your creation