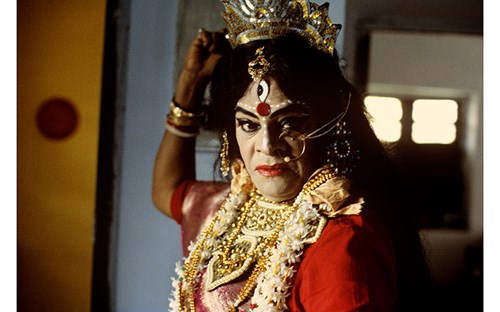 Photographer, filmmaker, and publisher Naveen Kishore (Indian, b. 1953) began his creative life in the theater. Intimate and intense, Kishore’s Performing the Goddess is a serial portrait that puts us in proximity with an actor’s private rite of transformation. Newly acquired by the museum, the seventeen photographs in Performing the Goddess depict the actor Chapal Bhaduri (b. 1938). Once famed for his work in jatra (a popular theater form in Bengali-speaking regions of India and Bangladesh), Bhaduri lost his prominence when women actors began to portray female characters previously played by men. Bhaduri instead found work as an itinerant performer playing the goddess Sitala, whom devotees worship for protection from disease. In Performing the Goddess, we witness Bhaduri’s reverent and precise nightly preparation for the role of Sitala and his exhausted stripping away of costume after the performance. Yet, we do not see the public performance itself. Kishore instead asks us to understand something about the complexity of Bhaduri’s interior experience.

This body of work resonated widely in the 1990s and early 2000s, a moment of new critical thought about the performative nature of gender. A companion film by Kishore, Performing the Goddess: The Chapal Bhaduri Story (44 minutes, 1999, available for viewing below), explores these connections through an extended first-person encounter with the actor.

Performing the Goddess: The Chapal Bhaduri Story, 1999, directed by Naveen Kishore. 44 minutes. Courtesy of the director and Chatterjee & Lal, Mumbai.

Tour with the Artist

This event is free for Members of the Friends of Photography & the Friends of South Asian Art, Islamic Art and Antiquities. Find out more about the Friend Groups at www.cincinnartmuseum.org/friends. For questions or more information, please contact the Membership Department at [email protected] or (513) 639-2966.