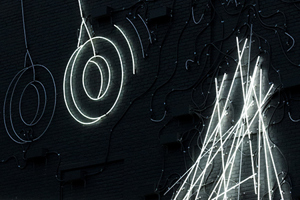 C A M P G R O U N D evokes a billboard one may still discover along a country highway. It advertises with the familiar vacation icons of tire swings and sparking campfires. The animated sign promises outdoor escape and primitive comfort against the massive holdings and complexities of civilization. The promise, however, hints at its own future of being unfulfilled as neon displaces “nature” and its white lines outline an artificial landscape.

In the summer of 2014, Luensman conducted a multi-faceted workshop with eight ArtWorks apprentices to explore the production of C A M P G R O U N D. They learned how neon lights are made, the basics of electronics and programming, and how to engage the community with public art. The apprentices created their own neon designs, screen prints, and electronic sculptures.

About the Artist
Anthony Luensman, born in 1966 in Cincinnati, Ohio, received a bachelor’s degree in Studio Arts from Kenyon College in Gambier, Ohio (1988). Over the course of his career, he has been granted numerous awards including the Efroymson Contemporary Arts Fellowship, Ohio Arts Council Fellowships, and Individual Artist Grants from the City of Cincinnati. He has had residencies and exhibitions in cities across the US and in Japan and Taiwan. He works across disciplines and often incorporates elements of light, sound, video, and sculpture.Luensman has received funding from the National Endowment for the Arts for two of his solo exhibitions. His work can be seen in the collections of The Cincinnati Art Museum and the International Contemporary Art Foundation/21c Museum based in Louisville, Kentucky.