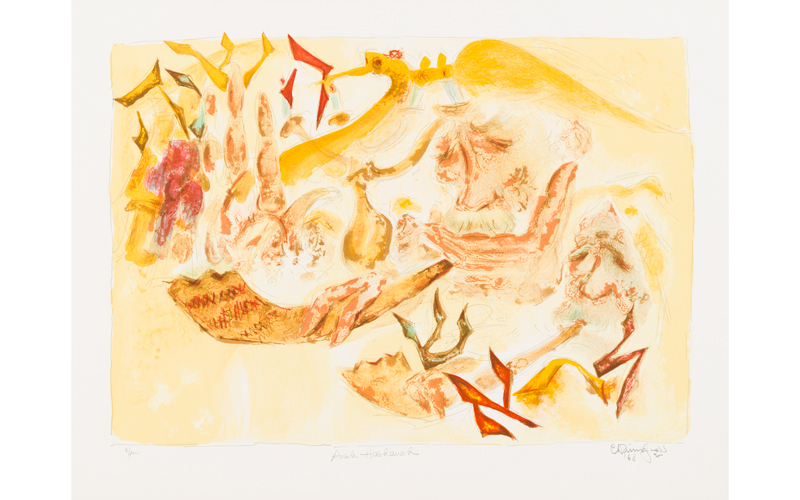 Chaim Gross (1904–1991) grew up in poverty in Eastern Europe, the youngest of ten children. His family were devout Hassidic Jews, whose faith expresses itself through rejoicing in life and facing its challenges with a festive, optimistic spirit. Central to this way of life was the weekly Sabbath and the necklace of holidays that sparked the drab year with color and light.

Before a young Chaim grasped abstract concepts like freedom, morality, repentance or history, these holiday celebrations captured his imagination, bound him in spirit to his family and his ancestors and filled him with values and ideals. Displaced during World War I, Gross immigrated to the United States in 1921 where he studied at the Beaux-Arts Institute of Design in New York.

In these lithographs, Gross recaptures the color of his childhood. His skill makes them come alive for those who have shared the experience. For those to whom this vanished world is mere history, Gross offers emotional insight as well as aesthetic pleasure. These festivals are still live today, but the form and feeling of their observance for four centuries in the Jewish world of Eastern Europe is gone. Though these lithographs, that world breathes again.

Gross worked with Rabbi Avraham Soltes (1937–1983) to create this portfolio. The lithographs and this exhibition are accompanied by an explanation of the ten holiest days of the Jewish calendar written by Rabbi Soltes who was ordained in 1942 at the New York campus of Hebrew Union College. This presentation in 2021 marks the 200th anniversary of Jewish community life in Cincinnati.