In preparation for the special exhibition Galloping Through Dynasties, I examined our Tang dynasty Dancing Horse after curator, Dr Hou-mei Sung, noticed an unusual tassel on the ceramic horse’s head, a detail not seen on other similar objects. I began my investigation by looking into the museum’s records, which revealed a complex history of damage as well as at least one restoration prior to the sculpture’s acquisition by the museum. Further analysis with X-radiograph and UV imaging revealed adhesive around the tassels, as well as dowels supporting several breaks. This damage is carefully hidden beneath layers of fills and overpaint covering the surface. With this evidence of extensive past alterations, we sought additional analysis to determine the authenticity of the tassels, particularly the head tassel.

Pietro Strobbia from the University of Cincinnati’s Department of Chemistry offered to help determine the composition 15Dancing Horse, Tang dynasty (618–907), 8th century, painted pottery, Cincinnati Art Museum, Gift of Carl and Eleanor Strauss, 1997.53of the tassels using Raman spectroscopy. Pietro also sent the samples to be analyzed at the Institute of Heritage Science in Milan, Italy, using X-ray diffraction, Fourier transformed infrared spectroscopy, and ionic chromatography.  The results of these studies, in both Cincinnati and Milan, provided valuable information regarding materials used in past repairs and importantly showed that the head tassel contains synthetic materials and is not terracotta. This information supports curatorial and conservation records suggesting the head tassel is not original and could be removed for further investigation. We removed the tassel by softening the adhesive, and it became clear there was no original point of attachment and modern materials had been used to reshape and attach it.

You can see the conserved Dancing Horse in the special exhibition Galloping Through Dynasties through January 1, 2023. 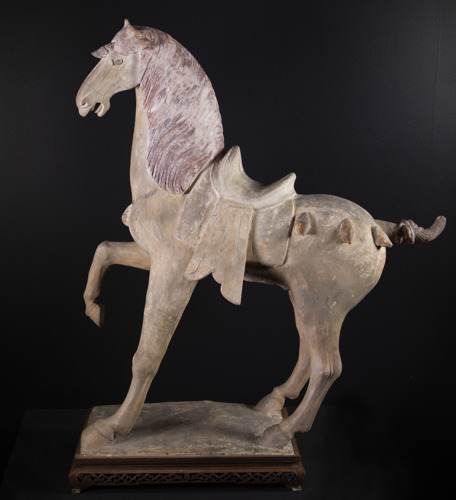 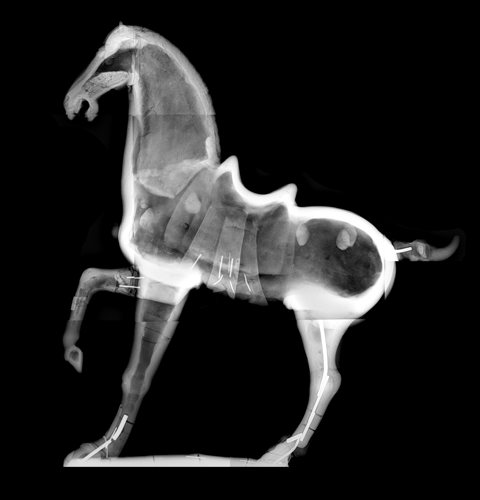