Behind the Scenes in Conservation: Cat Fight! 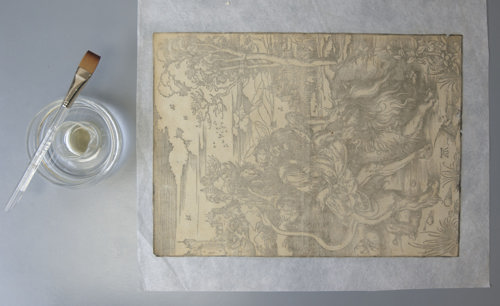 As the date for the opening of Albrecht Dϋrer: The Age of Reformation and Renaissance approaches, our paper conservator is completing treatments of prints for the exhibit.  Shown here during treatment is Dϋrer’s woodcut Samson Fighting the Lion, dated 1497-1498.  The print had suffered losses and tears, and before the museum acquired it, it had been adhered to a backing of strong rag paper.  The margins of the backing paper had been glued to an acidic window mat which stained and embrittled the backing paper (seen below before removal from the print).  The backing had protected the print from suffering more tears, and because the window mat did not touch the print, acids from the mat stained only the backing paper.  The adhesive used to attach the mount was water-soluble starch, so by humidifying the print, the adhesive softened enough to allow the backing paper to be peeled away from the print.  While the print is still strong, considering its age, a gentle method of removing the adhesive from the back was required.  Enzymes dissolved in warm water were brushed onto the back of the print, shown above, and after repeated applications, the starch broke down enough that it could be washed from the paper.  The tears were mended and small losses were filled locally with paper pulp, so the print did not require a new backing.  Samson Fighting the Lion and many more of Dϋrer’s prints will be on display in Gallery 234 beginning November 17. 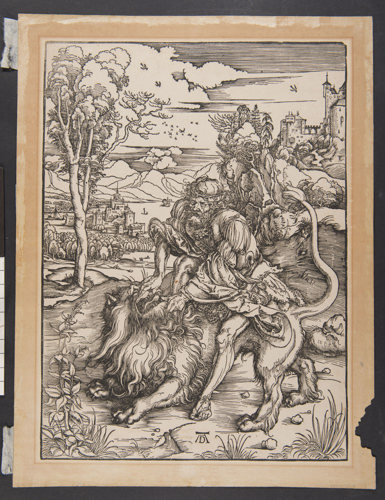