Behind the Scenes in Conservation: Making the Best of a Bad Situation 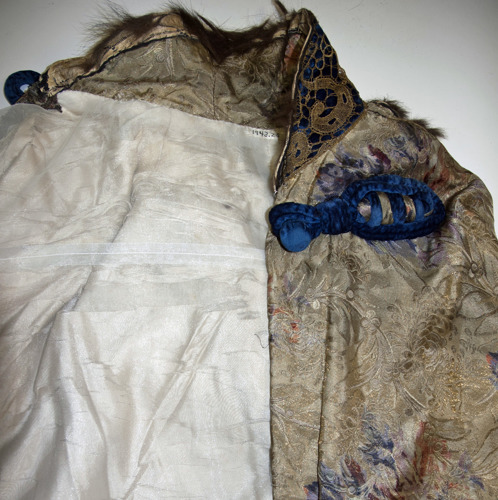 Often, a conservation treatment aims to make the best of a bad situation!  The silk lining of this early 20th century coat is one such “bad situation.”  Here, the coat is half opened so you can see the interior where the lining is virtually shredded; probably due to chemical degradation. It has been covered in a new, translucent covering fabric in a treatment called “encapsulation.”  The outside of the coat (the “shell”) is in good condition and you’ll be able to see it in a future exhibition, but there’s not much we can do to fix the lining. You won’t see the inside when it is dressed on a mannequin, so we chose encapsulation to preserve and protect what remains of the original lining.  The encapsulating fabric (here, a translucent polyester organza) is sewn over the lining following original stitch lines to prevent any abrasion on the fragile original and to protect and contain the pieces.