Behind the Scenes in Conservation: Announcing the Woman’s Art Club Exhibition 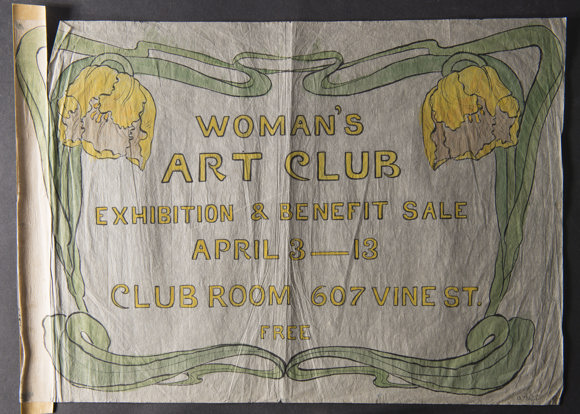 Anna Marie Valentien painted this invitation to an exhibition of work by the members of the Woman’s Art Club of Cincinnati.  It is undated but would have been painted after the founding of the Club in 1892 and before Valentien’s move to San Diego in 1908.  Like several of her sketches in the museum’s collection, this watercolor and ink drawing is on a very thin paper with a strip of gummed paper tape adhered along the left edge, presumably to make handling of the fragile paper easier.  Unfortunately, the design extends to the edge of the paper, and because the paper is so thin, the tape shows through.  The drawing is also torn along the edge of the thick tape.  Additional condition problems are multiple creases and a fold line down the center of the sheet.  Our paper conservator will use water vapor to soften the tape’s adhesive so it can be removed from the drawing without causing the watercolor to bleed.  While the solubility of the watercolor is an issue, a larger concern is the risk that the very sticky adhesive will make it difficult to separate the tape from the drawing without damaging the thin paper.  Initial tests show that the tape did not stain the paper, so treatment to reduce discoloration should not be necessary.  Moisture will also be used to relax the creases in the paper so it can be flattened.  The drawing is being repaired so that it can be shown in a display this fall that will celebrate the 125th anniversary of the founding of the Woman’s Art Club.  See the conserved drawing, and works by other notable artists who were early members of the Club, beginning October 6 in Gallery 123.