Behind the Scenes in Conservation: Bringing back a Cincinnati Brewer 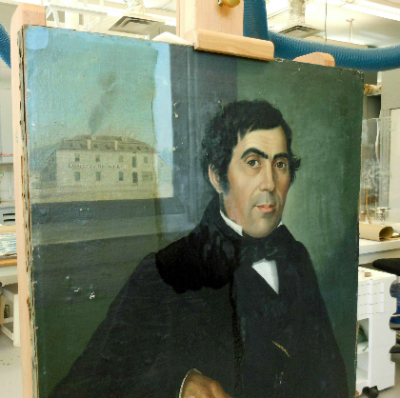 Our paintings conservator is tackling another dirty job. A recent acquisition, this anonymous 19th century portrait of Cincinnati brewer, Friedrich Billiods , is being cleaned.  (The Lafayette Brewery building to be uncovered behind him still stands in downtown Cincinnati.)  As you can see, not only is the varnish deeply discolored, but there is a thick layer of sooty black grime being removed along with it.  The canvas painting was clumsily glued to a ¼” thick sheet of gray cardboard before it entered the museum’s collection.  Labels on the cardboard from the “Chicago Cardboard Company” suggest this was done in the mid-twentieth century.  You can see along the left edge where the canvas was sliced off the stretcher so that the lining could be done.  The painting and its cardboard backing were then nailed through the paint on the front to the wooden stretcher.  These serious structural conservation issues will be addressed once the cleaning is completed.