Behind the Scenes in Conservation: Dirty Picture! 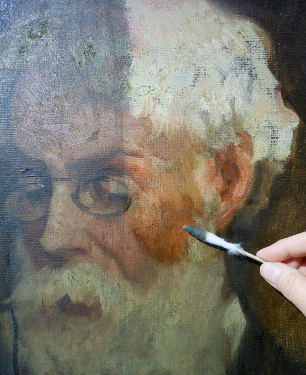 This picture, Head of Christopher Cranch, Study by Frank Duveneck, has the distinction of being one of the filthiest to visit the paintings conservation lab at the museum.  Usually when a conservator cleans a painting, chemical solvents are used to dissolve a discolored varnish layer, but sometimes there is so much dirt and grime on the surface that the varnish cannot even be seen.  It isn’t possible to see whether or not the varnish coating is  discolored.  As a matter of fact, on this portrait, once the dirt was completely removed our conservator was able to see that there is no complete varnish layer on the painting.  It is an unfinished work that the artist partially varnished while he was still applying paint.  So while the painting will not be cleaned further, removal of the dirt on the surface has transformed the portrait.  Look for it to be on view in a major Duveneck exhibition planned for 2019.