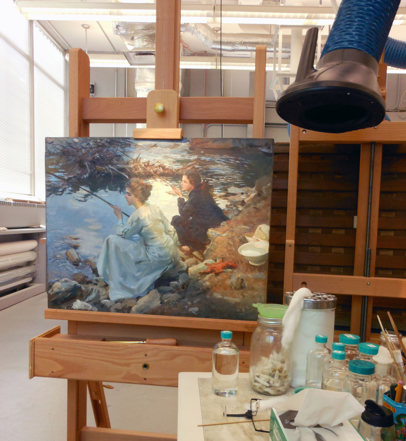 This summer Two Girls Fishing by John Singer Sargent (1856-1925) has been in the paintings conservation lab to be cleaned.  The painting was acquired by the museum in 1918, a mere six years after it was painted.  It is in near perfect state of preservation, probably largely due to its having been in a museum collection for most of its life.  The canvas has never been lined or removed from its stretcher.  Indeed most of the tacks that secure it to the stretcher have never been removed or replaced.  Cracks in the paint are minimal, and are mostly related to the oil paint drying during the past century.  While the painting was varnished in the 1960s and 1980s, our paintings conservator was able to remove these coatings and determine that the work was never intended to be varnished.  In fact, using ultraviolet illumination, she could see that the only area Sargent varnished was the lower right corner.  Here he signed “John S. Sargent 1912” in brown paint on top of his local application.  Since the varnishes from the 60s and 80s were slightly yellow and grimy, the scene now has a noticeably crisper and cooler tone.  When the conservation treatment is finished, the unlined and now unvarnished painting will be reframed with high quality low-reflectance museum glass in order to protect it. Two Girls Fishing is going out on loan this fall, so look for it to return to our galleries next year.