Behind the Scenes in Conservation: Masterpieces of Japanese Art 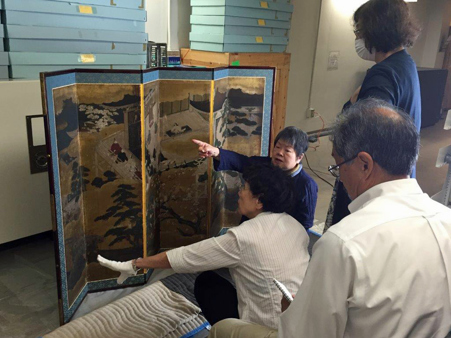 The Museum’s Masterpieces of Japanese Art exhibition continues to attract international attention, months after it closed.  Our paper conservator spent time last week with scholars who are researching illustrations of The Tale of Genji, an early 11th century Japanese novel, believed by many to be the first novel ever written.  Midori Sano, Professor of Gakushuin University in Tokyo and Masako Watanabe, PhD, formerly of the Metropolitan Museum of Art, examined several Japanese paintings, including seven of our folding screens.  They are seen here with the Museum’s Curator of Asian Art, Hou-mei Sung, and John Teramoto, Curator of Asian Art at the Indianapolis Museum of Art.  The folding screen they are examining is entitled Presentation of a Prince and depicts a scene from the first chapter of the book when Genji is presented to the emperor.  Their scholarly visit gave us important information to add to what we already knew about the paintings in our collection.  This rare and important painting is attributed to the female artist Chiyo Mitsuhisa, and our visitors confirmed that the unsigned Presentation of a Prince was painted during her lifetime in the late 16th-early 17th century.