Behind the Scenes in Conservation: Rocks at Belle-Ile, Port-Domois by Claude Monet 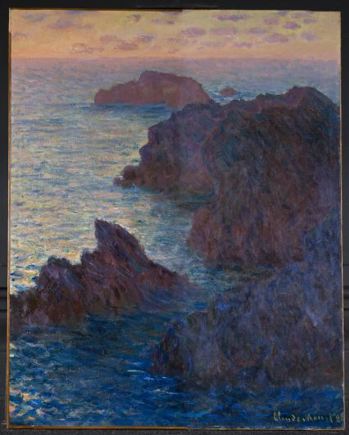 Our paintings conservator is working on one of the prettiest pictures at the museum, Rocks at Belle-Ile, Port-Domois by Claude Monet (1840-1926).  Purchased by the museum in 1985, it arrived covered with a glossy synthetic varnish that had probably been applied not long before it was acquired.  Over the years the thick glossy varnish had turned slightly yellow.  Recent scholarly research about the Impressionist painters suggests that that Monet very likely did not intend this painting to be varnished.  In this photo, the discolored varnish has been removed from the right side of the picture, along with the brown paper tape that was added during a 20th century lining. The effect of the pale yellow film on the deep blue and violet seascape can be seen when comparing the two halves of the scene.  The unvarnished side has a cooler, bluer, hazier, misty-er appearance that is in fact more ‘impressionistic.’  When the varnish removal is finished our Monet is headed out on loan, but when it returns be sure to check out its cooler look.